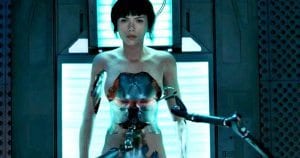 Maybe when you hear that term, you think of older films from a less enlightened time.* Examples like whites in blackface in Birth of a Nation, Mickey Rooney’s breathtakingly racist portrayal of a Japanese man in Breakfast at Tiffany’s, or Natalie Wood playing a Puerto Rican teen in West Side Story. It’s easy to shrug those off as relics of the bad old days.

But the problem is, it’s still happening. Jake Gyllenhaal playing a Middle Eastern adventurer in Prince of Persia. Emma Stone playing a woman of Hawaiian and Chinese descent in Aloha. Is it being done out of malice? I don’t think so. My gut tells me it comes from a place of embarrassing ignorance. One might even call it…privilege.

But what does this all have to do with Scarlett Johansson and her new film Ghost in the Shell? I’ll get to that, but there will need to be some major spoilers. If you don’t want to be spoiled, yet want the gist of the review, you can walk away knowing that the film looks great, but it’s dumb as hell and not just a little #problematic.

Spoilers lurk beyond this sentence.

First thing, let’s talk about the film itself. We’re introduced to Major (Scarlett Johansson), a cyborg woman living in a nameless city in The Future. We know it’s The Future because of holographic ads, multistory highways, and an absolute plethora of robots. Major works for Section 9, an antiterrorism team tasked with hunting down Very Bad People. Section 9 is operated by the Hanka Corporation and during a business meeting, one of the company’s top scientists is brutally murdered by a geisha-bot.**

Against the orders of her boss Aramaki (the great “Beat” Takeshi Kitano), Major springs into action. She demolishes the luckless geisha-bot along with a team of terrorists. But this isn’t just another day at the office for her. She’s drawn into a vast conspiracy, and questions everything she thinks she knows. Is there more to the kindly scientist Dr. Ouelet (Juliette Binoche), who developed Major’s cybernetic body, than meets the eye? Do the glitches she’s experiencing mean her superiors are lying to her? Is the terrorist leader Kuze (Michael Pitt) hiding a shocking secret that will rock the foundations of her world? Will her fellow operative and Dolph Lundgren lookalike Batou (Pilou Asbaek) betray her?

It’s all based on the revolutionary 1989 manga by Masamune Shirow and the even more impressive 1995 anime. In particular, the anime asked pointed and probing questions about the nature of identity in a world of accelerating technology. There’s a reason it’s considered to be one of the greatest achievements in anime. You have gorgeous animation, mind-blowing visuals, and a very smart script. As a matter of fact, you should avoid watching the soulless remake and just go check out the anime.

Unfortunately, I have to keep reviewing the remake and ethically cannot just check out now. But before we get to savaging this effortlessly dopey film, let’s say a few nice things. It’s not as if Ghost in the Shell is incompetent from start to finish. Director Rupert Sanders, best known for the dreadful Snow White and the Huntsman, creates some truly impressive imagery. There’s the aforementioned geisha-bot, glittering skyscrapers, and impressive CGI showcasing Major’s robotic frame. “Beat” Takeshi is cool and charismatic as usual, and I particularly enjoyed the lighter moments with Major and Batou.

But kickass visuals and some pleasant performances do not a good movie make. There’s a fun trend in Hollywood where the studios latch onto an impressive foreign film, remake the film, and methodically remove everything that made the original matter in the first place. Ghost in the Shell is no different. Sure, the film begins to raise intriguing philosophical questions, like how cybernetic upgrades change the nature of humanity. As soon as it does, it positively sprints away from examining them by either throwing another slick image at us or having a character mention to Major that she’s the first of her kind. Seriously, this happens over a dozen times. The remake doesn’t want to get into these concepts because the studio is likely afraid it will make the remake too cerebral for foreign markets. Trust me, they can handle it.

I suppose I can see why Scarlett Johansson took the role of Major. She had a perfectly respectable acting career humming along until 2010 when she took the role of the Black Widow in Iron Man 2. Now, she’s the female action star on the planet. You can’t blame her for wanting to get out of the MCU occasionally and enjoy the spotlight. Unsurprisingly, she’s good here. Johansson has a real knack for contrasting her muscular physicality with emotional vulnerability that many of her characters desperately try to conceal. Even when trying to sell nonsense here about how memories don’t matter to human identity and actions are what’s important, she’s compelling.

But here’s where we take a deep dive into spoiler territory. Initially, Major is told that her family was killed in a boating accident and that she was the only survivor. Close to death, the scientists at Hanka transplanted her brain into the body of a cybernetic killing machine. However, during the film’s climax, Major learns the shocking truth. She was actually a Japanese runaway who was kidnapped and experimented upon.

Simply put, she was a Japanese girl who was transformed into Scarlett Johansson. That’s not just problematic, that’s problematic squared.

I get it from the filmmakers perspective. If you can have Scarlett Johansson be the lead in your movie, do that. Movie stars don’t matter much anymore in America, but they’re still a big deal in the rest of the world. The thing is, Johansson was cast in the role over a year ago and, even then, people were saying, “Guys, that’s maybe not such a hot idea.” Yes, I know the character is based on an anime character who has been constructed piecemeal and, yes, I’m aware that there’s a degree of racial fluidity in anime and manga. But, for Christ’s sake, look at the optics! Maybe it doesn’t make the filmmakers look racist, but it absolutely makes them look stupid.

Besides, representation for people who aren’t straight white men is a problem, but the appalling lack of representation of Asians is a huge problem. Can you think of at least 5 major films made recently where an Asian is the lead and not a sidekick or supporting character? I’d need to do some serious research to come up with 5, and that’s not okay. Would it have killed the production to cast an Elodie Yung, for example, in place of Johansson? Their response would be that they needed a major star. I’d remind them that in 2014, a movie was made featuring a talking tree, a gun-toting raccoon, and the goofy guy from Parks and Recreation. Guardians of the Galaxy was a monster hit, and all because Marvel Studios was willing to take a risk. You expect me to believe that casting an Asian woman in a blockbuster is too risky…in 2017? GTFO with that.

However, what’s done is done, at least according to this film. Ghost in the Shell is going to make some money, both here and abroad. Everyone involved will walk away from the experience and go onto other projects. But will this film have any kind of positive legacy? Is it something that, years from now, will inspire someone to create smart science fiction with a multi-ethnic cast and crew? No. They had a great opportunity, and they blew it.

*It’s not like we’re living in an intellectual Renaissance now.

**The scientist is played by Michael Wincott, the gravelly-voiced actor from The Crow and Robin Hood: Prince of Thieves. He has a puckish charm and always elevates foolishness like this. Wincott getting killed nearly immediately was a dire warning for me.

Tim Brennan
Tim has been alarmingly enthusiastic about movies ever since childhood. He grew up in Boulder and, foolishly, left Colorado to study Communications in Washington State. Making matters worse, he moved to Connecticut after meeting his too-good-for-him wife. Drawn by the Rockies and a mild climate, he triumphantly returned and settled down back in Boulder County. He's written numerous screenplays, loves hiking, and embarrassed himself in front of Samuel L. Jackson. True story.
Tagged: ghost in the shelljuliette binochemichael pittpilou asbaekrupert sandersscarlett johanssontakeshi kitano