I spend a lot of my time doing things by myself. I would like to play a team sport like soccer, but I don’t have enough social skills to handle that, and so I run marathons instead. Sometimes this singularity bothers me more than others. Mostly, I’m OK with it. It provides connections I would not otherwise make. When you venture out alone and decline the Succubus of your cell phone, the world offers you unexpected opportunities. Such was the case when I found myself without a biking buddy one Wednesday night and so I pedaled myself down to the Denver Cruiser bicycle ride all by myself.

A word about Denver Cruisers: it has nothing to do with gay sex. It’s a group bike ride where a gang of bicycle enthusiasts pick a theme, make a costume, meet up downtown, and then bike around in a big cluster. I suppose you could throw some sex, gay or otherwise, in there, but I don’t know anyone who does that. It’s just a great reason to put on a goofy costume, blast some music through your Bluetooth speaker, and have fun with bikes on a lovely summer evening—or even a downpouring summer evening. The evening culminates in the Circle of Death, where we all ride our bikes in a tight circle together, as if trying to reform a nascent galaxy out of greasy sprockets and brake levers.

I love the group rides and the Circle of Death part in particular. They remind me so much of the awkward wedding dances that I also love. From the Masai jumping around their campfires to the Boot-Scootin’ Boogey in a juke joint, whenever humans feel the need to celebrate or bond, we get in a line and shuffle sideways. It’s just what we do. Rhythm is a bonus, but certainly not required. Group rides are how cyclists symbolically shuffle sideways—the Circle of Death celebrates our Wheels of Life. Yes, that’s sappy, but I’m standing by the statement. 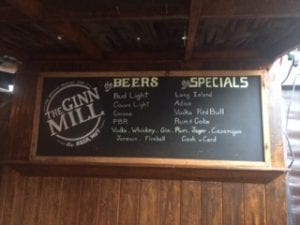 But let’s get back to attending the Cruiser ride by myself. I had recently joined a Facebook page (practicing social skills online!) and I posted a mention about going to the Cruiser ride. An unknown person replied that they’d like to meet up there. So yeah. Now I had a new friend, right? I pulled up to the Ginn Mill and spotted someone who looked like they were the target individual. We went inside and up to the bar.

We got our drinks and proceeded to have a fascinating conversation about the many kinds of orgasms in the world, which is objectively the best conversation topic possible upon the first meeting of a new friend. Also, they removed their jacket to reveal a Bike Smut t-shirt, personally modified, which would have won my heart in any scenario, on any person, with the only possible exception being Rodrigo Duterte.  Then a bossy dude with a loud whistle trundled through and herded us all outside to ride through the rainy night.

A pair of other riders had a matched set of ginormous golden retrievers jogging happily along with their bikes and graciously accepting mountains of pats and praising at all the stopping points. I don’t have a dog, but I turn into a quivering column of jelly in the presence of any canine. Sometimes I consider adopting a dog as a way to expand my socials skills; it would make introductions so damn easy. 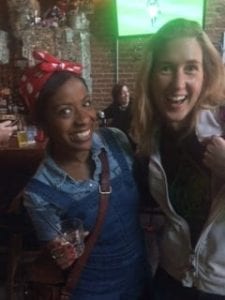 I tried a similar trick the next week—posting on a subreddit (practicing my online skillz!) and seeing if I could find anyone to meet up in person. It worked again! Someone said they would be there, and so I pedaled down to the bar and loitered my way around, looking for friendly faces. It was slightly harder this week, since a lot of the faces were obscured by masks. The costume theme was “Superheroes.” My personal favorite was a Rosie the Riveter get-up; I adore that the costumer chose to classify Rosie as a superhero. She certainly is one of mine. The gal dressed as Rosie is a woman of color and an entrepreneur. Her dating partner is a skinny white guy.  I talked to them both for a bit. The partner asked if I liked Cruisers.

“Yes,” I said. “But that dude with the whistle is real bossy. I don’t know who he is or if he actually has any earned authority. He just shows up and blasts that whistle and expects everyone to follow him. It’s such a straight-white-guy’s privileged approach to leadership.” 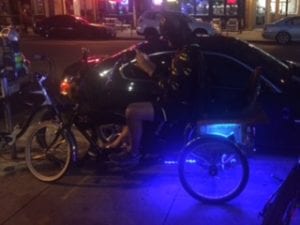 I may have been one drink in when I made this statement. Rosie seemed to agree with it, though. In fact, she seemed on the verge of rupturing a gut, she was laughing so hard.

“Hmm,” the guy said. “Sounds like a real jerk. Probably someone named Jeff.”

“Yeah!” I replied. “Jeffs are universally terrible. I never date guys named Jeff just on principle.” Which is a true fun-fact about myself.

The dating partner offered his hand to me.

Rosie and Jeff were not the person from the subreddit; I did eventually find that person. Well, what I did was, I cruised around the patio where they said they would be and spotted someone wearing the costume that matched the description I was given. 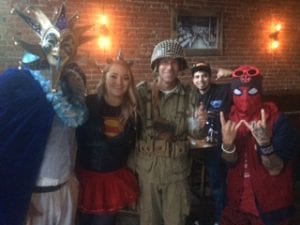 You know that feeling when you see someone and just think…”Nope.” There’s nothing *wrong* but you just have zero interest in anything about them. They might be telling you about how they won an Oscar for their work on the Nobel Prize in collaboration with Mother Teresa… and you would be yawning and concocting an excuse about needing to update your Twitter feed just to get out of there? It was that feeling. Does that make me judgmental? Yes. Yes, it does.  I’m working on it. It’s number three on my list, right behind “remember names” and “don’t use out-loud the appearance-based name mnemonics I invent for people.” I just quietly cruised on by, and went back to the bar and accepted someone’s offer of a 10mg edible, because what the hell, they seemed like nice, reliable people. There’s no aphorism about taking candy from strangers, is there? My judgements are based on as much reality as Wayne LaPierre’s clothing budget. Then Jeff blew his whistle and we all poured ourselves onto our bikes and rode around in the lovely summer twilight, doing our best to shuffle sideways.

Jessie Hanson
Jessie Hanson lives and works in Denver and couldn't be happier about it. Like the best-possible kind of Jekyl-and-Hyde scenario, she splits her life between science and storytelling. During the day, she performs clinical diagnostics and messes around with test tubes. At night, she performs behind the mic as a standup comedienne, in the air as a circus aerialist, and in rhinestones as burlesque dancer. She begrudges the hyper-inflated cost of a decent pair of false eyelashes. When she's not on stage, she sweating it out as an endurance athlete in triathlons and marathons across the West. She begrudges the hyper-inflated cost of a decent pair of running shoes. She's thrilled to be on board with OnDenver and writing about science, comedy, circus, athletics, and general fun on the Front Range!
Tagged: bikesgroup ridesocial mediasummer