Crawling For An Oscar 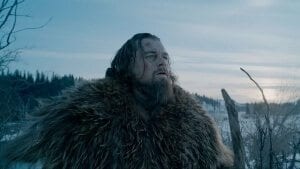 A great film doesn’t have to be subtle. Sometimes it shouldn’t be, depending on what the story is about and how it is told. Oliver Stone is genetically incapable of subtlety, but JFK and Platoon are a couple of the greatest movies ever made.

Along similar lines, one of the big myths in filmmaking is that a great film is birthed out of a difficult production. Francis Ford Coppola nearly went insane making Apocalypse Now. Werner Herzog almost murdered his leading man and forced laborers to drag a steamship through the jungle during the filming of Fitzcarraldo. Uncooperative puppets almost broke the spirits of Trey Parker and Matt Stone while they worked on Team America: World Police. You get the idea.

But a great film should, first and foremost, be immersive. You should sink into the world of the film. You should be emotionally invested in the characters. It should feel as real to you as your life. Problem is, it’s tough to achieve that immersion when the filmmaker is shouting in your ear, “LOOK HOW BRILLIANT I AM!” Alejandro G. Innaritu is very much a “Look at me” kind of director, and he continues that annoying trend with The Revenant.

Loosely based on the true story of frontier trapper Hugh Glass, and the 2002 novel by Michael Punke, the film is set during 1823 in the savage wilds of North America. Hugh Glass (Leonardo DiCaprio) is a guide for a fur trapping expedition out in the middle of nowhere. He’s accompanied by his half-Native American son Hawk (Forrest Goodluck), and the two tend to keep to themselves and try to avoid loud-mouthed racist Fitzgerald (Tom Hardy). Things go south pretty quickly when the expedition is attacked by a raiding party of Native-Americans. The tribe is seeking the kidnapped daughter of their leader, and they’ll kill anybody in the way. Most of the men are slaughtered, and the survivors escape.

Captain Henry (Domhnall Gleeson) orders the men to hide their remaining pelts and return to base, which is an isolated fort located far from them. Fitzgerald obnoxiously disagrees with the plan, and to really show what a class act he is, decides to antagonize Glass and Hawk. During all this squabbling, Glass slips away from the group for some much needed quiet. This turns out to have been a tactical error since he accidentally gets between a bear and her cubs. Mama Bear is a trifle pissed at Glass and proceeds to absolutely maul the hell out of him.

Things aren’t looking good for Glass’ survival. Henry decides to split the group up. The majority of them will head for the fort while a small group of Fitzgerald, Hawk, and newbie trapper Bridger (Will Poulter) stay behind to offer comfort to Glass until he dies. You will be entirely unsurprised to learn that Fitzgerald quickly gets tired of watching a guy he doesn’t care about die slowly. He stabs Hawk to death and buries Glass alive, proving that he is not, in fact, much of a team player. A revenant is defined as a person who returns as a spirit after death. Glass essentially rises from the dead and goes after Fitzgerald. With horrific wounds and broken bones, Glass crawls through the wilderness seeking retribution.

Given this description, you would think The Revenant is a great film, one that plunges viewers into frigid isolation that mirrors the spiritual desolation Glass feels. It’s a great looking film, that’s for sure. Emmanuel Lubezki, Innaritu’s cinematographer, shoots the film with natural light, creating massive horizons that go on endlessly and colors that seem both natural and enhanced. The production itself was apparently a massive pain in the ass. Shooting in natural light meant that the crew could only shoot scenes for a few hours a day. On top of that, the crew had to contend with extreme cold and primitive conditions.

There are great performances, without a doubt. I’m not sure I entirely buy DiCaprio as a grizzled frontiersman, but he certainly gets an A for effort. He crawls, grimaces, rides, shoots, eats a raw bison liver, and is submerged in freezing rivers. He doesn’t have much of a character arc, given that he begins the film as a broken husk of a man, and ends as an even more broken husk of a man. He does good work, but never disappears into the role. Glass is a character fueled by a mad need for vengeance, and DiCaprio only shows us a few glimpses of what drives him. DiCaprio is the favorite to win a Best Actor Oscar, and I suspect if he wins, it will be for his body of work rather than this role. He’s an actor that has done outstanding work for years,* and he never phones it in.

As Fitzgerald, Tom Hardy completely disappears into the character. He sinks into his grimy furs and shows us a thoroughly unlikable son of a bitch. Fitzgerald is argumentative, arrogant, selfish and cowardly. Hardy has a weird, mumbling accent and, along with his strange internalization, has made a thoroughly entertaining performance. He has excellent chemistry with Will Poulter as the young Bridger. The pity is that Poulter delivers the film’s best performance, and he’s totally overshadowed by DiCaprio. As the youngest member of the expedition, Bridger is caught up in the antagonism between Glass and Fitzgerald. He watches Fitzgerald commit atrocities, he reluctantly follows orders, and the guilt consumes him. Poulter shows us everything and lets us feel it honestly.

So why is The Revenant not a great film then, Mr. smarty-pants critic? It’s because of Innaritu getting in his own way. There are shots that are composed with painterly care, beautiful sequences created with controlled precision. But the movie floats above the story it’s trying to tell. The story of Hugh Glass and his encounter with a killer bear is one of horror. It’s the horror of isolation, of being ground into the dirt, and the feeling that nature is indifferent to his suffering. It’s about a man overcoming all of that through hate. It’s an ugly story, but Innaritu doesn’t want to get his hands dirty. Instead, he wastes time showing off his filmmaking prowess which keeps us at arm’s length from the material. Yes, he shot the film with natural light, but that doesn’t enhance the story or give us insight into the mental landscape of the characters. All it is is a gimmick, and a pretentious one at that.**

In an interview with the Financial Times, Innaritu was quoted as saying, “I don’t consider [my] film a Western. Western is in a way a genre, and the problem with genres is that it comes from the word ‘generic,’ and I feel that this film is very far from generic.” This statement is not only ostentatious, but it displays a profound misunderstanding of the strength of genre filmmaking. Genre allows us to take a categorical framework and build something unique within it. Westerns all have horses and guys with cowboy hats, right? Blazing Saddles, Unforgiven, and Brokeback Mountain are all Westerns and contain horses and cowboy hats, but they’re very different films telling specific stories in a specific way. As a result, they all became masterpieces, and all without sneering at the Western genre.

Innaritu is an undeniably talented filmmaker and a good storyteller, but he’s developing a nasty habit of becoming insufferably artsy. Instead of showing off directorial tricks, he should concentrate on creating something emotionally real. Then I’ll be really impressed.

*What’s Eating Gilbert Grape, The Departed and The Wolf Of Wall Street are just a few examples.

**Innaritu has an irritating habit of using gimmicks in his films. 2014’s Birdman had the gimmick of having been shot in one take. While I’m sure that was a fun technical challenge, it didn’t actually improve the film.

Tim Brennan
Tim has been alarmingly enthusiastic about movies ever since childhood. He grew up in Boulder and, foolishly, left Colorado to study Communications in Washington State. Making matters worse, he moved to Connecticut after meeting his too-good-for-him wife. Drawn by the Rockies and a mild climate, he triumphantly returned and settled down back in Boulder County. He's written numerous screenplays, loves hiking, and embarrassed himself in front of Samuel L. Jackson. True story.
Tagged: alejandro g. innaritudomhnall gleesonforrest goodluckleonardo dicapriomark l. smithmichael punkethe revenanttom hardywill poulter