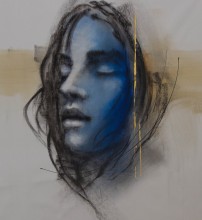 Clayton Lane Fine Art is a gallery in Cherry Creek that prides itself on an expansive collection of works from world-class artists, showing exclusive works and special editions from more than fifty well-established names. They specialize in realism, impressionism, and abstractionism. Their exhibitions cover many types of media including paintings, sculptures of various sizes, and intricate bronzes. Regardless of your art experience, Clayton Lane caters to all levels of art lovers and collectors.

Their latest exhibition is a solo show by artist Andre Desjardins. Desjardins is an accomplished artist originally from Canada. He earned a Bachelor’s degree in art from the University of Quebec and started a marketing firm after college. Fourteen years later, however, he became disenchanted with the marketing world and decided to pursue his dreams of becoming a full-time artist. He worked as a painter and sculptor, blending humanist and expressionist influences into a unique style he calls Visual Emotionism. Desjardins’ creations are part of collections throughout North America and Europe, including at the Monument National in Montreal and the ArtExpo in New York. 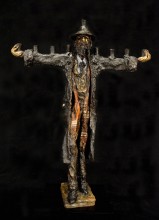 Also on display is a series of Gib Singleton’s work. Born in Missouri in 1935, Singleton first became enthralled with art at age 9, winning a blue ribbon at a state fair. By sixteen he had begun construction on a makeshift foundry. He would go on to become a giant in the sculpting world, specializing in bronze. True to his conservative upbringing, Singleton focused mostly on religious influences for his style of work, which he named Emotional Realism. His work was well-known worldwide and was included in numerous collections. His most notable piece (arguably) is a cross made to sit atop the crosier of Pope Jean Paul II. Another one of his crosses sits near the Shroud of Turin in Italy. Singleton continued to create western and devotional bronze sculptures up until his death in 2014. 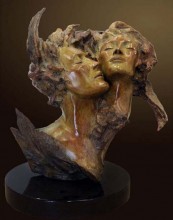 Clayton Lane is also home to an extensive collection of works by Dr. Seuss. They have many of his books masterfully bronzed and artfully decorated with characters from the stories jumping off of the pages. They have a collection of illustration art depicting scenes from his books. There’s a series of unorthodox taxidermy, full of wildly fun, artistic imaginings. They even have some of his secret art and archive works rarely seen by the public.

Clayton Lane Fine Art boasts a vast collection of fine art from highly distinguished artists. Their exhibitions feature spectacular paintings, sculptures, bronzes, and much more. They also employ experienced gallerists that are happy to assist with any aspect of of art collecting. They’re located at 120 Clayton Lane in Denver. Gallery hours are 11-7 Tuesday thru Saturday. For more info, check out their website at claytonlaneart.com.

Jared Herzing
Jared is a local content contributor and aspiring author. He was fortunate enough to grow up in Golden, Colorado and graduated from MSU Denver. While an insatiable love of travel lures him all over the world, his roots remain firmly planted here. He enjoys writing short stories, poetry, children's books, societal observations, and everything else. A nature enthusiast and sunshine connoisseur, Jared is perfectly at home on any mountaintop or patio. He frequents art galleries and concerts, poetry readings and breweries, museums and bookstores. When he isn't making neighbors cringe at his musical attempts he can be found on a snowboard or sailboat, depending on the day. A perpetual adventurer and eternal patron of the road less traveled.
Tagged: art sceneClayton Lane Fine ArtsDenverDr. Seusspaintingssculpture