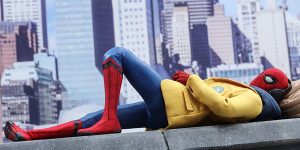 It’s hard to make a good movie. It’s even harder to make a good superhero movie, and Marvel Studios makes it look so easy. Through intelligence, wit, and sheer perseverance, not unlike their flagship character, they have become the gold standard in popular film entertainment. The Marvel movies stand above every other franchise, even the Star Wars series, in terms of (mostly) quality films.

Consider that they didn’t have an easy time of it. Due to bankruptcy issues in the 1990’s, Marvel Entertainment Group filed for Chapter 11 bankruptcy. To dig themselves out of their financial hole, Marvel sold the film rights for a number of their most popular characters. 20th Century Fox got the X-Men, Daredevil, and the Fantastic Four. Sony got Ghost Rider. Oh, yeah, they also got Spider-Man.*

That’s a pity because when people think of Marvel, Spidey is still their most popular character. Like Gollum with the One Ring, Marvel Studios President Kevin Feige coveted the film rights to Spider-Man and his integration into the Marvel Cinematic Universe. Whether it was due to savvy deal-making or the blackest of magic, Marvel Studios made a deal with Sony and was able to add Peter Parker, Aunt May, and other surrounding characters into the tapestry of the MCU. The end result is Spider-Man: Homecoming. It’s about time.

We begin with two flashbacks. The first takes place directly after the Battle of New York as seen in The Avengers. Adrian Toomes (Michael Keaton) runs a salvage operation, cleaning up debris and hanging onto funky alien technology. It’s pretty lucrative, at least until they are shut down. Turns out the U.S. Government is taking over in partnership with a self-dealing Tony Stark (Robert Downey Jr.). Toomes is out of a job, and he’s a little pissed about that. Flashback number two brings us to the 15-year-old Peter Parker (Tom Holland), and the superhuman smackdown of Captain America: Civil War. Stark has brought in Peter, who acquits himself nicely as Spider-Man. He holds his own against the good Captain, smacks around the Falcon, and even dumps Giant-Man on his giant butt.

Now Peter is convinced he’s headed for the big time. He thinks he’ll be an Avenger, go on world-saving missions and stand alongside Stark. That’s not the case, and Stark tells Peter to sit tight and wait for instructions. In the meantime, Peter gets to go back to high school as a sophomore, which isn’t easy for him. A few months pass, and Stark’s right-hand man Happy Hogan (Jon Favreau) won’t respond to Peter’s many, many calls and texts. Despite getting a flashy new suit from Stark brimming with accessories and perky artificial intelligence,** Stark gives Peter nothing to do. In the meantime, he stops a few petty thefts, goes to class, pines after his crush Liz (Laura Harrier) and deals with the bullying Flash (Tony Revolori). At least he’s got his pal Ned (Jacob Batalon) to keep him company.

Things heat up when Peter takes on a group of crooks trying to knock over a bank. The weapons they’re packing are serious, a weird mixture of extraterrestrial tech and Stark Industries gear. Like any good American entrepreneur, Adrian Toomes found his niche. He’s spent years transforming himself from a scavenger into an arms dealer, and he’s the man responsible for putting this weaponry on the market. But Toomes also likes to get physical, and he’s designed an armored turbine powered flying suit. Toomes and Peter are on a collision course, and Peter also has to stay on top of his studies and prevent his Aunt May (Marisa Tomei) from getting wind of his amateur crime fighting activities.

If you’re at all interested in Spider-Man: Homecoming, you likely have two questions. First, how does it measure up against the other Spidey flicks? Second, as the 16th movie in the MCU, is an enormous amount of prior movie knowledge necessary to enjoy this flick? I’ll answer the second question first. This film is a street-level view of the MCU, and it occupies a comfortable middle ground between the world-ending exploits of The Avengers and the gritty adventures of Daredevil and Jessica Jones on the Marvel Netflix TV series. Just the right amount of detail has been sprinkled in referencing other films, and it helps to add a sense of color and weight.

As far as the other Spidey films? Homecoming blows both of the Andrew Garfield films out of the water, and with the exception of Spider-Man 2, it’s comfortably better than 2 out of 3 of Tobey Maguire’s turns at bat. Director Jon Watts does an awful lot right here. His action sequences are kinetic and creative, particularly one examining the difficulties of web-swinging in the suburbs. More importantly, this is the first Spidey flick that digs down deep into his high school experience. Watts made a distinct choice to go for a John Hughes kind of vibe, by portraying the humor and heartbreak that comes with being a teenager. Add to that superhuman reflexes and wall-crawling and you’ve got Pretty in Webs. I also really dug the wide diversity on display at Peter’s high school, as opposed to the sea of white folks I saw in the first Spider-Man film.

The script is very strong and really funny. That’s quite frankly shocking, considering it’s credited with six screenwriters. Six. Usually, when that many writers are attached to a script, it’s a dead giveaway that it sucks pretty hard. Not the case here, where we’ve got a wide variety of characters, each with their own desires and arcs. In some cases, the arcs carry over from other films, and watching Tony Stark slowly go from entitled 1%-er to a reluctant (and terrible) mentor is enormously entertaining. Yeah, I know, one of the main complaints of Marvel movies is that they are unrepentant yukfests. When you’re dealing with a character like Spider-Man who’s a natural wiseass, it fits, and the script knows when to tone down on the jokes and play up the heart. As strong as the script is, it fumbles when it comes to the relationship between Peter and Aunt May. Marisa Tomei is a strong performer, and she isn’t given much to do. I think that’s likely to change down the road, though.

At this point, Marvel Studios has gotten casting down to an art form. This film is populated with excellent actors in roles large and small. Michael Keaton might, might be the best villain to appear in the MCU so far. As the Vulture, he’s not out to take over the world or kill the Avengers. He’s a working stiff who wants to provide for his family and just wants a shot at success. If he has to bend, break, or shatter some laws to make it happen, so be it. Jacob Batalon’s Ned is a comedic powerhouse, as is Zendaya as an acidic fellow student. Though, why in God’s name would you cast comic actors like Hannibal Burress and Martin Starr, and give them nothing meaty?

How’s the new kid as Spider-Man? Tom Holland is good. Really damn good. Think of it like this. When Tobey Maguire played the role, his Peter Parker was a dweeb on wheels and a genuinely good-hearted guy. As Spider-Man, he never quite got the recklessness and joke-a-minute quips the character is known for. When Andrew Garfield took over, his Spidey was a natural weisenheimer. His Peter, though, was a little too cool and confident. Holland achieves the perfect balancing act between hero in training and high school sophomore. He wants to help, wants to make a difference so badly. He also has a nasty habit of looking before he leaps, and his quips come from a place of panic. Holland is the definitive Spider-Man, and he’s the best addition to the MCU since Chris Evans’ Captain America.

Spider-Man: Homecoming is designed to be a fast-paced summer blockbuster, and it’s more than just thrills. Like Wonder Woman, this film isn’t ironic when it comes to the importance of sacrifice and doing the right thing. Peter thinks it’s pretty cool that he gets to play the bop the bad guys game. More importantly, he wants to do good because it’s the right thing to do. These days, we can’t get enough of that.

Tim Brennan
Tim has been alarmingly enthusiastic about movies ever since childhood. He grew up in Boulder and, foolishly, left Colorado to study Communications in Washington State. Making matters worse, he moved to Connecticut after meeting his too-good-for-him wife. Drawn by the Rockies and a mild climate, he triumphantly returned and settled down back in Boulder County. He's written numerous screenplays, loves hiking, and embarrassed himself in front of Samuel L. Jackson. True story.
Tagged: jacob batalonjon favreaujon wattslaura harriermarisa tomeimichael keatonrobert downey jrspider-man homecomingtom hollandtony revolori