We need Fred Rogers these days, or someone very much like him. If you’re a younger reader, you can be forgiven for not knowing his work, since he’s more of a contemporary for those of us of a certain age. But his refreshing lack of cynicism is a warm and safe hug, something that effortlessly passes beyond a single generation.

Rogers was the creator and star of Mister Rogers’ Neighborhood, a children’s program that ran for decades on public television. During each half hour episode, there were puppet shows, tours of factories and experiments, and Rogers himself. He would simply and honestly talk directly to the camera, and over the years he spoke of divorce, death, and the power of feelings. It was a lovely show created by a lovely man. I tear up now just thinking about it.

These days, children’s television and film feels radically different. Frequently, the pacing is  lightning-quick and the viewer is bombarded with pop-cultural jokes and references. There’s absolutely a place for that, but there’s also a place for gentleness and emotional honesty, and it sometimes feels as if that kind of thing is lacking.

Only now it isn’t. Madeleine L’Engle wrote her novel A Wrinkle in Time in 1962, and while it won the Newbery Medal and became a classic of children’s literature, it was long considered to be unfilmable. Disney accepted this particular 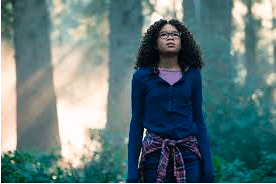 challenge and has teamed with director Ava DuVernay to make a film that doesn’t quite do the novel justice, but does do justice to gentleness.

We’re introduced to Meg Murry (Storm Reid), who’s having kind of a hard time. It’s bad enough that she’s dealing with the Darwinian nightmare of middle school and the taunts of mean girls. Her parents are brilliant scientists, and her father Alex (Chris Pine) has been missing for four years. Did he run off to Mexico? Did he disappear in a puff of magic? Nobody knows.

All Meg knows is that her mother Kate (Gugu Mbatha-Raw) is doing her best to keep the family together, and Meg needs to keep an eye on her preternaturally intelligent little brother Charles Wallace (Deric McCabe). Meg desperately misses her father, and it’s the uncertainty of his disappearance that gnaws at her.

As it turns out, the doctors Murry were researching tesseracts, and they found a way to wrinkle the fabric of space and time. All Alex Murry wanted was to shake hands with the universe, and he got his chance to do precisely that. Unfortunately, nobody knows where in the universe he’s gone. Well…that’s not precisely true. 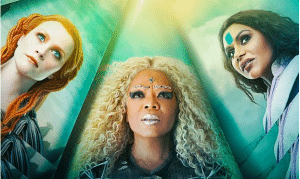 Alex called for help, and his call was heard. The giddy and goofy Mrs. Whatsit (Reese Witherspoon) arrives at the Murry home first. Before long, the kids meet the quotation-spewing Mrs. Who (Mindy Kaling) and the regal Mrs.Which (Oprah Winfrey). The three Mrs. are intergalactic beings of immense power, and they are warriors for good. Along with Meg’s crush Calvin (Levi Miller), Meg and Charles Wallace join the Mrs. on a planet-hopping search for the missing Alex.

Your first question is probably, “Is the movie faithful to the book?” My answer to you is…maybe? Perhaps? I have a shameful confession to make. I have not read the novel A Wrinkle in Time, and even typing that now causes my wife to emit silent waves of scorn in my direction. However, a quick jaunt over to Wikipedia tells me that quite a lot of details are missing from the book. For example, there’s no:

For an adaptation to be successful, it should ideally capture the spirit, if not necessarily all the minutiae. Madeleine L’Engle was the writer-in-residence at New York’s Episcopal Cathedral of St. John the Divine, and numerous themes and concepts of Christianity run through her novel.* In the film, they’re pretty much gone, having been replaced with a gooey universality about the light battling the darkness, believing in yourself, and whatnot.

Look, I’ve had my issues with Christian cinema, like the insultingly smug War Room. The problem with those kinds of films is that it makes faith and belief easy, small, a one-on-one relationship. In reality, faith is mysterious. It has vast power, and along with quantum physics, it was one of the central reasons the novel A Wrinkle in Time endures decades later. Screenwriters Jennifer Lee and Jeff Stockwell have stripped their script of the glorious partnership between the scientific and the divine. That was a catastrophic error.

Luckily, we have Ava DuVernay as a director. She’s made a film exploding with color, and while there’s definitely aspects of psychedelia, it doesn’t have the hard edges of something like Annihilation. Even more so, DuVernay has created a tone that’s extremely earnest. If a Bernie Sanders rally transmogrified into a movie, it would be A Wrinkle in Time. That’s okay, it’s great even! There’s a strong theme running through that validates emotion, and genuine feelings are never shoved off to the side to be replaced by snark. That means that, as much as we have CGI set pieces showcasing flying lettuce and a 20-foot-tall Oprah, the film shows its power when it focuses on pure emotion. 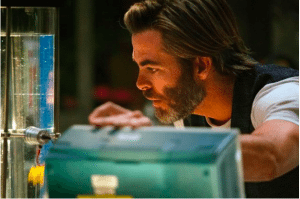 The cast understands that, to the extent that their characters are allowed to have multiple dimensions. Chris Pine hasquietly shown us an impressive range through his career, and he’s able to make masculine vulnerability feel genuine. He’s got nice chemistry with Gugu Mbatha-Raw, and I wish they had more time together. Storm Reid absolutely knocked my socks off as Meg. It can be tough for child actors to sell emotional moments legitimately, but Reid shows us that Meg’s aggression and sullenness is a protective shell, and when that shell finally breaks, it’s a devastating moment.

There’s also a degree of stunt casting at work here. Oprah Winfrey is an actor of considerable power, but as Mrs. Which, she mostly stands around saying wise things. Similarly, Mindy Kaling is a witty and sharp performer. You wouldn’t really know that since her Mrs. Who is a character with the singular characteristic of quoting luminaries like Shakespeare, Buddha, and Lin-Manuel Miranda. I liked Reese Witherspoon’s goofy energy as Mrs. Whatsit, and she has a recurring gag where she’s constantly throwing shade at Meg through comic asides to Charles Wallace. 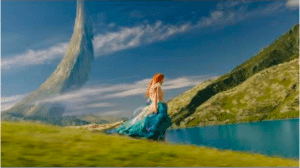 Regardless, I liked A Wrinkle in Time. This film feels just right for children, though very young kiddos might need a little encouragement from grown-ups due to some darker parts. I saw the film with my kid, and he gives it an enthusiastic thumbs-up. I saw a lot of kids walking out of the theater wearing big smiles. That means the film delivered on a cinematic experience that, while too willing to jettison what made Madeleine L’Engle’s book a masterpiece, still has emotion and heart to spare. Fred Rogers just might approve of that.

*It’s worth pointing out that A Wrinkle in Time is one of the most frequently banned books in America. Our good friends at Jerry Falwell Ministries claimed that it undermined the Christian faith, which is a conclusion that could only be reached by aggressively not reading the book.

Tim Brennan
Tim has been alarmingly enthusiastic about movies ever since childhood. He grew up in Boulder and, foolishly, left Colorado to study Communications in Washington State. Making matters worse, he moved to Connecticut after meeting his too-good-for-him wife. Drawn by the Rockies and a mild climate, he triumphantly returned and settled down back in Boulder County. He's written numerous screenplays, loves hiking, and embarrassed himself in front of Samuel L. Jackson. True story.
Tagged: a wrinkle in timeava duvernaychris pinederic mccabejeff stockwelljennifer leelevi millermindy kalingoprah winfreyreese witherspoonstorm reid