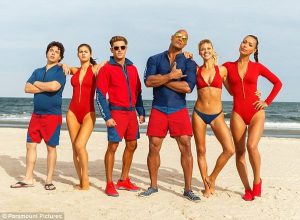 During the one hour, fifty-six-minute running time of Baywatch, a variation of a thought kept running through my head. This thought would burrow to the surface of my cerebral cortex every few minutes, and when it did, it would make me slump in my seat in disappointment.

God, I wish I were watching 21 Jump Street.

This movie is like 21 Jump Street, but dumber, lazier, and it hates trying hard.

You know what I should do this Memorial Day weekend? Get a nice bottle of scotch and watch 21 Jump Street. Great idea, brain!

Made in 2012, 21 Jump Street absolutely shouldn’t work, but it does. Based on the television series, it’s a comedy that’s smart, perceptive, and unafraid of being filthy and weird. More importantly, it dives deep down the meta rabbit hole by commenting on itself and remakes in general. We’re all better off for having this movie be free and in the wild. Not so much the case for Baywatch.

As you’ve no doubt gleaned, the film is based on the 1989 TV series and its numerous spinoffs. We’re introduced to Mitch Buchannon (Dwayne Johnson), the leader of an elite band of lifeguards in the Florida beach town of Emerald Bay. What makes them elite, as opposed to your run of the mill lifeguards, you might well ask? Well, Mitch claims he’s performed 500 rescues, but I think it’s just ego run amok. Anyway, his team thus far consists of his second-in-command Stephanie (Ilfenesh Hadera), and C.J. (Kelly Rohrback), who has a very distinctive habit of running in slow motion.

But there are vacancies on Mitch’s team and wildly popular tryouts are being held. A few of the new recruits are Ronnie (Jon Bass), a doughy goofball with a massive crush on C.J., Summer (Alexandra Daddario), a brunette with an incredibly ill-defined personality, and Matt (Zac Efron), a conceited and disgraced Olympic swimmer. Mitch has been informed by his boss (Rob Huebel) that Matt will be a great asset to the team, mostly for publicity reasons, and Mitch is not thrilled with this. As anyone who is not in a medically-induced coma can predict, Mitch and Matt will butt heads, because Mitch is Tough but Fair, while Matt is a Maverick Who Plays By His Own Rules.

Meanwhile, Mitch is investigating the multiple appearances of drugs on his beach. There may be a connection to slick socialite Victoria Leeds (Priyanka Chopra), and when I say there may be a connection, I mean that there’s the world’s most obvious connection, so much so that it’s like the movie got drunk and started shaking the audience and screaming, “LOOK! SHE’S THE VILLAIN! SHE’S DELICIOUSLY EVIL!” Mitch and his team must stop the wicked Leeds from running drugs. Matt must learn to work as part of a team. I must struggle against the impulse to commit ritual suicide and remove myself from a world in which this film could be a legitimate success.

Look, if you kinda squint a little, you’ll notice something interesting with Baywatch. The elements are there to create a genuinely smart and subversive comedy. Probably every 5-10 minutes, a joke would come along that was just smart enough to be interesting. Every time that happened, I would perk up, thinking to myself, “Cool, now the movie is really going to shift into high gear and bring everything together.” But like Charlie Brown with Lucy and that frickin’ football, I was perpetually doomed to disappointment.

Part of the problem is director Seth Gordon. Look at his filmography, and you’ll see he starts his career promisingly with the entertaining documentary The King of Kong. So far, so good, until he starts making half-assed comedies like Identity Thief and Horrible Bosses. Then he becomes like Rawson Marshall Thurber, director of last year’s lazy Dwayne Johnson comedy Central Intelligence. Gordon seems to be comfortably in the groove of movies that are just good enough. They look fine, there are a few funny bits and some action sequences that are competently staged. But he’s never inspired, and it just feels like he’s churning out product.

Part of the problem is, obviously, the script. 4 writers worked on the story, two of them being Thomas Lennon and Robert Ben Garant. Lennon and Garant are well known for working on the dearly departed The State and writing uninspired screenplays for comedies like Night at the Museum. Along with screenwriters Damian Shannon and Mark Swift, there’s a persistent pattern throughout the script of the jokes feeling like they came from the first draft. Less than half a dozen gags have the inspired lunacy that could make Baywatch stand shoulder to shoulder with beloved comedies like Anchorman or The Hangover. Instead, the script is reliant on a cavalcade, a veritable plethora of dick jokes. If you love dick jokes, you’ll be in heaven with this movie. I should also point out that, of the female lifeguard characters, their traits are perky (C.J.), slightly less perky (Summer), and mostly serious (Stephanie). A massive opportunity for great humor was missed by not including the women’s perspective. I’m not saying there had to be a running theme of girl power here. But how do they feel about being ogled? Do they like it, think it’s funny?

Part of the problem is the cast, mostly Johnson and Efron. Johnson has become one of the biggest stars in the world, for damn good reason. He can do action like nobody’s business, he’s got strong comedic timing, and the guy is a vastly underutilized dramatic actor. If you eyeball his filmography, you’ll see a performer who loves to stay in his comfort zone, and only occasionally tries new things. Johnson doesn’t need to be Robert de Niro, * but he plays variations of The Rock so often, and he continues to do that here. Is he like Harrison Ford, an actor who chooses parts based on keeping his fans happy? Is he like Adam Sandler, a talented guy** who seems to be allergic to taking risks? I can’t say, but I wish Johnson would broaden his range.

The same goes for Zac Efron. High School Musical may have given him his start, but his work in Neighbors showed that inside his ridiculously good-looking exterior is a comic performer who’s willing to get seriously weird. Efron barely gets a chance to flex his funny bone here. Instead, he’s the standard cocky guy who just needs to grow up a little. You can feel him straining against the deeply bland material. One of these days, Efron is going to give a performance that will blow everyone away.*** It just isn’t this one.

At the end of the day, the cast and crew of Baywatch all came together to make something absolutely disposable and utterly forgettable. I’ll be honest, of the crowd I saw it with, they chuckled a fair bit and there were a couple of big laughs. They enjoyed themselves, and I certainly won’t take away the fact that they had a pleasant evening. But they could have walked out of that theater absolutely bowled over, saying to friends, “You will not believe how good Baywatch is! Yes, I’m being serious.” Nobody will ever say that because nobody attached to the film cared enough to push things to the next level.

**I’m not a Sandler fan, but he’s incredible in Punch Drunk Love.

***It might be the upcoming Extremely Wicked, Shockingly Evil and Vile, where Efron is apparently playing Ted Bundy. That casting is kind of brilliant.

Tim Brennan
Tim has been alarmingly enthusiastic about movies ever since childhood. He grew up in Boulder and, foolishly, left Colorado to study Communications in Washington State. Making matters worse, he moved to Connecticut after meeting his too-good-for-him wife. Drawn by the Rockies and a mild climate, he triumphantly returned and settled down back in Boulder County. He's written numerous screenplays, loves hiking, and embarrassed himself in front of Samuel L. Jackson. True story.
Tagged: alexandra daddariobaywatchdwayne johnsonilfenesh haderajon basskelly rohrbachpriyanka chopraseth gordonyahya abdul-mateen IIzac efron