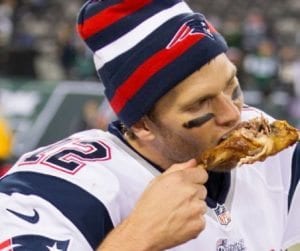 On Sunday, the New England Patriots pulled off an incredible come-from-behind victory over the Atlanta Falcons.  Much has been made of quarterback Tom Brady and his amazing performance as an athlete at what, for most athletes, would be the twilight of their careers.  Love him or hate him at 39, Brady’s performance does not seem to be waning.

Tom Brady has great genes.  He is not yet showing signs of decreased muscle mass and other natural signs of aging. The Boston Globe recently did a story about Tom Brady’s remarkable  biology, citing “maniacal workouts to maintain his VO2 max (the amount of oxygen an athlete can use under all-out exertion), the right DNA and a good dose of good luck, there is likely a combination of factors that have contributed to Brady’ successful late career.”

An article last year on the website Boston.com, Tom Brady’s chef seems to take a little credit for the athlete’s success.   Chef Allen Campbell is the Brady family’s personal chef.  His philosophy of eating, while on its face very healthy, poses some problems in my mind.  According to Campbell, the family consumes about 80% vegetables and whole grains, and the other 20% is lean protein including grass-fed organic steak and wild salmon.  Sounds perfect, right?  Well, there’s more.

Everyone has to find a diet that works for them.  It’s important when weekend warriors and other average Americans consider the manner of eating we are going to pursue, we think about our personal health needs.  When considering a diet, think about the long term sustainability, whether it meets your health needs and what preventive steps you need to take to reduce your risk of  disease.

Andrea Groth
Andrea wants to live in a world where the neighborhoods are walkable, bike lanes are plentiful, and the food is fresh, delicious and readily available. A 20-year veteran of the health and wellness industry, she started her career in the fitness industry while earning a master’s degree in Exercise Science and Health Promotion, and then on to the burgeoning field of worksite wellness. Andrea has competed in collegiate level soccer, worked as a personal trainer, fitness instructor, wellness coach, and master trainer, climbed 14ers, and completed cycling centuries and metric centuries. All of these experiences give her the opportunity to view well-being from many different perspectives. When she’s not helping others to be their healthiest self, you can find her at a farm to table restaurant, down dogging at the yoga studio, or experiencing the Colorado landscape on a bicycle, snowshoes, cross country skis or on foot.
Tagged: About Boulderdietfoodhealth