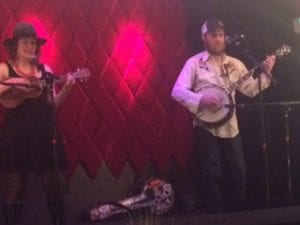 You can glean a lot of information off the walls of a dive bar toilet. I read these with some interest because they often imply curious information about women, of which I am one. For instance, you can read the walls at 3 Kings and learn that Johanna is F–ing Hot. You can take a peek into the potties at Bar Bar and learn that their bartender s–ks d–k. At the Star Bar, by contrast, it’s beneficial to keep one’s nether regions well-aired, which is not information about women specifically, but may be helpful nonetheless. I have no way to verify these statements. But I did get the useful and fact-checked tidbit from a poster in the penny-floored lavatory at the Syntax Physic Opera that the Arts Caravan would be performing there.

The Arts Caravan, an ever-evolving sideshow-with-circus, shows up at the Syntax on last-Thursdays of each month. The Syntax sits farther down Broadway than most of my familiar haunts, about halfway between the densely-placed venues of Lodo and the art district blossoming around Santa Fe and Hampden. It’s conveniently close to a Sam’s Club, though, in case you need a flat of toilet paper along with your eclectic live entertainment. I made plans to attend.

The show was listed for 6:00pm and I rolled in at 6:15 with my mouth still blue from cursing the Denver traffic. I gave my name at the ticket desk and found my way to Zia Pixie, the queen of this gypsy caravan. She informed that while the website says 6:00, the actual event was scheduled for 6:30, with an expected start time of 7:00. Thus, I arrived 15 minutes late just to be 45 minutes early. The restroom poster did not make this schedule clear. But the happy hour specials were nice and so I stood around and drank gin and ate French fries for an hour, which is exactly what my “Eat Better in 2019” resolution is all about. I drank gin and ate spuds and handled the many questions posed to a woman alone at a bar, for which I feel that 45 minutes is more than adequate time. I took my drink and wandered around to look at the antique porn on the walls and wondered if it was really antique or if it had been made to look that way with vintage techniques. Either way, it’s pretty.

The second in the Arts Caravan cast to get acquainted with me was Griffin, the resident gentleman, in the style of Colonel Sanders, but with less chicken and just as much charm. He introduced himself as the host of the evening and kissed my hand, which rarely happens to women alone in bar and felt a bit like a throwback to the time of the vintage nudie pics.

The show began promptly at 7:00, with “Griff” calling us to order and introducing the acts, which ranged from dance to poetry to fire play and sideshow. The opening act was a guitar-playing duo covering some pop tunes melodically and pleasantly. The show then moved on to Zia Pixie doing a fire act, which was quite enjoyable. I do a small bit of fire performance myself and it’s both harder and easier than it seems. She presented the tricks and fire transfers with panache and showmanship, all to the soundtrack of a song with the refrain “I’m your nickelodeon,” which confused the hell out of me. In my Millennial mind, “Nickelodeon” is a television station that shows cartoons in the morning and Bob Newhart reruns at night. Griffin repeated this term several times and I sneaked my phone out to Google it. Turns out, “nickelodeon” is a term for a jukebox or a 5-cent admission theater. Context implies “accessible entertainment,” which worked well for a reference to Arts Caravan.

The show progressively got weirder as it moved away from coffee shop-type guitars and into sideshow material, including Slim the Living Cyborg. I’ve met Slim many times backstage and he once told me that the best way to practice sword-swallowing is by practicing with glow sticks, “like a hooker.” I do not intend to verify this statement. If fact checked, it may be useful to someone, woman or otherwise. Anyway.

Slim’s schtick is modifying his body (the “living cyborg” thing) and the doing strange things with the remainder of it. This includes hanging chains of heavy objects from his pierced septum and pierced nipples and doing the classic “blockhead” trick, which is done by inserting stiff objects into one’s nasal passages. And, of course, sword swallowing, no glow sticks in sight. It’s curious stuff. Some circus tricks are illusions, of course, but some are just real. Hanging things from your nipples is exactly what it looks like; it’s a skill, not an illusion. Slim’s top trick is stapling things to himself–preferably money, and preferably high-denomination bills. You can staple your money to his body yourself; the higher the denomination, the more sensitive the area to be stapled. This usually includes “cheeks, both kinds, and taint,” but I think the venue restrictions might limit that. Nobody offered a high enough bill to see how that last offer would have played out anyway, although I’m sure it would, at the very least, be curious to watch because stapling is another thing that is not an illusion.

Another artist, Cybill, performed a spoken-word piece with some sexy lingerie and a rose. The petals came off the rose in a quite impressive fallout. I’d watch that again. She returned later to do a pretty bool belly dance with impressive abs. I’d watch that again, too. I don’t care who you are, looking at pretty ladies is a nice way to pass your evening (see: vintage nudie pics); so much the better when they do skilled performances, too. I’d like to get up on my feminist high horse about valuing women for what they do (as we totally should), but I’d be lying if I said that we’re not nice to look at. Both things can be true, and that’s not an illusion either.

After the show, I declined a drink from a guy and headed home, forgetting my credit card at the bar. Circus is a fun break from reality. I highly recommend that all of us take a deep draught of that drink every now and again. Your next chance to see the friendly and curious folks of the Arts Caravan happens on February 28! Should be a nice chance to warm up and jam out with a charming group of people who happen to be both illusory and real. This is a verified fact.

Jessie Hanson
Jessie Hanson lives and works in Denver and couldn't be happier about it. Like the best-possible kind of Jekyl-and-Hyde scenario, she splits her life between science and storytelling. During the day, she performs clinical diagnostics and messes around with test tubes. At night, she performs behind the mic as a standup comedienne, in the air as a circus aerialist, and in rhinestones as burlesque dancer. She begrudges the hyper-inflated cost of a decent pair of false eyelashes. When she's not on stage, she sweating it out as an endurance athlete in triathlons and marathons across the West. She begrudges the hyper-inflated cost of a decent pair of running shoes. She's thrilled to be on board with OnDenver and writing about science, comedy, circus, athletics, and general fun on the Front Range!
Tagged: Circusnightlifeperforming artssideshow