Another Day of Sun 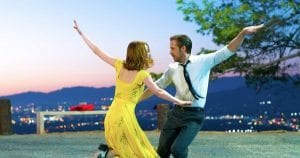 I’ve always held musicals at arm’s length. I’m weak that way. Everybody has a blind spot when it comes to movies, a certain genre or actor that they just can’t stand. My wife’s aunt has an irrational hatred of Tom Hanks. Every time she sees him in a movie, she shakes her head and says something like, “Nobody is that nice. I bet he’s really a serial killer.”

For years, that’s how I was with musicals. I can suspend disbelief when it comes to subterranean creatures menacing a group of spelunkers, or a sociopath dressing up as a bat and committing grievous bodily harm to work out his issues. But the idea of emotions being felt so strongly that they can only be expressed through song? Feh. Then I saw Singin’ in the Rain, and I got it. It wasn’t just joyous, it was confidently emotional. That particular musical was the key.

Can you blame me, though? I’m repressed, which is a concept we Americans are extremely comfortable with. We’re taught as children to bottle up our emotions, and only let them out during socially acceptable occasions. You can’t cry when you see a gorgeous sunset, but you can cry if the Broncos go all the way to the Super Bowl and manage not to choke. No wonder we’re dropping from stress-related heart attacks left and right. That’s why we need to open up. It’s good to open up. Movies like La La Land don’t have time for repression since they positively explode with emotion, a point of view, life itself.

Let’s be clear about something. This isn’t an ironic, snarky, commenting upon itself kind of musical. It doesn’t have time for that. The film roars to life with “Another Day of Sun,” a huge ensemble piece. Drivers are sitting in one of the notorious traffic jams Los Angeles is famous for. A woman starts singing. She gets out of her car. Dances. A man joins her. Soon, there are positively throngs of people dancing in the streets and atop their cars, all of them singing about how each new day brings hope and another chance for success.

Stuck in this traffic is Mia (Emma Stone). She’s an aspiring actor who works as a barista on the Warner Brothers lot. She sits, rehearsing lines in her Prius, not paying attention to the traffic moving ahead of her. Behind her is Sebastian (Ryan Gosling). He’s a jazz-obsessed piano player who is forced to plink out Christmas carols in a bland L.A. restaurant. Sebastian lays on the horn of his classic car and speeds past her, stopping only to give her a dirty look. She throws him the bird in return. While this is the first Meet Cute they have, it won’t be the last.

One one level, this is a fairly conventional musical. Mia and Sebastian have a couple of false starts and give each other a hard time. Yet we are wise filmgoers, and we know where this is going. After Sebastian has been fired from his job for jazz-freestyling, he lands another gig in a lame 80’s cover band. The band is playing at a party in the Hollywood Hills. Mia is there, dragged along by her roommates in hopes of networking. Mia and Sebastian see each other and decide to take a quiet walk together. They talk. Mia opens up about her frustrations, about useless auditions where producers text and don’t even bother with eye contact. All she wants is a decent chance. Sebastian opens up about his frustrations, about his love of pure jazz and his desire to open a nightclub instead of becoming a hacky lounge musician.

It’s there, overlooking the hills, that they begin to fall in love. Even though they sing about how the gorgeous view is wasted since neither of them is with their real partners, they tell us the truth of their feelings through dance. It’s an amazing sequence, shot in long takes so that we can see all of their moves. There is no digital trickery here, just a couple of actors performing at the top of their game. From there, we see them juggle their love affair and the pursuit of their dreams.

La La Land is the best kind of movie; a labor of love. Just like Martin Scorsese or Quentin Tarantino, writer/director Damien Chazelle is compelled to tell stories through a certain kind of lens. However, while many of Scorsese’s films are reflected through the prism of his Catholic faith, or Tarantino’s through pop culture, Chazelle approaches his stories through music. He’s interested in how we relate to music, how we use it to earn a living, and how we define ourselves by it. His script for Grand Piano, which concerns a neurotic concert pianist being menaced by a sniper, uses the constant playing of music to ratchet up the tension. 2014’s Whiplash, which he wrote and directed, was a brutal coming-of-age tale about the pursuit of excellence in performance, no matter what it costs.

Here, Chazelle goes a bit lighter, but don’t confuse lightness with shallowness. I can’t deny that I did have a big, stupid grin on my face through most of the film. But first and foremost, Chazelle knows that character is key to story, even more so than plot.* He gets what drives Mia and Sebastian, their optimism that they will eventually make it, but he knows how easily things can go off-track. Chazelle uses every tool possible to put us into their heads, and we’re blessed with a riot of colors and song and dance numbers that are alternately joyful and somber. We never feel like he’s showing off, or directly aping other musicals like Singin’ in the Rain or The Umbrellas of Cherbourg, even though he clearly loves them.

He also has a couple of honest-to-God movie stars in the house. We don’t have too many movie stars anymore, especially not in the mold of Fred Astaire and Ginger Rogers. Back in the day, stars like Rogers and Astaire could command a screen, compel you to watch, and you’d be thankful for it. Stone and Gosling don’t have Astaire’s almost inhuman athletic ability, but they do have charisma and chemistry to burn. Gosling is slick and charming, while Stone is gorgeous and sharp. As singers and dancers, both of them are pretty solid, but it’s their commitment to character that makes the emotion feel genuine. Emma Stone, in particular, is spectacular. This is career best work for her. We also have a brief appearance by the mighty J.K. Simmons as Sebastian’s boss and John Legend as a likable band leader.

In a lot of ways, 2016 has been a dreadful year. We’ve just gone through one of the most vicious election seasons in modern memory, and at a time when we should all be coming together, we feel dangerously far apart. By the time you read this, it will be Christmas Day, a day where a little hope and a little magic should be celebrated. Do yourself a favor and catch La La Land. It’s a necessary reminder that romance, triumph, and hope don’t just exist in the movies.

*I’m looking at you, Rogue One.

Tim Brennan
Tim has been alarmingly enthusiastic about movies ever since childhood. He grew up in Boulder and, foolishly, left Colorado to study Communications in Washington State. Making matters worse, he moved to Connecticut after meeting his too-good-for-him wife. Drawn by the Rockies and a mild climate, he triumphantly returned and settled down back in Boulder County. He's written numerous screenplays, loves hiking, and embarrassed himself in front of Samuel L. Jackson. True story.
Tagged: damien chazelleemma stonej.k. simmonsjohn legendla la landryan gosling