Diana Khoi Nguyen’s debut collection Ghost Of won the Omnidawn Open Book Contest and has been nominated for the National Book Award in poetry.

Diana and I met during a poetry workshop she taught at Lighthouse in Denver. After eight cozy, creative weeks in the Lighthouse parlor room were through, my view of poetics and aesthetics had shifted drastically. When Diana told us her work was due to release the following month, I pre-ordered the collection without a blink’s hesitation.

Ghost Of  is Diana Khoi Nguyen’s remarkable debut; this work is an extensive, jarring rumination on the loss by suicide of her younger brother—the ghost and principal muse of the work. Nguyen’s voice is augmented by family photographs combined with innovative form to give a  deconstructed dimensionality to these lamentations. The result is nothing short of ingenious and sincere vulnerability, a portal into deeply personal histories.

Diana was gracious enough to allow me to ask a few questions about her creative process and final work. 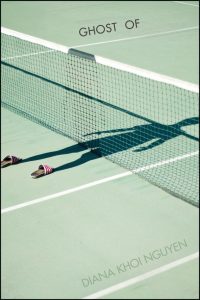 1. Grief can almost be described as the setting of Ghost Of. How would you say the geography of grief is formed and excavated in your work?

It most definitely is the environment of Ghost Of. It makes sense, right? For a ghost to live in a diorama of grief. In particular, the terrain of grief is composed of the familial and (inter)national trauma-landscapes: Los Angeles, Saigon, the jungles of Vietnam which hide violent actions, the Southern California sun which blazes above everything. I am a product of those two homelands (my birthplace, and my parents’ birthplace). No matter where I move to, or visit, or live—my native emotional geography is the mix of those trauma-landscapes.
Until my brother died, I didn’t realize that there was anything to be excavated in that geography. Even before I entered into grief over his death, I had been living in the grief of my past and my parents’ past. Oliver’s suicide was a light switch flicked off—and I needed to turn the switch back on to see what was really there: the funereal present, yes, but also the war-haunted past.

Your brother cut himself from family photos before committing suicide. When and how did you come to the decision to incorporate these in Ghost Of?

These were family portraits which hung in the main hallway of our childhood home. My brother didn’t cut his image out of the photos out of anger, he carefully sliced his portion out of the portrait then slipped the photos back into the frames, where they hung on the walls for years. They foreshadowed his death, and after his death, the missing shards in the frames wounded me deeply. I avoided walking down that hall, I avoided returning to the house.
On the second anniversary of this death, I realized I need to face these voids (the space left behind in the photographs). 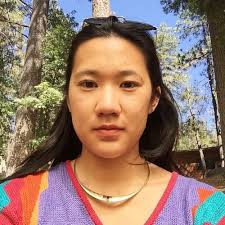 I scanned the photos and zoomed in as much as my computer would allow. I missed my brother. I wanted to be with him, to hold his hand. So I began to talk to him—via words on the screen—in the space he left behind. I began to fill his void in, and then to surround his void—that my words could serve as the family in the photo—his family.

Working with the archive (my brother’s cut-out photos) was natural in the sense that to take on that form in poetry was inevitable—the words poured out of me and into his absence. And this writing process was also the most difficult: I felt grief finally torrentially pour out of me in a flood. I was overcome, lost, terrified in the deluge. I feared that I might drown in it all.
Prior to that moment, I had kept grief at bay, moving stoically (but damaged) through my everyday activities, responsibilities.

How would you describe yourself as a writer?  Have any poets particularly inspired and/or influenced your writing?

I would describe myself as a writer who hates writing, but is physically and psychically compelled to write. Which is another way of saying: I write because I don’t have a choice. I can’t not write.
There are so many poets and writers who inspire and influence me—seasonally, annually: Lucie Brock-Broido, Cal Bedient, Yoko Tawada, Eliot Weinberger, Clarice Lispector, CD Wright, Harold Pinter, Carson McCullers, Mark Levine, Jorie Graham, and so, so many more.

I write in intense poem-marathons: 15 poems in 15 consecutive days, once in summer, once in winter. Ghost Of was written in 30 days in 2016 (August and December). I’ve been working in these intense intervals for years—intervals during which I don’t see anyone, go anywhere. Periods in which I immerse myself in stacks of books and Criterion Collection films, art collections—a kind of solitary confinement with art.

And now, a look inside Ghost Of:

One evening, a man and a woman, parents to two daughters, watch Oliver Twist (1948), go to sleep, and in the morning, name their only son Oliver. The family rejoices (even though they are industrious refugees who previously celebrated nothing) and for several years buy him gifts, feed him fat.

The eldest daughter resembles her brother until she wakes up one morning from a dream in which he lay in ermine, holding tightly to a scepter.

If one has no brother, then one used to have a brother.

There is, you see, no shortage of gain and loss.

Let’s admit without embellishment what we do with each other. When the daughter begins to walk, it is apparent that she ambles pigeon-toed. A doctor tells her alarmed parents that no surgery is needed, just some rollerskating. Each day after work, the father helps his daughter stay upright on her skates.

If you have a father, then you also have a son.

A child has difficulty weaning from nursing bottle to glass of milk. Concise in her expression of impatience, the mother pours a gallon of milk over the girl’s head.

A tiger came across a donkey and having never seen a donkey before, mistook it for a god.

After everyone has gone to bed, an eldest child hoists her younger brother over her shoulders, then a sheet over his shoulders, and they sway as one into the middle sister’s room.

Who is weak and who is weaker and what does relativity have to do with it?

Let me tell you a story about refugees. A mother and her dead son sit in the back seat of his car. It’s intact, in their garage, and he is buckled in; she brushes the hair behind his ear. This is the old country and this is the new country and the air in the car is the checkpoint between them.

Let me tell you a story about seat belts. While driving her children to the local pool, a mother enumerates to her children their failures. There was a mother, she says, who put her children in a car, sewing their seat belts so they couldn’t unbuckle them, who drove them off a seaside cliff.

A boy on a unicycle goes round and round a lighthouse, dodging tourists, ridicule, and awe. He doesn’t go up, he doesn’t fall down.

Son, says the mother, meaning child not her husband. Son, says the father, whose name is Son. Sister, says the son, lying in a coffin. To hell with family, says the rest of the family.

A brother is a brother when he has at least one sibling. The brother believes he is not a brother but one in name only.

When the brother meets a couple his parents’ age, he takes the time to tell them he’s an only child and an orphan. The three of them agree that one must not be without family, that there must be at least two in a family, that three is even better. They embrace and the couple encourages the brother, the brother waiting for the other shoe to drop. Whose shoe? His or the couple’s?

Five pairs of shoes dangle from the pole of a traffic light. Over time, birds make a nest in each hollow, each separate space.

Put yourself in someone else’s bird nest.

“Are you from Japan?” asks a Moroccan shopkeeper in Marseille.

You cannot connect if you keep answering no.

You cannot keep your brother alive if you keep your mouth shut.

You cannot keep your brother alive.

At camp, some counselors take the kids on an excursion into the woods, leading them in a game of hide-and-seek. One boy, a deaf child who was also going blind, hid so well that they couldn’t find him and he didn’t find his way back. He had done everything right—

Is the lost brother happy?

A man lies in an open grave after a body is taken out of it. This practice is said to lengthen life expectancy. The brother imagines his bed is a nest in which his body is removed.

There’s a story about a man galloping by another man who asks, “Where are you going?” “Ask my hearse,” says the man.

“I was never lost in the jungle,” says a father, “just looking for a way out.”

Purchase your copy of Ghost Of here.

Bianca Glinskas
Bianca Glinskas hails from sunny Southern California, where she studied English and Creative Writing at California State University of Long Beach.  Bianca's work has appeared in literary magazines including Knock Your Socks Off, Ordinary Madness, and Glass Mountain Magazine. Bianca's column arose as a natural attempt to answer the call of Denver's lively, pulsating literary scene. When she isn't reading or writing, Bianca enjoys doing yoga, playing viola, exploring the outdoors, drinking at breweries, and holing up in coffee shops for hours on end. For any inquiries regarding Bianca's coverage of Denver's literary scene, please do not hesitate to contact her directly at bglinskas@gmail.com.
Tagged: coloradopoetsDenverDenverliterarysceneDianaKhoiNguyenDianaNguyenGhostOflocalpoetOnDenverpoetpoetrypoetryaboutgriefpoetryaboutlosspoetrydebut