A Horror Movie About Racism? Take My Money! 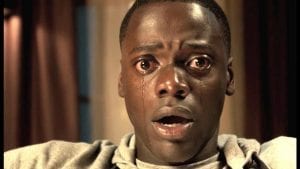 Let’s take a moment to imagine something.

You’re in a social gathering, and you’re immediately aware that most of the other people there are nothing like you. They think they know you, yet they frequently jump to conclusions about you based on grotesque stereotypes. They make comments that are, at best, inappropriate. At worst, their comments are ignorant and hurtful. Does everyone feel that way, honestly? Sure, there might be a few folks there that aren’t a problem, but how can you be sure? Guess what, more bad news! Due to social niceties, you can’t just leave. You have to find a way to adapt, to make it through.

Just about every human being has found themselves in a situation like this. Somebody eyeballs you and makes a set of assumptions without taking the time to, I don’t know, maybe get to know you as a person. It can be tough for everybody. But if you’re one of the 45.7 million people in America that are African-American, the above paragraph is a part of your life.*

When you turn on the TV or go online, you have to wade through idiocy geared towards you made by people who don’t understand you. You’ve almost certainly been in a situation where you’re The Black Guy or The Black Lady, and positively or negatively, you’re now a representative of every other black person who has ever lived. That’s a feeling that most white people simply can’t understand unless they direct a hell of a lot of empathy towards sussing it out. But what if it were worse? A lot worse? Jordan Peele has turned his considerable creativity and intelligence towards this concept, and he’s given us Get Out, a new classic of horror.

The film begins with a young black man (Keith Stanfield) walking down the street in an upscale neighborhood. It’s night, he’s lost and alone, and he’s not happy about how confusing the street names are. A car passes him, swings around, and starts following him slowly.** He sizes up the situation and quickly turns to go the opposite direction. But the car has stopped. It’s empty. An assailant comes out of nowhere and knocks the young man out, then bundles him into the trunk of the car.

We’re then introduced to Chris (Daniel Kaluuya) a photographer living in the city. He’s black, and his girlfriend Rose (Allison Williams) is white. They are preparing to meet Rose’s parents and stay at their home for the weekend. Do her folks know that her black boyfriend is black? Rose doesn’t think it’s a big deal, but Chris isn’t getting good vibes from the situation. He loves her, so he’ll give it a shot. His TSA agent friend Rod (the hilarious Lil Rel Howery), warns Chris to be careful.

Off they go to the Armitage home, a secluded lake house in the middle of nowhere. Initially, things are okay, if a little weird. Rose’s dad Dean (Bradley Whitford) immediately shows off souvenirs picked up during his travels, and he mentions, out of nowhere, that he would have voted for Obama a third time if he could. Her mother Missy (Catherine Keener) might not be quite as much of a try-hard as Dean, but she’s friendly and accommodating. Hovering around the edges are Georgina (Betty Gabriel) and Walter (Marcus Henderson), the home’s housekeeper and groundskeeper. They seem a little…off.

Chris is a good guy, and he tries to be understanding of their strange behavior. Maybe Walter has a crush on Rose. Maybe Georgina doesn’t like the fact that Chris is seeing a white woman. Maybe Rose’s weird brother Jeremy (Caleb Landry Jones) is just protective of his sis. Maybe Dean and Missy are just a couple of well-meaning liberals who aren’t quite as woke as they think they are. However, when Chris heads outside to have a late-night smoke, things start to get weird. Really weird.

From there, I wouldn’t dream of spoiling it. If you’ve seen previews, too much has already been revealed. The best way to enjoy the many pleasures of Get Out is to go in cold. Having said that, I don’t think this will be a movie that falls apart upon repeat viewings. A lot of people are going to respond to it and return to it. That’s partially due to the fact that this is not your standard issue jump-scare fright flick. The first half is a terrific slow burn, where we see numerous moments that could either be racial tension or indicators that something is seriously wrong.

I’m absolutely gobsmacked by the fact that this is Jordan Peele’s first feature film, and he demonstrates filmmaking skill that is frankly astonishing. I get where it comes from, since Peele was a cast member on MADtv, and was the co-creator of Comedy Central’s groundbreaking series Key & Peele. Watch virtually any Key & Peele sketch, and you’ll see a deep perception of pop culture, strong intelligence, and a sharp understanding of social situations, particularly when racial elements are introduced. Plus, good comedy is all about timing, knowing when to let a situation simmer or explode. Turns out horror utilizes exactly the same skill set. Peele knows precisely when to jack up the tension, and when to take a breath for some humor.

Better yet, Peele the screenwriter nicely compliments Peele the director. His characters are three-dimensional for the most part, and even when sinister stuff starts happening, his villains are never evil for evil’s sake. His script does a good job of putting us into Chris’ headspace so that everyone can understand where his perspective is coming from. We can feel his discomfort with being surrounded by a horde of white people, and we can understand why he feels that way.

His cast absolutely understands what kind of movie they’re making. Catherine Keener and Bradley Whitford are always good, but there’s something really appealing when they get to play a potentially malevolent edge. They understand how those possibly unintentional microaggressions can work, and they absolutely lean into them. As Rose, Allison Williams is riffing a bit on her character from Girls, and she’s appealing and interesting. Daniel Kaluuya is the foundation the entire movie is built upon. He needs to be charming, suspicious, baffled, romantic, and terrified, and he needs to do it all effortlessly. Kaluuya does, and he makes it look easy.

Get Out isn’t a great film because of its excellent pacing, strongly defined characters, and mastery of tone. It’s a great film because it never loses sight of its concept. Peele understands that, when a black man meets his white girlfriend’s parents for the first time, there’s going to be a lot of unease. He’s taking that uncertainty and fear of things going off the rails and dialing it up to eleven. It’s pretty uncommon to see a film with a concept that’s this gutsy, and even more uncommon that it’s executed so confidently. Do yourself a favor and go see this movie.

*Really, if you’re anybody who isn’t a straight white dude, that paragraph is a part of your life.

**Nothing good ever came from being followed ominously by a car in the middle of the night. It’s not like the driver is going to jump out and exclaim, “Surprise, here’s some cake!”

Tim Brennan
Tim has been alarmingly enthusiastic about movies ever since childhood. He grew up in Boulder and, foolishly, left Colorado to study Communications in Washington State. Making matters worse, he moved to Connecticut after meeting his too-good-for-him wife. Drawn by the Rockies and a mild climate, he triumphantly returned and settled down back in Boulder County. He's written numerous screenplays, loves hiking, and embarrassed himself in front of Samuel L. Jackson. True story.
Tagged: allison williamsbetty gabrielbradley whitfordcatherine keenerdaniel kaluuyaget outjordan peelekeith stanfieldlil rey howerymarcus henderson