A Group of Remarkable People

When it comes to cinema, we’re living in an age of marvels. Take the long view for a moment, and consider that with theatrical releases and streaming platforms, we have access to a wider and deeper selection of films than at any point in human history. You can immerse yourself in independent films, catch up on old classics, watch virtually whatever you want whenever you want. To say that there are no good movies anymore is wildly inaccurate, you just have to work a little to find them.

That concept also means that, increasingly, the theatrical experience is reserved for blockbusters. You know what? That’s okay! Figure that the average movie screen is 30-90 feet wide and 10-30 feet tall. To settle into your seat and watch a story of commensurate size unspool in front of you is, I suspect, not dissimilar to Neanderthals huddled in front of a cave painting, or the faithful during the Middle Ages hearing a sermon within a soaring cathedral. It’s a moment that’s almost holy.*

However, we incorrectly think that big equals dumb. Blockbusters such as…oh, I don’t know…the Transformers movies are dumb as toast, but assuming all blockbusters are idiotic is like assuming all beer is Budweiser. You need to be willing to approach the question of quality with nuance. When it comes to quality filmmaking on a grand scale, the only real game in town is Marvel Studios.

But, wait, away put your weapon! Before you bombard me with your “What about Star Wars/James Bond/Pokemon” examples, keep this in mind. Ten years ago, Iron Man was released. Since then, there have been a total of 19 films in the Marvel Cinematic Universe. There’s some rough sledding at times,** but watch how Marvel Studios learns from their mistakes. Each film is a little better, tries something a little different, and all of them have narrative connective tissue. No other franchise can accurately make the claim that they’re essentially creating a cinematic novel. The 19th film, or chapter if you like, is Avengers: Infinity War, and it’s the platonic ideal of what blockbuster cinema should be. 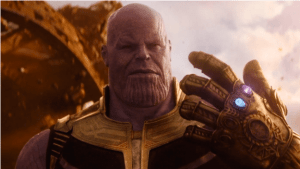 So who’s the hero? That word doesn’t really apply here. Instead, let’s say protagonist, the person who drives the story forward. Here, that’s Thanos (Josh Brolin). He’s a titan from the planet…ah…Titan, and he’s on a quest to find the Infinity Stones. These six stones represent a particular aspect of the universe, and they have control over space, reality, power, mind, soul, and time.

The Mad Titan wears the Infinity Gauntlet, a big-ass glove that doesn’t just look like he’s seriously overcompensating. When he pops an Infinity Stone into the Gauntlet, he gains power. Thanos’ endgame is a ruthlessly simple one. He believes the resources of the universe are finite and there are simply too many beings for it to be sustainable. If he wipes out half of all life, the remaining half can live in comfort and prosperity.

That’s the bad news. The worse news is one of the Infinity Stones is embedded in the head of the synthezoid Avenger Vision (Paul Bettany), and another is within the amulet of sorcerer supreme Doctor Strange (Benedict Cumberbatch).

Thanos and his peeps do not arrive and ask nicely for the Infinity Stones. Instead, like a galactic frat party, they immediately start wrecking stuff. 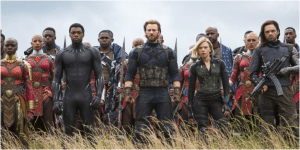 That paragraph above is by no means a complete list of the heroes, villains, and supporting characters in Avengers: Infinity War. What we have here is a movie that’s gigantic in scope. We’ll visit numerous countries, planets, and realities with multiple intertwining storylines. There’s grand ambition on display, and more than a few critics have remarked that the amount of spinning plates is miraculous.

Only it isn’t, though it is highly impressive. Consider that directors Joe and Anthony Russo began their careers in television, and they worked on Community and Arrested Development, both shows with large and distinct ensembles. From there the Russos made Captain America: The Winter Soldier and Captain America: Civil War. The scale and the stakes grow, but it’s all based on the Russos ability to effectively manage a large cast. They know that the main reason we keep showing up to these movies is to hang out with the characters and watch them ricochet off one another.

Add to that the strong visual direction from the Russos. As we bounce between the Guardians of the Galaxy, Doctor Strange, Black Panther, and others, the Russos subtly adjust the film so that it feels like the solo movies of each character, before gradually creating something unique. For a movie that clocks in at a bladder-punishing two hours and forty minutes, the pacing never feels that long. Action scenes are zippy and clear, but the Russos make sure to take time for character development, humor, and tragedy. The stakes are huge, but the tone never veers off into grimdark territory like the unfortunate Batman v. Superman: Dawn of Justice.

This is the fourth film in the MCU written by Stephen McFeely and Christopher Markus, and we’re luckier for it. Markus and McFeely know the characters, old and new, and they don’t just innately understand individual motivations. They get that tension and humor come from different (and sometimes bizarre) character combinations. The instant 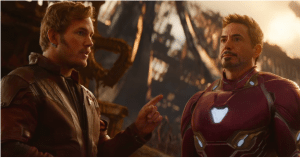 antagonism between Tony Stark and Stephen Strange, or the weird camaraderie between Rocket and Thor keeps things fun, but like any strong comic book, Markus and McFeely balance continuity and character growth effectively.

Remember the old days of superhero movies where actors generally wouldn’t take the roles seriously, and would wink at the audience? That’s not even close to the case here. Every actor is giving it their all, from the recurring PTSD of Tony Stark to his hero worship by Peter Parker to the desperate desire for normalcy of Vision and Scarlet Witch. We have a group of strong personalities that fit together just so.

That’s why the villain of this particular piece needs to be strong enough not to be overwhelmed. Marvel has had a villain problem in the past, and in recent years that problem seems to have been solved. As Thanos, Josh Brolin isn’t a cackling lunatic glorying in destruction. He’s quieter, more thoughtful and vulnerable, and despite being a rotten father and a mass murderer, the Mad Titan is all too human.

Based on this semi-fawning review, is it correct that I hold Avengers: Infinity War up as the best film in the MCU? To quote a close friend of mine, “Yes…but no.” This is an excellent film with a definitive beginning, middle, and end, but it’s also part of a far longer narrative. Infinity War is the Empire Strikes Back of the MCU, and we’re wise to give it time and see how it fits in with the fourth Avengers film out next year. But I can only be honest with you. Based on what I’ve seen and how it ties in with the preceding films? There’s one way I can put it that expresses how this movie made me feel.

*I caught Chappaquiddick theatrically. It’s a solid film grappling with ethics and politics, and it also largely features guys in suits talking in rooms. Does it demand to be seen theatrically? No, but movies like that should be supported. That’s a thorny dilemma to discuss another time, though.

Tim Brennan
Tim has been alarmingly enthusiastic about movies ever since childhood. He grew up in Boulder and, foolishly, left Colorado to study Communications in Washington State. Making matters worse, he moved to Connecticut after meeting his too-good-for-him wife. Drawn by the Rockies and a mild climate, he triumphantly returned and settled down back in Boulder County. He's written numerous screenplays, loves hiking, and embarrassed himself in front of Samuel L. Jackson. True story.
Tagged: anthony russoavengers: infinity warchris hemsworthchris prattchristopher markusjoe russojosh brolinrobert downey jrstephen mcfeelyzoe saldana