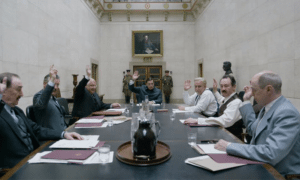 I’m writing this on Saturday, March 24. A day earlier, President Donald Trump signed a $1.3 trillion spending package into law. He almost didn’t sign it, and as usual, a bunch of drama started with a tweet. After serious negotiations between Republicans and Democrats to avoid the third government shutdown this year, an omnibus spending bill was cobbled together. Nobody was entirely happy with it, which means it was a fair piece of legislation.

The President was ready to sign it…until he wasn’t. He tweeted that he was considering a veto, which would have caused another shutdown. For roughly four hours, aides, administration officials, and congressional leaders pleaded with him to just sign the damn thing. He reluctantly did, but only after letting everyone know how much he hated it, and calling for a line-item veto, which would give him the ability to remove provisions of a bill without vetoing the entire bill.*

It’s fair to say that, regardless of political beliefs, a majority of Americans have come to view the Trump Administration as an astonishing combination of greed, incompetence, and arrogance. People from all walks of American life are routinely astounded by a mercurial and proudly ignorant chief executive served by a staff of treacherous lickspittles. We say we’ve never seen anything like it.

Only we have. On March 1 of 1953, Soviet leader Joseph Stalin was struck down by a cerebral hemorrhage. He died on March 5, and according to his daughter Svetlana, his passing was “difficult and terrible.” The ensuing power vacuum caused a scramble for control. Plots were hatched, deals were struck, assassinations took place. It was a nightmare for the nation of Russia, and director Armando Iannucci has made The Death of Stalin, a shocking comedy about those events. 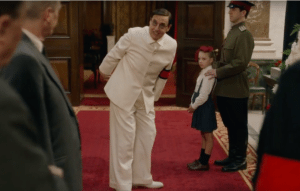 We begin with a catastrophe. Radio Moscow broadcasts a Mozart recital, featuring pianist Maria Yudina (Olga Kurylenko). Stalin enjoys it, and orders that a recording be brought to his dacha. Problem is, nobody was recording the recital. Comrade Andreyev (Paddy Considine) knows a simple “my bad” won’t cut it. He goes to mad lengths to restage the entire recital, and it involves bribing Maria Yudina, forcing passersby to come in to replicate the hall’s acoustics, and summoning another conductor since the original passed out due to fear of being shot.

In a moment of high patriotism, Maria Yudina slips a viciously condemnatory note to Stalin into the sleeve of the recording. Stalin reads it, laughs uproariously, then collapses. The first to discover him is Beria (Simon Russell Beale), the ruthless head of the secret police. Stalin’s nervous and incompetent deputy Georgy Malenkov (Jeffrey Tambor) arrives in a panic. Hoping to use him as a puppet, Beria soothingly offers instructions. Soon after, Party Head Nikita Khrushchev (Steve Buscemi) shows up with the rest of the Central Committee, and from there the backstabbing begins.

Like a stressed-out Denny’s manager, Khrushchev tries to manage a bad situation. He’s got Beria planning a massive and bloody purge while butting heads with Zhukov (Jason Isaacs), the head of the Red Army Zhukov. He needs the support of true-believer Foreign Minister Molotov (Michael Palin), who was just added to Stalin’s enemies list. He also has to handle Stalin’s wildly unstable son Vasily (Rupert Friend) and strong-willed daughter Svetlana (Andrea Riseborough). There’s a massive state funeral to plan, mass murder, rape, treason, jockeying for power, and more. Did I mention this is a comedy? 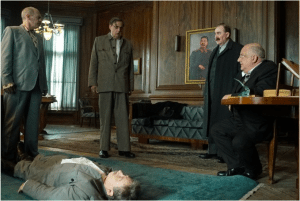 There are a couple of things we need to consider about The Death of Stalin before we go any further. Is the film historically accurate? Well, kind of, but it doesn’t have anywhere near the fidelity to actual events as a film like the excellent Downfall, about Hitler’s last days. Speaking of genocidal maniacs, is it appropriate to make a comedy about these events? The Russian government didn’t think so, and banned the film from being shown this January.**

It doesn’t matter, though, since that’s not how comedy works. Anything can be funny. Any subject can be mercilessly mocked. Nothing is off limits.*** The trick is, it’s not about what you’re making fun of, but how you’re making fun of it. Armando Iannucci understands that, and at no point does he make jokes about cruelty. He’s saved his mockery for the men at the highest reaches of Soviet power, men with almost limitless power who have limitless pettiness. Along with co-writers Peter Fellows, David Schneider, and Ian Martin, Iannucci has written a script that’s hilariously profane and a skillful balancing act between a madcap farce and an atrocity exhibition.

Iannucci also directs, and if you’ve seen his film In The Loop or his HBO series Veep, you know that he excels at portraying the idiocy and treachery within the corridors of power. He’s got a large cast of characters and he juggles the focus between them skillfully. The evocative costuming and sets feel period accurate, and Iannucci frequently shows us towering Soviet architecture that dwarfs the small men living inside.

Iannucci also decides to have the actors speak in their normal accents. It’s a little jarring to hear Adrian McLoughlin’s Stalin with a Cockney accent or Steve Buscemi’s Brooklynese Khrushchev. However, it’s a hell of a lot more jarring to see something like Red Sparrow where Jennifer Lawrence sounds like she’s hunting Moose and Squirrel. Here, the lack of faux-Russian keeps the jokes and performances coming at a fast clip.

You might be wondering at this point who the hero of the film is. Sorry to disappoint, but there isn’t one. Every character is a liar, a schemer, someone with oceans of blood on their hands. Simon Russell Beale’s Beria is the worst, and he plays the head of the NKVD as an enthusiastic torturer and rapist. Steve Buscemi’s perpetually annoyed Khrushchev is another standout, as is the hyper-macho Zhukov played by Jason Isaacs. There isn’t a single weak link here, and every actor absolutely goes for it.

Humor is subjective. We all know that, but it’s easy to forget sometimes. Good comedy gives you a belly laugh and sends you out of the theater with a smile. Great comedy has a target, and its point of view makes you guffaw and think equally. The Death of Stalin is a great comedy about the hilarity of evil, one set in the past that has timely echoes into our chaotic present.

*The Supreme Court ruled that line-item vetoes are unconstitutional in 1998. You’d think the guy who’s the Commander-in-Chief would know that. You’d think that, anyway.

**To paraphrase Jurassic Park, art finds a way. A number of Russian movie theaters screened the film, claiming they never received word that the film’s exhibition license had been revoked. I would also bet money that bootleg discs of the movie are all over Russia.

***A good example of this is Four Lions, a hilarious film about a group of bumbling Islamic suicide bombers.

Tim Brennan
Tim has been alarmingly enthusiastic about movies ever since childhood. He grew up in Boulder and, foolishly, left Colorado to study Communications in Washington State. Making matters worse, he moved to Connecticut after meeting his too-good-for-him wife. Drawn by the Rockies and a mild climate, he triumphantly returned and settled down back in Boulder County. He's written numerous screenplays, loves hiking, and embarrassed himself in front of Samuel L. Jackson. True story.
Tagged: adrian mcloughlinandrea riseborougharmando iannuccijason isaacsjeffrey tambormichael palinrupert friendsimon russell bealesteve buscemithe death of stalin