A B Minus B-Movie

B-movies aren’t really a thing, any longer. On the other hand, they’re absolutely a thing. Back in the day, a b-movie was the second movie on a double bill. They generally were mid to low-budget and didn’t have stars, but generally did have copious amounts of gore, nudity, violence, or all of the above. Also, b-movies were usually genre fare, so you’d see them in the sci-fi, action, horror, western, exploitation, or crime areas of the movie world.

The trap that people fall into sometimes is assuming that a b-movie is either:

You might think that a movie with any or all of these elements would be cretinous trash that’s unworthy of consumption. Often it is! But do a little judicious digging, and you’ll find instances of filmmakers exploding with creativity despite meager resources. You’re Next is a very good b-movie, as is RoboCop, Tucker and Dale vs. Evil, and Trespass.* 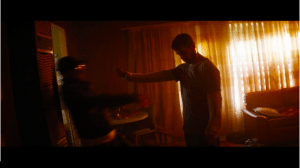 For the most part these days, b-movies have been transmogrified into direct-to-video features that are found on physical media like blu-ray or live on streaming services like Netflix. Once in a  while, against all rational thought, a b-movie is released theatrically. It’s an illogical curiosity, not unlike an inflatable dachshund.** Upgrade is one of those, and while it never embodies the best trailblazing spirit of superior films, there are occasional pleasures to be found.

We’re unceremoniously dropped into the not-too-distant future of an unnamed American city. Police drones prowl the skies keeping an eye on everyone. Automated cars zip to and fro. The amusingly named Grey Trace (Logan Marshall-Green) doesn’t care for it. He’s a stubbornly analog type who prefers tinkering on classic muscle cars to all of this newfangled technological foolishness. His personality-free wife, Asha (Melanie Vallejo), has a vaguely specified yet well-paying career at a high-tech firm, so Grey doesn’t need to worry about living in a shack like the Unabomber.

Grey has refurbished a car for secretive tech wizard Eron (Harrison Gilbertson), and while he and Asha are dropping it off, Eron shows them his masterpiece. It’s called Stem, and it has the potential to give quadriplegics the chance to walk 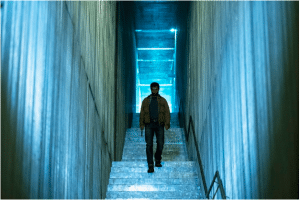 again. Will this mind-blowing discovery become a plot point later? Yes, but wouldn’t it be funny if it wasn’t?

Anyway, in a scene that will surely piss off Elon Musk, Grey and Asha are in a horrible car accident when their auto-drive system malfunctions. As they crawl from the wreckage, Asha is swiftly assassinated by a group of cyborg mercenaries, led by the vicious Fisk (Benedict Hardie). Grey survives the attack and, surprise surprise, becomes a quadriplegic. Months pass, and his mother Pamela (Linda Cropper), looks after her shattered son. Life looks like a big old bummer, until Eron arrives with an offer.

He implants Stem into the base of Grey’s neck, and before you can say, “Grey can walk again,” Grey can walk again. Actually, he can do a hell of a lot more than walk. Stem is sentient (voiced by Simon Maiden), and when Grey relinquishes control and allows Stem to override his body, he’s able to fight with computerized precision and boost his senses to superhuman levels. Together, Grey and Stem will team up to Make The Bastards Pay. He’ll also have to deal with Cortez (Betty Gabriel), a sharp detective who suspects that the quadriplegic Grey may not be as quadriplegic as he seems.

In 2014, Johnny Depp starred in Transcendence, a science fiction movie about artificial intelligence. It’s not a good 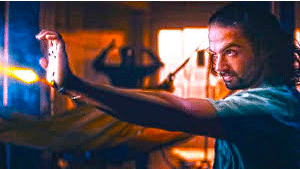 film, since it’s neither smart enough to probe the blurring of the line between man and machine nor dumb enough to turn Depp into a cyborg killing machine. Upgrade doesn’t care about the philosophical implications of a union between the human and the artificial. It’s far more interested in a dude getting his jaw violently unhinged, and you know what? There’s a place for that in this world.

This is the second film directed by Leigh Whannell, and if I told you he became successful by writing many of the films in the Saw and Insidious horror franchises, you’d probably respond with, “Ah, that explains it.” Whannell set out to make a thrill ride with plenty of gore and a John Wick-esque sense of action. It’s a movie best enjoyed with pizza, beer, and a group of friends hooting enthusiastically. While there are only a few action scenes, they’re shot with creativity and style. The production design is slick, and despite some occasionally dodgy CGI, things generally look good. In all honesty, I’m extremely impressed by Whannell’s filmmaking here. He had a budget of less than $10 million and delivered a movie that easily looks like it cost $60 million. 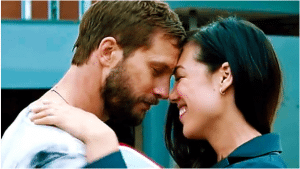 Whannell wrote the script, and if you squint a little, you can see echoes of Saw. There’s the hardcore violence, the careful world building, and the frequently sloppy character work. The character of Asha is not, in fact, a character. She’s a plot device designed to be fridged*** and give Grey a motivation to kick ass. Along similar lines, the evil cyborg Fisk believes in his superiority over mere humans. Did it evolve over time? Was he ever conflicted about it? No, foolish filmgoer! He’s just evil. Whannell’s script is frustrating, because he sets up a number of fun and interesting details in his world, but rarely populates it with three-dimensional characters.

For the most part, the cast ain’t so hot. I did get a kick out of Betty Gabriel’s perceptive cop Cortez. She fills out an underwritten role, and provides us with humor, warmth, and curiosity. You’ve seen Logan Marshall-Green in Prometheus and Spider-Man: Homecoming, but he didn’t make much of an impression on me until now. Here, he delivers a fun physical performance, and I thoroughly enjoyed his astonished facial expressions watching as his body methodically beat the hell out of luckless opponents. It’s a legitimately good performance, and I wonder if this film will serve as a calling card for higher profile projects.

Is Upgrade a good film? Well, sort of. I can very easily see it becoming a cult film beloved by a certain kind of cinephile, and as b-movies go, I’ve certainly seen worse. This film didn’t quite reach my sweet spot, but if you’re in the market for some decent action, some impressive gore, and some highly impressive technical filmmaking, you could do a lot worse.

**Seriously! Check this out.

***Fridging is a thing that, in this day and age, needs to end. You can learn more about the genesis of this concept here.

Tim Brennan
Tim has been alarmingly enthusiastic about movies ever since childhood. He grew up in Boulder and, foolishly, left Colorado to study Communications in Washington State. Making matters worse, he moved to Connecticut after meeting his too-good-for-him wife. Drawn by the Rockies and a mild climate, he triumphantly returned and settled down back in Boulder County. He's written numerous screenplays, loves hiking, and embarrassed himself in front of Samuel L. Jackson. True story.
Tagged: benedict hardiebetty gabrielharrison gilbertsonleigh whannelllinda croppermelanie vallejosimon maidenupgrade