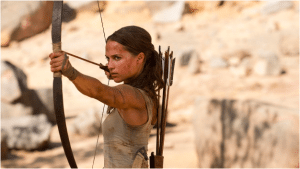 Guys, I have some righteous science to lay on you. For some of you, this information will come as precisely no surprise whatsoever. For others, this will create feelings of anger, confusion, and a general feeling of chumpdom. I can’t help any of that, I can only report to you my findings based on literal seconds of research. You ready?

Here in the Brennan household, we’re mild gamers. While I occasionally enjoy wreaking vehicular havoc in Grand Theft Auto, my wife appreciates the more cerebral pleasures of Skyrim. My dear friend Gina and her husband Curtis go way beyond mild gaming, and they have side-by-side gaming rigs set up in their home, allowing them to own noobs together late into the night. Ain’t love grand?

Video games are a compelling artistic medium,* one enjoyed by men and women for a variety of reasons. They can go beyond just cheap thrills, creating moments of real pathos, tragedy, wonder, and hope. They also are making a real effort to go beyond being utterly male dominated, where women exist only as an object of titillation. Where did this start? Well, it kind of started with Lara Croft. 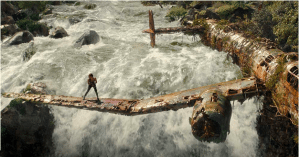 Created in 1996 for the Tomb Raider game franchise, Croft was originally an Indiana Jones knock-off, seeking ancient artifacts with her twin pistols, impractical short shorts, and cartoonish physical proportions. As time went on, she became more realistic, and the removal of big breasts and a tiny waist transformed her from a sex symbol into a survivor. Her rebooted games were a hit, which meant it was time for Hollywood to take another swing at a video game film adaptation. Does this iteration of Tomb Raider score? Well…sorta.

We’re introduced to Lara Croft (Alicia Vikander) getting her ass handed to her in a shabby amateur boxing ring in London. Our Lara is not exactly setting the world on fire, as she works as a bicycle courier and lives in a lousy flat. Why is she slumming when she comes from extreme wealth, you might ask? Her father Lord Richard Croft (Dominic West) went missing years earlier. She can collect her inheritance, but only if she signs legal documents declaring him legally dead. Lara isn’t ready for that.

After being arrested for a bike accident, Lara is bailed out by Ana Miller (Kristin Scott Thomas, slumming), her father’s business associate. She’s told by Ana that if she doesn’t claim her inheritance, it will be sold off. As she’s grimly preparing to sign the paperwork, company lawyer Mr. Yaffe (Derek Jacobi, also slumming) gives her an intricate puzzle. Lara being Lara, she solves it immediately, and discovers a hidden key. 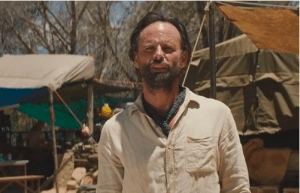 The secret leads her to more secrets, and soon Lara is en route to a mysterious hidden island somewhere in the Sea of Japan. She’s joined by Lu Ren (Daniel Wu), the captain of the good ship Endurance, and his father has also disappeared. What a coincidence…or is it?! Armed with a detailed journal from Lord Richard, Lara and Lu think they know the island’s location.

The good news is, they find it. The bad news is, their ship sinks and Our Heroes are promptly captured by a heavily armed band of ne’er-do-wells. Their leader is Mathias Vogel (Walton Goggins), and as you would expect with a name like Mathias Vogel,** he’s a ruthless slimeball. Vogel is leading an expedition searching for, coincidentally/not coincidentally, the very thing Lara’s father was searching for! Along the way there will be fistfights, many people inconveniently pierced by arrows, puzzles solved, traps activated, and Lara dangling from lethal heights. Lots and lots of dangling.

Despite my snide tone, I enjoyed Tomb Raider. I know, this is now the second film in two weeks where we’re dealing with a troubled protagonist who must solve the riddle of her father’s disappearance. Unlike A Wrinkle in Time, at no point does Oprah appear in the middle of a dangerous cavern to offer Lara Croft wise counsel. While that would have added a sorely needed element of weirdness, Tomb Raider is still officially Pretty Good.

Directed by the awesomely named Norwegian filmmaker Roar Uthaug, what we have here a soft remake/reboot/rip-off of Indiana Jones and the Last Crusade. Prepare yourself for a journal crammed full of clues, hairsbreadth escapes and lethal traps.*** Still, Uthaug gives us a couple of fun action sequences, including a bike chase through London and a sequence involving a waterfall and a crumbling airplane. There are some occasionally jarring tonal shifts when he tries to go for gritty realism, with Lara almost constantly getting the crap beat out of her, but then he remembers he’s making a movie based on a platforming video game.

Much like the direction, the screenplay by Geneva Robertson-Dworet and Alastair Siddons is also officially Pretty Good. On the one hand, there are a number of characters dealing with the trauma of missing families. Lara herself has an arc where she idolizes her missing father and must learn from him and learn to forgive him. This kind of thing is pretty common in genre movies/books/games, and I appreciated that the writers made a genuine effort to give Lara a strong emotional life and relationship with her father. On the other hand, they gave us a not particularly compelling villain and a hero who occasionally makes decisions that are dumb as toast.

The cast is fine, though I was a bit disappointed that Walton Goggins wasn’t given a bit more of a meaty role as the wicked Vogel. It’s also a bit of a shame that Daniel Wu’s Lu Ren is introduced, has an appealing fraternal chemistry with Vikander, but then is sidelined for most of the movie and stands around looking concerned. 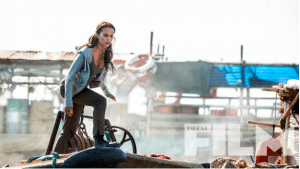 I suppose it doesn’t matter, because this film is all about Lara Croft and Alicia Vikander. You’ll remember that after winning an Academy Award for Best Supporting Actress, Angelina Jolie took a run as the titular Tomb Raider for a couple of movies. Vikander also won the same award and is playing the same character. Her Lara is more intelligent and more emotionally open. There’s a scene where, after killing a man, she slumps next to the body looking disturbed. But if you’re worried that this is going to turn into Lars Von Trier’s Indiana Jones, don’t be alarmed. Vikander runs, jumps, climbs, shoots, and makes everything look difficult, and fun enough, so that we have a reasonably good time.

Lara Croft is a valuable intellectual property, and the rebooted Tomb Raider video games have given female gamers a protagonist that no longer lives in the Venn diagram between sleazy and empowered. The film is fine, and while I enjoyed watching it, I can’t imagine seriously wanting to give it another viewing. But we do have a strong Alicia Vikander performance, and if a sequel can measure up to her efforts, I’d certainly be interested in playing.

*But are video games art, really? Roger Ebert didn’t think so, and he made his opinion known here. After a firestorm of criticism, Roger (slightly) amended his position here.

***There are no Nazis, but since Vogel and his men almost certainly would have voted for Donald Trump, it’s close enough.

Tim Brennan
Tim has been alarmingly enthusiastic about movies ever since childhood. He grew up in Boulder and, foolishly, left Colorado to study Communications in Washington State. Making matters worse, he moved to Connecticut after meeting his too-good-for-him wife. Drawn by the Rockies and a mild climate, he triumphantly returned and settled down back in Boulder County. He's written numerous screenplays, loves hiking, and embarrassed himself in front of Samuel L. Jackson. True story.
Tagged: alastair siddonsalicia vikanderdaniel wuderek jacobidominic westgeneva robertson-dworetkristin scott thomasroar uthaugtomb raiderwalton goggins