Home » Blog » Movies » You Winchester Some, You Lose Some

You Winchester Some, You Lose Some

Some buildings feel wrong. You set foot inside them and you feel uneasy, the hairs on your arms stand up, every instinct tells you to get the hell out of there with a quickness. Why does that happen, though? Is it an evolutionary throwback to when we mammals were tiny, bite-sized rodents? Is it because our minds are playing tricks on us? Or is it because the place is haunted?

Go ahead and scoff. But somebody pretty smart once wrote, “There are more things in heaven and earth, Horatio, than are dreamt of in your philosophy.” We humans only evolved about 200,000 years ago, and we’re arguing about the reality of global warming, so clearly we’re not that friggin’ smart.

I had my own run-in with the unexplained. As a callow teen*, my father and I took a vacation out to sunny California. While in San Francisco, we toured Alcatraz, the famous island prison that was allegedly inescapable.** One of the cells we were invited to step into was advertised as formerly housing the legendary Al Capone. You could step into the tiny stone enclosure and get a glimpse into the reality of incarceration.

Was it really Capone’s cell? Did the famous crime boss legitimately spend time there, feeling powerless and knowing his brain was rotting away due to syphilis? I have no idea. What I do know is that a corner of the cell was colder than the rest of the area. No drafts or anything like that, it was simply several degrees chillier. I did not enjoy that experience, much like I did not enjoy Winchester, a film partially based on actual events related to the supernatural. 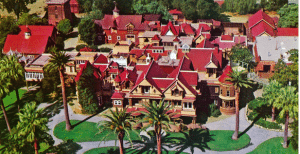 It’s 1906 in San Francisco, and we’re introduced to Dr. Eric Price. His wife has died under mysterious circumstances, and he deals with the loss by retreating into laudanum addiction. He also carries around a rifle cartridge with“Together Forever” engraved upon the side, which I did not find super romantic, but whatever.

The good doctor is contacted by a representative of the Winchester Repeating Arms Company. Sarah Winchester (Helen Mirren) is the widow of the gun manufacturer’s founder, and she’s currently the one in charge. Well, not exactly in charge, as such, since her behavior has become a little erratic. Dr. Price is offered a ludicrous sum of money for a seemingly straightforward task. His job is to travel to the Winchester House in San Jose and assess if Sarah is legally sane.

Being a good American, Dr. Price takes the money. He arrives and swiftly upgrades his diagnosis from erratic behavior to full-on bat-poop crazy. After the deaths of her husband and infant daughter, a medium tells Sarah that the spirits of all those killed by Winchester firearms want retribution. Sarah has inherited millions, and she’s not shy about spending it. So she responds the way many of us would, which is to hire massive teams of construction workers to transform an 8-room farmhouse into a sprawling mansion with over 100 rooms.

Sarah has only slightly less money than Scrooge McDuck, and she invests in technological innovations like communications tubes, indoor plumbing, and push-button gas lighting. She also orders stairs to be built that go precisely nowhere, doors that open onto alarming drops, and windows overlooking other rooms. No, she’s not building Hogwarts. That’s too bad, but Sarah’s “plan” has a purpose. In addition to creating an asylum to house the spirits, specific rooms are created to look exactly like the room in which certain ghosts died. She’ll help some of them pass on.

Sarah doesn’t live in Casa de Bizarro alone. Her niece Marian (Sarah Snook) resides there overseeing the place. Marian’s son Henry (Finn Scicluna-O’Prey) is there as well, and since he’s a kid in a horror movie, he seems to have an inconvenient case of possession. Now, Dr. Price must determine if Sarah is truly as mad as a hatter and confront his beliefs about the supernatural. He also has a bunch of cranky ghouls to deal with. Who’s he gonna call? Nobody, since proton packs haven’t been invented yet.

Listen, I’ve been to the real Winchester Mystery House, and it is a seriously weird-ass place. More than anything else, I came away feeling that Sarah Winchester was Not Okay. Her beliefs and her response to the gun violence caused by her company*** could make for a compelling and interesting film. Sometimes, while watching Winchester, I got glimpses of the film that could have been. 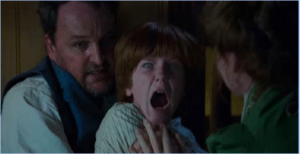 Part of the problem is that the story isn’t quite a good match for the filmmakers. The platonic ideal of this film is spooky rather than freaky, in which viewers have a chance to languish in the mind bending weirdness of the Winchester House. Parts of the film are quiet and effective. In other parts, it’s so cheesy you could use it to make nachos.

Directors Peter and Michael Spierig are German/Australian filmmakers best-known for the excellent creature feature Daybreakers. The Spierig Brothers have a real aptitude for being able to do an awful lot with relatively small budgets. They also have an almost pathological love of jump scares, and for a while there during the film, it seemed as if boogedy-boogedy moments were happening just for the hell of it. That’s particularly the case during the third act, where the film gleefully goes off the rails. People fly around, undead critters menace the living, stuff collapses. More becomes less. Also, for a place that has over 100 rooms, it frequently feels like we’re mostly seeing four of them. We needed more moments just soaking in the environment.

The Spierig Brothers co-wrote the screenplay with Tom Vaughan. It’s occasionally atmospheric, particularly the scenes with Helen Mirren being interviewed, or Jason Clarke exploring the joint. There are a few moments where you can feel the script straining, like it wants to get into how people respond to violence and what it means. Then it retreats from ideas and settles down in safer territory with possessed kids and malevolent spirits. Was this a studio note? Did the Spierigs lose interest in the more sociological aspects? I don’t know, but the film is poorer for it.

If nothing else, we have a couple of good performances to savor by a couple of pros. Jason Clarke has appeared in a ton of films. Some good, like Dawn of the Planet of the Apes, and some not so good, like Child 44. As Dr. Price, Clarke is a flawed but likable lead. He’s comfortable playing a character that’s thoughtful, and we can see him trying to make sense of the madness around him. Helen Mirren is a living legend, partially due to the fact that she has appeared in approximately 17 million films. Even when she appears in foolishness like Red, she’s worth watching. As Sarah Winchester, she has the steely calm of a true fanatic. It doesn’t matter if we believe Sarah regarding the spirit world, what matters is she believes it.

Should you spend your valuable time seeing Winchester? Calibrate your expectations appropriately and you might have fun. There are some clever set pieces, and occasionally we get a good sense of the strange reality behind the horror artifice. Occasionally isn’t enough, though, and we could have had something special. It’s not a bad movie, just a disappointing one.

**Nope! Check out Escape from Alcatraz, an excellent Clint Eastwood film about the breakout.

***As responses to gun violence go, building a house to trap ghosts is no more absurd than, say, arming elementary school teachers.

Tim Brennan
Tim has been alarmingly enthusiastic about movies ever since childhood. He grew up in Boulder and, foolishly, left Colorado to study Communications in Washington State. Making matters worse, he moved to Connecticut after meeting his too-good-for-him wife. Drawn by the Rockies and a mild climate, he triumphantly returned and settled down back in Boulder County. He's written numerous screenplays, loves hiking, and embarrassed himself in front of Samuel L. Jackson. True story.
Tagged: ben blockfinn scicluna-o’preyhelen mirrenjason clarkemichael spierigpeter spierigsarah snooktom vaughanwinchester