Home » Blog » Movies » You Will Believe A Woman Can’t Sing

You Will Believe A Woman Can’t Sing 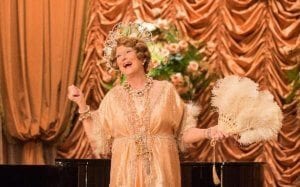 Not everyone should follow their dreams. I know, I’m an absolute creep for saying so. We live in a society that pushes self-actualization, and if you just believe in yourself and follow your bliss, everything will work out. But here’s the thing. If, in your personal Venn diagram, talent overlaps with passion, then by all means, carpe the hell out of that diem. But what if you’re no good at the thing you love?

But wait! Before we start reflexively sneering at Millenials and loathsome helicopter parents, we need to remember that there’s a long and proud history of fools, nitwits, jackasses, and dummkopfs in human life. General George Armstrong Custer was absolutely certain on June 25, 1876, that the 7th Cavalry could handle anything it encountered at Little Big Horn. President George W. Bush was totally convinced that dismantling the Iraqi Army was a smart move. Sean Connery turned down the role of Morpheus in The Matrix, turned down the role of Gandalf in The Lord of the Rings, then overcompensated and accepted the lead role in The League of Extraordinary Gentlemen. Clearly, a precedent was set by people who should have known better and did not, in fact, know better.

But should someone be celebrated because they had the courage to try and seize their dreams? Is it better for them, like Icarus, to fly too close to the sun? I struggled with that as I watched demigod Meryl Streep in her new film, Florence Foster Jenkins.

Based on real events, Streep plays Jenkins, a wealthy socialite comfortably ensconced in the New York art scene during 1944. It would seem she has a perfect life. She’s fabulously wealthy and has a genuinely sweet marriage with St. Clair Bayfield (Hugh Grant). She loves art in general, and music in particular. So much so that she spends gobs of money to act as a benefactor for talented folks like the celebrated conductor Arturo Toscanini. She threw lavish parties for her friends that featured massive amounts of sandwiches and potato salad ladled from a bathtub.

As so often happens, there was a problem. As a young woman, Florence contracted syphilis from her first husband. While this was bad, the treatment was worse, considering it was a mixture of mercury and arsenic. Perhaps understandably, Florence and St. Clair never consummated their union, and St. Clair spends his nights with his mistress Kathleen (Rebecca Ferguson). Now in her 70’s, Florence’s health is in decline, and she feels her time is limited.

As a result, she decides to realize her dream as a singer. The only problem is, Florence can’t sing. At all. The opera impresario Ira Siff said about her that, “She would stray from the original music, and do insightful and instinctual things with her voice, but in a terribly distorted way. There was no end to the horribleness.” Yet, St. Clair loves his wife, and her patrons love her money. A complex scheme is hatched in which Florence receives voice lessons, the pianist Cosme McMoon (Simon Helberg) is hired as an accompanist, and St. Clair goes to absurd lengths to shield his beloved wife from hearing any negative criticism.

Let’s get this out of the way now. The audience that I saw Florence Foster Jenkins with absolutely adored it. If you’ve read this far and the film’s trailer has grabbed you, odds are you’ll like it too. No wonder, considering the pedigree. It’s directed by Stephen Frears, best known for The Queen, High Fidelity, and the absolutely vicious The Grifters. Frears is a rock solid filmmaker, and while he may not have an immediately recognizable style, he’s able to tell a good story well. Has Frears made Oscar bait here? Yep, without a doubt.

Along with his screenwriter Nicholas Martin, he’s made a movie of pure piffle. It’s absolutely the lightest fluff, exceptionally well-made fluff, but fluff all the same. This film is exquisitely designed to provide a pleasant experience to viewers. Not too exciting, not too suspenseful, just…nice. We have a standard-issue “believe in yourself and your dreams” kind of thing, and we’re meant to be inspired by Florence, despite the yawning chasm between her delusions and reality.

It’s hard not to like her, considering Streep’s portrayal of her. We all know that Meryl Streep is one of the greatest actors to ever live and that she can play anything. She could convincingly play me, probably more so than I could myself. As Florence, despite being utterly untethered with reality, she’s absolutely charming. You can feel her passion, her deep love of music. All she wants is to share that passion with others, to give the world some much-needed joy. Additionally, in reality, Streep is quite a good singer. It’s hard to believably sing poorly. But here, Streep commits war crimes against the act of singing, and I was highly impressed by her caterwauling.

Her chemistry with Hugh Grant is aces. With the exceptions of About a Boy and Cloud Atlas,* Grant is not known for challenging himself. He made a career out of playing a floppy-haired fop and stuck with it for the most part. But when he pushes himself, he’s able to give us impressive and nuanced performances. Initially, we might think his St. Clair is a bounder and a cad, leeching off Florence and enjoying her vast wealth. But there’s real affection and real love between them, and he sincerely wants her protected and happy.

Here’s the part where, much like a mean-spirited critic in the film, I can’t leave well enough alone. Was Florence a patron of the arts? Yes, and God bless her for that. Ask any artist, and they’ll tell you that the best ways to support them is by giving them the means to create art, showing support for them, and spreading the word. But when it comes to her singing, we’re firmly trafficking in the realm of delusion.

Florence wasn’t a woman who overcame numerous hardships and practiced relentlessly until she was good enough to play in the big leagues. There were no obstacles to overcome since she was protected to a degree that she didn’t know the obstacles existed. Every concert she performed at was carefully staged and coordinated, with the help of her husband. At the end of the film, she’s just as horrific a singer as she was in the beginning. Ultimately, she didn’t achieve anything. She was a dilettante who simply bought her way in, and the fact that the film fails to understand that is what torpedoes the inspirational angle.

In the end, maybe it doesn’t matter. Florence Foster Jenkins wasn’t made to ask trenchant questions about the nature of art and performance. Like a $12 bottle of wine, it’s meant to make you feel good. Frears, Streep, and company have made a very kind movie about a fantastically untalented woman who simply wanted to make others happy.

*An astonishing film, particularly for the novelty of seeing Grant play a post-apocalyptic cannibal.

Tim Brennan
Tim has been alarmingly enthusiastic about movies ever since childhood. He grew up in Boulder and, foolishly, left Colorado to study Communications in Washington State. Making matters worse, he moved to Connecticut after meeting his too-good-for-him wife. Drawn by the Rockies and a mild climate, he triumphantly returned and settled down back in Boulder County. He's written numerous screenplays, loves hiking, and embarrassed himself in front of Samuel L. Jackson. True story.
Tagged: florence foster jenkinshugh grantmeryl streepnicholas martinrebecca fergusonsimon helbergstephen frears