Why? Because They’re Dumb – Local Movie Reviewer Takes on Predator

On the cinematic Venn diagram, there can be an awful lot of overlap between a great movie and an awesome movie. Before we go too much further, let me stake out what I mean by that. A great movie is one with impressive production design, acting, screenwriting, and direction — essentially all the ingredients have been baked in to give us a film of quality. Apollo 13 is a great movie, as is Monster and Deliverance.

An awesome movie, on the other hand? That’s a movie that directly tickles our reptile brain, delivering a thrill, a joke, something purely designed to elicit an immediate response. Do awesome movies concern themselves with rich characterization or innovative direction? Naw, son. These are the kinds of movies that pair well with beer, pizza, and a roomful of rowdy friends. The Last Boy Scout is an awesome movie, as is Demolition Man and The Relic.

Can an awesome movie have aspirations of greatness? Sure, just look at some of the Star Wars movies, or a larger chunk of the Marvel Cinematic Universe. These films have a patina of respectability, and try to manage that tricky balancing act between quality and cool. Sometimes, that respectability feels a little too safe.

There’s something refreshing about a movie that wears its lack of pretense on its sleeve. It is what it is, and it’s content to be nothing more than that. Exhibit A is The Predator, a movie that features shoddy special effects, a laughably stupid script, and a third act that’s borderline incomprehensible. If I’m being honest, though? I enjoyed it. 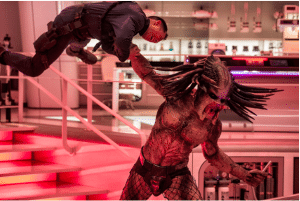 We begin in the vast reaches of space, as one big-ass spaceship fires on a smaller-ass spaceship. The smaller craft narrowly escapes, which is good! It then proceeds to crash land on Earth, which is bad. That’s especially inconvenient for Quinn McKenna (Boyd Holbrook), a military sniper attempting a hostage extraction as the ship crashes. Things get even more inconvenient when the iconic and extremely angry alien hunter emerges from the wreckage and proceeds to decimate Quinn’s team. Quinn narrowly escapes,* but not without swiping a mask and an arm-mounted weapons system from the fiendish thingy. Does he turn the alien tech over to his superiors? Nope! He mails it home to his family. Why would he do such a thing? Welp, because he’s dumb.

Meanwhile, we’re introduced to evolutionary biologist Casey Bracket (Olivia Munn), a scientist who is rudely accosted by a group of shadowy government operatives. Led by unsubtle maniac Traeger (Sterling K. Brown), these folks have been studying the actions of Predators on Earth for years. They have acquired technology, tissue samples, and now the unconscious Predator that jacked up Quinn’s team. Do they euthanize the fiendish thingy so that a) they can perform an exhaustive autopsy and b) so that it can’t pose a threat to them? Nope! They strap it to an operating table. Why would they do such a thing? Welp, because they’re dumb.

While all of that foolishness is going on, we meet Quinn’s 11-year-old son Rory (Jacob Tremblay). He’s on the spectrum, and we know that because (heavy sigh) he’s superintelligent and seems to have a photographic memory. The lad receives a mysterious package from his pops. Inside is…you guessed it, the Predator gear. As young Rory is screwing around with the tech, he unwittingly activates a homing beacon. The signal is picked up by another Predator, an Apex Predator, if you will, who’s on the hunt for the first Predator and the gear. When the gear starts doing weird stuff, does Rory tell his mom, Emily (Yvonne Strahovski)? Nope! He hides it and keeps screwing around with it. Why would he do such a thing? Welp, because he’s dumb. 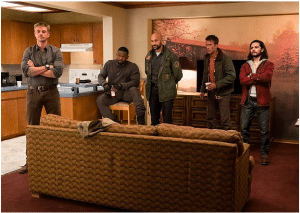 Hey, remember Quinn that we talked about like an hour ago? He’s been labeled a lunatic, and Our Hero is tossed on a bus filled with a group of colorful military whacko birds called The Loonies. They are:

When all hell breaks loose and both Predators and Predadogs** are mauling everyone in sight, Quinn must try to save his son. Do The Loonies take that opportunity to peace the hell out of there? Nope! They instantly bond with a 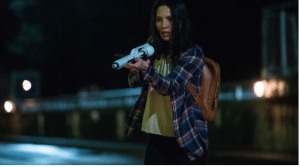 complete stranger and risk their lives to help him. Why would they do such a thing? Welp, because they’re dumb.

Can and should we expect high quality entertainment from the fourth installment in Arnold Schwarzenegger’s 1987 Predator series? Critic Robert Warshow wrote, “A man goes to the movies. The critic must be honest enough to admit he is that man.” Pretentious quotes might not have a home in this particular review, but it’s the only way I can explain to you how The Predator made me feel. There were two tracks running in my brain during the film. The first was the Critic Track, which racked up an impressive amount of criticisms. The second was the viewer track that repeatedly said, “Dude just got cut in half! That’s awesome.”

Shane Black directed, and we’ve got a real good news/bad news situation here. The good news is that Black knows why we’re here, and wastes zero time getting to the mayhem. His pacing is absolutely relentless, and even when many, many things happen, Black is shoving us onto the next set piece. His set pieces are hilariously gory, and I can imagine him cackling as he devises multiple ways for the human body to be shredded. The bad news?  We have a lot of shoddy FX work, clumsy editing, and a third act that’s almost impossible to understand due to hasty reshoots. I’m actually surprised that a major studio allowed a movie this sloppy to be released. 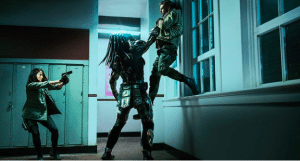 Remember about 3,000 words ago I talked about how dumb the script is? It is impressively stupid, but Black and co-writer Fred Dekker have crammed it full of profanity, jokes, and fun characterization. There’s a great running joke about how Predators are not technically predators, and the script gives the characters just enough personality to be memorable. Despite the script stretching your suspension of disbelief to traumatic lengths, the cast is game and goes to town on the chewy dialogue.

Speaking of the charismatic cast, everyone is clearly having a blast here. As our human villain Traeger, Sterling K. Brown is terrific. He’s an amoral maniac who spits out one-liners with vicious glee. Boyd Holbrook and Trevante Rhodes have easy chemistry, and these guys need to be in a buddy comedy as soon as possible. The majority of comic relief comes from the goofy shenanigans of Thomas Jane and Keegan-Michael Key. When the film remembers to give Olivia Munn something to do, she’s solid, and she’s someone I can see headlining a credible action franchise.

The Predator is dumb as toast, a careless and foolish blockbuster that has nothing useful to say about the nature of the universe or the human condition. But it doesn’t care about any of that. It’s determined to deliver gallons of blood, tons of jokes, and a good time. Get yourself some cheap beer, a whole bunch of chicken wings, and prepare to hogtie your brain for an hour and 47 minutes, because this movie definitely isn’t good. It’s just awesome.

*Movies like this are all about narrow escapes. Just once, I’d like to see an easy and convenient escape.

**You read that right.

Tim Brennan
Tim has been alarmingly enthusiastic about movies ever since childhood. He grew up in Boulder and, foolishly, left Colorado to study Communications in Washington State. Making matters worse, he moved to Connecticut after meeting his too-good-for-him wife. Drawn by the Rockies and a mild climate, he triumphantly returned and settled down back in Boulder County. He's written numerous screenplays, loves hiking, and embarrassed himself in front of Samuel L. Jackson. True story.
Tagged: boyd holbrookfred dekkerjacob tremblaykeegan-michael keyolivia munnshane blacksterling k brownthe predatorthomas janetrevante rhodes