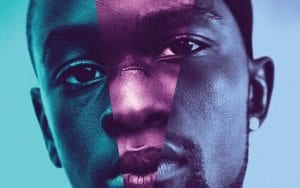 As you’ve probably noticed, 2016 has been an absolute garbage year. Our country elected a profoundly unqualified narcissist for President, tensions borne from race, gender, and sexual identity threaten to split us apart, and Florence Henderson, the mom from The Brady Bunch just died. Is it because David Bowie is no longer around to hold it all together for us? Probably.

But I told you there’s good news, and good news I shall deliver. 2016 has been a pretty damn fine year for movies. We got the excellent punks vs. neo-Nazis thriller Green Room, the thoughtful sci-fi film Arrival, and The Nice Guys, which is arguably the best comedy of the year. Just those films alone are an embarrassment of riches. Then we get Moonlight, a film of great beauty, power, and subtlety.

The film is divided into three segments, each examining a slice of time in the life of Chiron. During the first chapter, we meet Chiron as a young boy (Alex R. Hibbert), scornfully called “Little” by the bullies chasing him through the streets. He eludes them and hides in a boarded-up apartment. Juan (Mahershala Ali), a kindly drug dealer, finds the frightened boy and takes him out for a meal to try and draw him out of his hardening shell. Juan even brings the boy to his home, introduces him to his partner Teresa (Janelle Monae), and grants him a safe place to stay. Safety is in short supply, since Chiron’s mother Paula (Naomie Harris) is diving head first into drug addiction, and his father is nowhere to be found. Juan sees something good in Chiron, wants to protect him, and he acts as a surrogate father figure for the boy, even though he continues to sell drugs to Chiron’s mother.

In the second chapter, Chiron is now a gawky adolescent (Ashton Sanders), navigating the Darwinian hell of high school. He hunches his shoulders and tries to be invisible, but it doesn’t work, since he seems to have a target on his back that bullies can’t resist. He’s also trying to understand his emerging homosexuality, and he must do so in an environment that’s hypermasculine and almost totally lacking in compassion, He has nothing…almost. All he looks forward to are the brief moments where he spends time with his friend, Kevin (Jharrel Jerome).

During the third chapter, we meet the adult Chiron (Trevante Rhodes), who has gone through some changes. At first glance, with his muscular physique, do-rag, and street swagger, he’s the spitting image of Juan. But look closer, and you’ll still see the same hunted look, the same reluctance to speak, the same yearning to connect. The adult Kevin (Andre Holland) reconnects with Chiron, and when Kevin asks him, “Who is you, man,” it’s a question both Chiron and the film itself ponders.

There’s an old saying that, in order to tell a universal story, tell the most personal and particular story possible. Moonlight is indisputable proof of this. Based on Tarell McCraney’s play In Moonlight Black Boys Look Blue, screenwriter and director Barry Jenkins tells a story about an African-American coming to terms with his homosexuality. It’s a nuanced look at the fluidity of masculinity, the black experience, and the queer experience. Dig down further, and it’s a story about a person trying to figure out his identity. This is an essential part of being alive, and it’s one that we all grapple with.

A lesser filmmaker would have made this point through monologues or turgid melodrama. Jenkins goes the opposite direction. Chiron lives his life mostly in silence. The first time he’s touched, all we can hear is the rhythm of the ocean washing in and out upon the beach. Moments of longing, or desperation, are communicated through piercing stares. When he does speak, his cadence is halting, and his sentences are brief. Jenkins knows these characters, his life experience has informed them, and they feel fully rounded.

Jenkins is also directing a cast working at the absolute top of their game. Everyone, even those in the smallest roles, goes out of their way not to create big acting moments, but to be real, which is far more difficult. As Juan, Mahershala Ali is soulful and magnetic. He’s not quite playing a drug dealer with a heart of gold, but he’s a man with a core of decency who has been forced by circumstances to enter the criminal life. Naomie Harris’ performance as Paula is truly powerful, mixing selfishness, guilt, and intense regret.

But the trio of performances by Alex R. Hibbert, Ashton Sanders, and Trevante Rhodes, are nothing short of extraordinary. None of these three actors worked together during the filming, as Barry Jenkins didn’t want them influenced by each other’s mannerisms. Instead, he coached them to develop their own individual portrayal. But Rhodes, Hibbert, and Sanders seem to have had a mind-meld and tapped into something elemental. They’re clearly playing the same guy, and you can see it with the hunched shoulders, and the uncertain eyes darting around and taking in everything.

Ultimately, Moonlight is cinema that’s vital and profound. If there is any way humanly possible to put this film in front of your eyeballs, you owe it to yourself to do so. This movie is why movies exist.

Tim Brennan
Tim has been alarmingly enthusiastic about movies ever since childhood. He grew up in Boulder and, foolishly, left Colorado to study Communications in Washington State. Making matters worse, he moved to Connecticut after meeting his too-good-for-him wife. Drawn by the Rockies and a mild climate, he triumphantly returned and settled down back in Boulder County. He's written numerous screenplays, loves hiking, and embarrassed himself in front of Samuel L. Jackson. True story.
Tagged: alex r. hibbertandre hollandashton sandersbarry jenkinsjanelle monaemahershala alimoonlightnaomie harristarell mccraneytrevante rhodes