What The Blind Man Saw 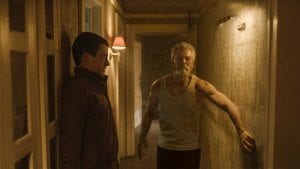 I’ve never been poor. Sure, money has been tight, and there have been times where I’ve had to, shall we say, get creative with my finances. But I’ve always occupied the middle-class strata, even if I’ve occasionally drifted down near the bottom rung of that particular ladder.

Too often, poverty forces our hand. You’ll hear judgmental rich folks sneer, “I don’t understand why those people* sell drugs. Why can’t they just get a real job, like I did?” These are the same people living in a golden bubble of privilege, and the closest they ever get to desperation is deciding whether or not to have non-fat whipped cream on their half-caf venti latte. Real desperation forces you into a survival situation. Don’t Breathe, the razor-sharp thriller from Fede Alvarez, knows all about desperation and the will to survive.

Set in the ruined neighborhoods of Detroit,** we meet a trio of teenage burglars. There’s Rocky (Jane Levy), who lives in a run-down trailer home with her alcoholic mother, her mother’s scumbag boyfriend, and her little sister Diddy (Emma Bercovici). Rocky’s boyfriend Money (Daniel Zovatto) is a wannabe criminal, but we sense he’s just a tad too dumb to go pro. Alex (Dylan Minnette) is the brains of the operation. He’s cautious, professional, and a nice guy who pines for Rocky. His dad runs a security company, and they have a pretty good scam going.

Using housekeys nabbed from the security company, the three waltz into the homes of rich people. Wisely, they avoid stealing cash, since larger sums will carry heftier jail sentences. Instead, they nab shoes, jewelry, whatever they can lay their hands on. It’s not the most lucrative scheme since they keep getting shorted when they sell the ill-gotten goods to their fence. But their latest target could very well be their last. He’s an unnamed blind man (Stephen Lang) living in a run-down house on Eight Mile Road. His daughter was killed in a hit and run. The perpetrator was a rich girl, and considering her family didn’t want her to do jail time, they settled with the Blind Man for an undisclosed sum.

Our “heroes” hear The Blind Man is sitting on a pile of cash, somewhere in the six figures, in the middle of a deserted neighborhood. They’ll just bust into the joint, grab the money, and smack around the Blind Man if necessary. How much trouble could he be? Turns out, a lot of trouble, since the Blind Man is a combat veteran who served heroically in Iraq. Despite being visually impaired, he’s still a nearly unstoppable killing machine. Now, the Blind Man has turned the tables on Rocky, Money, and Alex, and they must find a way to escape.

Not since the excellent You’re Next has a home invasion thriller inverted the rules so effectively, and created a thriller that’s honestly thrilling. Don’t Breathe is the second film directed by Uruguayan filmmaker Fede Alvarez. His first was the remake of Evil Dead, a horror flick known for being both unpleasantly intense, and the holder of a Guinness World Record for most fake blood used in a movie. While there’s some gore here, Alvarez dials down the viscera without sacrificing intensity.

Fact is, Alvarez does a whole bunch of things right. He’s incredibly efficient, and he gets his trio of thieves into the house about 15 minutes after starting the film. While there’s a bit of a loss in character development, Alvarez doesn’t screw around with cranking up the action. He also has a tremendous sense of geography. Like James Wan’s masterful work in The Conjuring, Alvarez gives us a quick visual tour of the house during the beginning stages of the break-in. That way, we learn where everybody is in relation to everyone else, and we learn all the exit points ahead of time. Alvarez also understands the rhythms of suspense, and he’s able to crank up the intensity gradually, letting it ebb and flow.

He co-wrote the screenplay with Rodo Sayagues. Interestingly, of the three thieves, Rocky’s character is the most well-rounded. She’s not “bad,” per se, she just wants a way out of poverty, and a way to protect her little sister and give her a decent chance. “Rich girls don’t go to prison,” the Blind Man says at one point. Poverty is a strong underlying theme here, and by contrasting what Rocky wants with the trauma that has solidified into insanity in the mind of the Blind Man, we get something that’s not just an empty exercise in style like Panic Room. It’s a little bit of a shame that Money’s character isn’t more than a loudmouthed schmuck, or that we don’t get more from Alex than his unrequited love for Rocky, but they’re really both supporting characters, and this film just aches to get to the meat of the plot.

For a film like this to work, you need a strong protagonist and a strong antagonist. Jane Levy previously worked with Alvarez on Evil Dead, and, as Rocky, she wears her determination on her sleeve. I like that these characters live in moral gray areas. I get that being poor sucks, but is it okay for Rocky and her crew to rob a blind guy? Maybe not, but Rocky is doing what she has to do to survive, and that kind of complexity makes her compelling.

Most people know Stephen Lang as Colonel Quaritch from the entirely forgettable Avatar. The guy is a workhorse, and IMDB lists an impressive 113 acting credits to his name. He’s a highly impressive character actor, and he goes a long way towards sketching a complete portrait of a human monster, especially considering he has very little dialogue. Yeah, there are a few too many scenes where the Blind Man seems to have the superhuman powers of Daredevil, especially when he seems to track his prey by smelling their shoes or through echolocation. But that’s why we have suspension of disbelief.

The film is very good, but there are a few things that keep it from tipping over into greatness. I’ve mentioned how Money and Alex stay firmly in the realm of two-dimensional characterization. There’s a scene of sexual violence that’s weirdly out of place, and it climaxes with a gut-wrenchingly foul moment near the end. Is that scene there strictly for shock value? Honestly, I don’t know. It feels like Alvarez is going the route of the old ’70’s exploitation filmmakers, injecting something shocking merely for the sake of being shocking. There’s also the Blind Man’s allegedly ferocious dog, and there are too many scenes where the dog seems ecstatically happy. The tension is undercut just a little when you consider that the main characters can avoid having their throats ripped out by giving the happy puppy belly rubs.

But no matter. Don’t Breathe is a viciously efficient thriller that’s also, unfortunately, relatable. It’s a battle of wills between two morally compromised characters. They’re trapped in the dark, together, and there might be no escape.

*Those people is one of those code words that people use to express a racist sentiment, without actually sounding overtly racist. More frequently used is the term thug, which, when used these days, does not actually mean either a violent person or a devotee of the Indian goddess Kali. I think you know what they’re really saying.

**But filmed mostly in Pomaz, Hungary.

Tim Brennan
Tim has been alarmingly enthusiastic about movies ever since childhood. He grew up in Boulder and, foolishly, left Colorado to study Communications in Washington State. Making matters worse, he moved to Connecticut after meeting his too-good-for-him wife. Drawn by the Rockies and a mild climate, he triumphantly returned and settled down back in Boulder County. He's written numerous screenplays, loves hiking, and embarrassed himself in front of Samuel L. Jackson. True story.
Tagged: daniel zovattodon't breathedylan minnetteemma bercovicifede alvarezjane levyrodo sayaguesstephen lang