Home » Blog » Movies » We All Float Down Here

We All Float Down Here 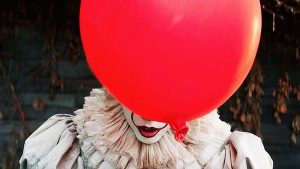 I wonder if Stephen King likes being an institution, because he sure is one. The guy has been in the writing business for over 40 years, and he’s become a genre unto himself. You may be one of his Constant Readers, you may bemoan his influence on popular literature, or maybe you’ve just read a few of his books, but you regardless know who he is and what he’s about.

Entire seconds worth of research shows me that, since 1976, there have been over 60 film and TV adaptations of his work. It goes without saying that they are of wildly different quality. Sure, you’ve got excellent works like The Shining and Misery at the top of the heap, but you also have exquisite crapola like The Dark Tower and Dreamcatcher.  Adaptations of King’s novels aren’t always so great, but when the source material starts out solid, you’ve got better odds of something special.

One of the most famous is It. King’s 1986 novel may not be his best work,* but it’s absolutely the Stephen King-iest of them. It’s got every one of his trademarks, including:

At over one thousand pages, It spans decades in the lives of its characters. In 1990, a made for TV miniseries based on the comically large novel was broadcast. While not terribly good, it boasted an instantly iconic performance from Tim Curry.** Ironically, 27 years later, we have another adaptation of King’s gigantus opus, and this is one of the best adaptations of his work, full stop.

The first of a two-part cinematic tale, we’re introduced to the town of Derry, Maine, in the late 1980’s. Derry looks to be your average small American burg, only there’s a distressing habit of children vanishing off the streets. We see that gnarly trend in action with the final minutes of the life of Georgie Denbrough (Jackson Robert Scott), an almost cartoonishly cute 6-year-old. While chasing his toy boat during a rainstorm, Georgie sees it head down a storm drain. He tries to retrieve it and comes face to face with Pennywise the Dancing Clown (Bill Skarsgard). Pennywise is no ordinary sewer-dwelling clown, but rather a malevolent interdimensional entity that feeds on kids. Their fear enhances the taste, so needless to say, things do not go well for Georgie.

The adults in Derry have established a curfew, but they don’t seem super interested in actually getting to the bottom of things. Georgie’s older brother Bill (Jaeden Lieberher) is a smart kid with a nasty stutter. He thinks Georgie might be alive somewhere, and he takes it upon himself to start investigating. Good thing he’s got help. His pals are the jumpy Stan (Wyatt Oleff), trash-mouthed Richie (Finn Wolfhard), the hypochondriac Eddie (Jack Dylan Grazer), the husky new kid Ben (Jeremy Ray Taylor), the tough as nails Beverly (Sophia Lillis), and Mike (Chosen Jacobs), who’s home-schooled due to being one of the only black people in town. They call themselves The Losers Club.

All of these kids have encountered dat boi Pennywise,*** or an iteration of him. The fiendish thingy knows the deepest fears of its prey, whether it’s an abusive father, an overprotective mother, or a garden variety fear of clowns, and uses that knowledge to pursue them.But the Losers Club members are all in a state of flux, a transition between childhood and adulthood. That knowledge, plus their teamwork, might help them to survive.

Guys, let’s be real. It is damn good. This film takes just about everything that works about the book, jettisons nearly everything that doesn’t (including a certain problematic af scene), and gives us a prestige horror movie with the full and confident backing of a major studio.

The 2013 horror flick Mama got director Andy Muschetti the job, but his work here is going to put him on the map. He’s good at jump scares, and trust me when I tell you there is a metric poop-ton of jump scares in this flick. More importantly, Muschetti excels at mood. He creates unsettling moments, where a cat witnesses the fate of Georgie, as well as feelings of wonder and fun where we’re just hanging with the Losers. There’s definitely a degree of nostalgia porn on display here, but Muschetti doesn’t lean into it quite as obnoxiously as something like Stranger Things.

In a different world, we almost had an adaptation of It written and directed by Cary Fukunaga, and we could have had Pennywise telling the kids that time is a flat circle while eating their legs. Aspects of Fukunaga’s and Chase Palmer’s original script were used, then rewritten by Gary Dauberman. I can’t say who’s responsible for what, but I’m delighted that we have a script featuring kids that sound and behave like regular kids. Many screenwriters write child characters as either miniature adults or as younger than they should be. The Losers are smart, caring, and determined, but they’re stepping into their early teen years and they act like it. Plus, if you remember anything about childhood, you’ll remember that when boys get to a certain age and learn about profanity, they enthusiastically embrace it. I particularly enjoyed that detail.

We also have to frequently give child actors a pass, but all of the kids playing our heroes do genuinely good work. The roles of Stan and Mike are annoyingly underwritten, and Wyatt Oleff and Chosen Jacobs are stuck playing respectively an uptight Jewish kid and a kid with the “character trait” that he’s…well…black. It’s a rare but sizable misstep from the writers, but Jacobs and Chosen sidestep their nearly non-existent parts and create compelling characters through force of will. Finn Wolfhard, whom you might have seen in Stranger Things, is hilarious as the motor-mouthed Richie, and I liked the sweetness of Jeremy Ray Taylor’s Ben. As Bill, Jaeden Lieberher has a quiet and steely bravery, and it makes sense why he’s the leader of the group. Jack Dylan Grazer’s Eddie is an amusing spitfire with heart. Sophia Lillis as Beverly, though…wow. She’s incredibly impressive, giving a layered performance as a smart and decent girl having to deal with false rumors of slut-shaming along with parental abuse. We can see her trying to shake off the pressures and sometimes, it looks like dealing with a murderous sewer clown is easier for her.

Speaking of murderous sewer clowns, let’s take a moment to talk about Bill Skarsgard. It’s been a while since we’ve been treated to a horror icon, but Skarsgard’s Pennywise is iconography on the level of Leatherface or Freddy Krueger. He’s not trying to be frightening, he just is frightening. He spent time working with a contortionist, and Skarsgard is all bizarre angles and weird vocal inflections. Pennywise has a sadist’s enjoyment of toying with his prey, and Skarsgard calibrates his role very carefully, knowing just when to throw out a quip and when to charge.

It ain’t perfect. The script needed another pass to beef up the characters of Mike and Stan, and at times the third act drags a little. Overall, however, we’ve got ourselves a very solid tale of kids going up against an unspeakable horror. It: Chapter 2 will be out at some point in the future, and we’ll see the grown Losers forced to deal with Pennywise again. That part is liable to be tricky, and we may get bombarded with ill-advised stunt casting and a potentially less compelling story. I’ve got fingers crossed that Muschetti and his team will return with something special. These Losers ended up winning.

*For my money, I’ll put ‘Salem’s Lot up against just about any other vampire novel.

**Is Curry’s performance as Pennywise genuinely good or just big and fun? Nothing against Curry, whom I like very much, but I’m not sure.

***With thanks to Scott Wampler.

Tim Brennan
Tim has been alarmingly enthusiastic about movies ever since childhood. He grew up in Boulder and, foolishly, left Colorado to study Communications in Washington State. Making matters worse, he moved to Connecticut after meeting his too-good-for-him wife. Drawn by the Rockies and a mild climate, he triumphantly returned and settled down back in Boulder County. He's written numerous screenplays, loves hiking, and embarrassed himself in front of Samuel L. Jackson. True story.
Tagged: andy muschettibill skarsgardchosen jacobsfinn wolfharditjack dylan grazerjaeden lieberherjeremy ray taylorsophia lilliswyatt oleff