Vince Carter – How Old is Old?

The 2019-20 NBA Schedule was just released, and the calendar is full of exciting games and stars visiting the Pepsi Center this season. The Lakers with Lebron and AD, the Clippers with Kawhi and Paul George, Zion is coming, as are Harden and Westbrook.  But I want you to circle November 19th as a game you may want to attend.

The Atlanta Hawks are coming to town.

Now, before you stop laughing, it’s true that Atlanta was only 29-53 last season, they’re not a playoff team, and while Trae Young is fun to watch, it’s hardly worth dealing with rush hour traffic for.  But a few weeks ago, Vince Carter announced that he would be returning to the Hawks, for his record 22nd and final NBA season at the ripe old age of 42.

Think about it.  A 42-year-old man still playing professional basketball against the world’s best. 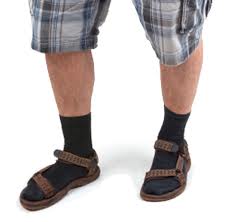 If you’re currently a college student reading this article, Vince Carter is old enough to be your dad.  How cool would that be versus the one you have now that walks around in his sandals with black dress socks?

Most gamers emulate their favorite players on NBA2K20.  When Vince Carter came into the league back in 1998, they were playing him on Nintendo 64.

4)      Nike is coming out with a new shoe to honor Vince Carter’s final season.  It’s called the Vince180. Not your typical fashion statement.  This low-cut shoe is made for walking, slips on for ease, has removable insoles to easily insert orthotics, and is highly recommended by the AARP. 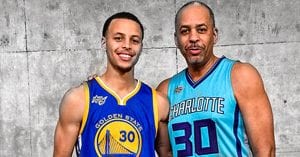 At the age of 42, if Vince Carter struggles to guard Steph Curry, it would be a good idea to reach out to an old teammate of his for advice.  Carter played with Dell Curry, Steph’s dad, for three years in Toronto. 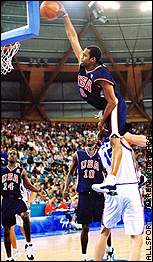 In the 2000 Olympics, Vince Carter threw down one of the greatest dunks of all-time as he leaped completely over Fredrick Weis, the 7’2 center for the French National Team.  The dunk would have gone viral if it wasn’t for one problem.  YouTube wasn’t established until five years later.

7)      The basic principal of coaching in the NBA is to listen to your elders.  Well, hopefully Carter doesn’t get traded to the Celtics, Kings, or Timberwolves, where all the head coaches are younger than Vince.  Fortunately for Atlanta, coach Lloyd Pierce is experienced, wise, and much older than Carter.  He’s 43. 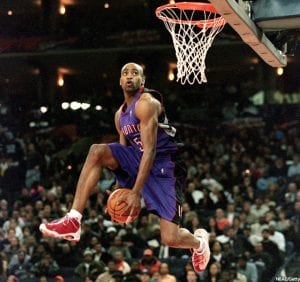 Vince Carter’s next dunk will make him the second oldest player to accomplish the feat in an NBA game (Robert Parish was 43).  Despite limited playing time, Carter should have no problem reaching that goal based on his total of 15 dunks made last season as a 41-year-old.  Ironically, 7-foot Denver Nuggets center, Nikola Jokic, only had 11.

9)      In a league that has become all about analytics, the numbers can sometimes be misleading.  The average age of the Atlanta Hawks starting five was just under 28 years of age, with Vince Carter in the lineup.  The same basic squad without Vince was right at 22. 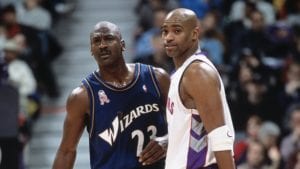 Most kids dream of being the next Lebron James, Kobe Bryant, or Michael Jordan.  Vince has played five more seasons than Lebron, is a year-and-a-half older than Kobe, and once scored 24 points on MJ back in 2001.

Alan Tapley
Alan Tapley is an educator, author, and blogger who has lived just outside of Boulder for the last twenty years.  His published work includes two novels, two children’s books, a series of cartoons in the Minneapolis Star-Tribune, and multiple sports related articles. His love for family and the state of Colorado is only matched by one thing, his passion for sports.  The first baseball game he ever attended was at Wrigley Field, before there were lights.  At the final Bronco game at the old Mile High, he allegedly cut out a piece of his seat in the South stands.  But regardless of being here for the Avalanche’s last Stanley Cup, the Rockies only World Series appearance, and all the Broncos’ Super Bowl Victories, his wife never fails to remind him that he wasn’t at the University of Colorado in 1990, like she was.  The year the Buffs football team won the National Championship.
Tagged: 2000 OlympicsDell CurryDenver NuggetsFredrick WeisJamal MurrayMichael JordanMichael Porter Jr.NBANBA2K20Nikola JokicPepsi CenterSteph CurryVince Carter