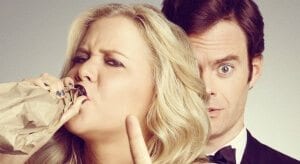 Many people tend to be risk-averse when going to the movies. Sure, people say they want something new and daring, but when movies that are blazingly original, like Snowpiercer, or Memento, or Eternal Sunshine of the Spotless Mind are released, audiences tend to back away slowly, making the sign of the cross.

I get it. Sometimes you want comfort food, cheeseburgers, mashed potatoes, that sort of thing.* But formula doesn’t have to be bad. The enjoyment to be had is in the journey, not the destination. That’s fine, but it doesn’t mean that the formula can’t be tweaked with wit and intelligence.

Different film genres have their tropes. The Cop On The Edge. The Soldier Who Just Cares About His Brothers-In-Arms. One of the hoary old cliches of romantic comedies is The Irresponsible Man-Child Tamed By The Love Of A Good Woman. He eats fast food. He drinks too much. He plays video games. Quelle Horreur! But he meets a completely together woman who, over the course of the film, encourages him to put away childish things. Trainwreck runs with this idea, gender-swaps it, and does so with honesty and style.

The film begins with a flashback that’s simultaneously sad and funny. Nine-year-old Amy (Devin Fabry) and her five-year-old sister Kim (Carla Oudin) are getting a talk from their father, Gordon (Colin Quinn). By way of telling the girls that he’s divorcing their mother, Gordon drills into them his life lesson of “Monogamy isn’t realistic.” We then meet adult Amy (Amy Schumer), a smart, funny, sexual and single woman living in New York. She’s a writer for dudebro magazine S’Nuff, a glossy rag that churns out articles like, “Does garlic change the taste of semen?” She makes good money, lives in a fantastic apartment, and sleeps with many, many, many men. Amy’s got a pseudo-sorta-not really-boyfriend in the charmingly meatheaded Steven (John Cena), but she avoids monogamy like the plague. Why should she embrace it? Her life rocks, and she loves it.

Her grown-up sister Kim (Brie Larson) has avoided their father’s life lesson. Kim has married the dull-but-sweet Tom (Mike Birbiglia), and they’re raising the mildly creepy Allister (Evan Brinkman). When Amy visits them, she’s judged by Kim for not growing up and settling down. But to Amy, the idea of having a doughy husband and a weird kid is a bridge too far.

Amy is assigned to write a profile on Aaron Conners (Bill Hader), a brilliant sports doctor and all-around great guy. He does charity work for Doctors Without Borders, is considerate and kind, and seems to be totally unaware of what an incredible catch he is. They sleep together, and in Amy’s world, that’s the end of that. But, the next day, he calls her! Over time, they fall for each other, and this scares the holy hell out of Amy.

I know, you know where this is going. Amy must learn to overcome her instincts. The couple will fall in love, then fall out of love, then fall in love again. There will be a grand and wildly improbable romantic gesture. You’ve seen this movie before. But you haven’t seen this movie before. Within these regular rom-com trappings is hilarious filth, brutal honesty and a lot of heart. Amy Schumer stars, but more importantly wrote the script. She knows the romantic comedy beats and subverts them in delightfully strange directions.

For example, you know how in romantic comedies the Best Friend exists to offer sage advice and be amusing? Here, the film is stolen by the Best Friend, played by LeBron James. Yes, that LeBron James, the professional basketball player. He plays himself, but he plays a deeply strange, but sweet, version of himself. A version that’s cheap, slightly insane and emotionally invested in Downton Abbey. In a movie stuffed to the gills with scene stealers like Tilda Swinton, Marisa Tomei, and Dave Attell, LeBron simply walks away with it.

As funny as Trainwreck is, it’s also bravely honest at points. The film never slut-shames Amy. We’re never meant to look down upon her because she drinks like a fish and has an active sex life.** Instead, we see her meeting a great guy, but struggling with the lessons of her childhood. Once she starts to really believe that there’s a future with her and Aaron, her gut instinct is to pull the plug on the whole thing. It’s not about Aaron “saving her.” It’s about her moving into a new phase of her life, and trying to do it in the best way possible.

Schumer is ably assisted by director Judd Apatow. Despite the film being 20 or so minutes too long, an Apatow hallmark, it’s still packed with more jokes than any other 5 studio comedies. The guy knows comedy. Also, this is his first film that he hasn’t also written. I’m interested in him collaborating with people like Schumer, people with really strong and distinctive points of view.

So, yes, it’s a romantic comedy. You know where it’s going. But Trainwreck is one that’s smart, witty, and a little bruised. I love that Amy Schumer is willing to go places that most won’t, and that she never sacrifices honesty over taking the easy way. Good for her. We need more like her.

*Having said that, challenge yourself sometimes, for God’s sake. Every time I bring up a foreign film to my wife’s cousin, he replies, “I want to watch a movie, not read it.” He’s a genuinely good guy, but hearing that makes me want to punch him in the face.

Tim Brennan
Tim has been alarmingly enthusiastic about movies ever since childhood. He grew up in Boulder and, foolishly, left Colorado to study Communications in Washington State. Making matters worse, he moved to Connecticut after meeting his too-good-for-him wife. Drawn by the Rockies and a mild climate, he triumphantly returned and settled down back in Boulder County. He's written numerous screenplays, loves hiking, and embarrassed himself in front of Samuel L. Jackson. True story.
Tagged: amy schumerbill haderbrie larsoncolin quinnjudd apatowlebron james