Home » Blog » Movies » Time Is Like a Cold Wind 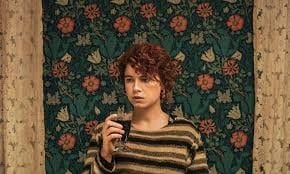 I’m Thinking of Ending Things is streaming on Netflix

The movie isn’t the problem. I’m the problem. Nobody ever said art was easy, right? Making art can be something that goes beyond difficult. It can go to a place that feels like self-flagellation, as if you’re hurling your entire body against a brick wall. All in service for…what, exactly? The slim possibility that your artwork manages to escape into the wild, a viewer sees it and thinks, “Ah, I see what you’re doing. Good work.”

Art is a two-way street. It requires both an artist and a viewer of the art.* I get it, and I’m someone who works both sides of that particular street. On one side, if I’m writing, I understand sweating over a particular turn of phrase. I feel the seemingly endless rewrites to refine the project and shape it into its ideal self. I know the terror of putting in all that time and effort and feeling like it simply isn’t good enough.

On the other side, if I’m writing a review, I’m trying to figure out if what the filmmaker is doing works. Whether it’s worth our time and money, well, those questions don’t matter. Most of the time, when a filmmaker pulls it off, I enjoy the end result. Once in a while I don’t, and that’s very much the case with Charlie Kaufman’s newest film, I’m Thinking of Ending Things.

We meet a young woman (Jessie Buckley), whose name could be Lucy, Lucille, Amy, or possibly Yvonne. She gets into a car driven by Jake (Jesse Plemons). They have been dating for a few weeks, five, maybe six, or maybe far longer or shorter than that. Their plan is to drive to the desolate farm where Jake was raised, and for Jake to introduce the young woman to his parents. 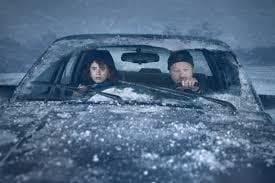 The drive is a long one. We know that as this first scene with the two of them literally runs a little over 17 minutes. Do they mind the length of the journey? Perhaps, though the conversation is wide-ranging. Yet during it, we repeatedly hear her voiceover, saying, “I’m thinking of ending things.” Does that mean a break-up? Does it mean suicide? Does it mean a radical shift in her perspectives? The only thing we do know for sure is that the weather is getting worse.

The drive has a sense of foreboding, and their arrival at the farm doesn’t improve matters. Jake guides her into a barn, shows her the surviving sheep. Some of them have frozen to death, and when she points this out, Jake tells her a story about the family’s pigs becoming infested with maggots. As this happens, a different narrative is intercut, one showing an old man working as a janitor in an empty high school. What’s his connection to the couple?

As the couple enters the house, it’s too quiet for too long. His parents come down the stairs. They’re all smiles when suddenly the young woman finds herself alone at the foot of the stairs, and everyone is waiting for her in the dining room. Mother (Toni Collette) is happy to see her boy, so much so that she edges into hysteria, while Father (David Thewlis) makes quiet asides that are barely understood. 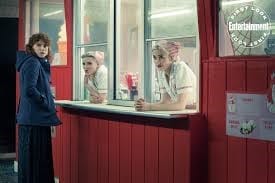 During the dinner, we’ll see them become older, become younger, and edge in and out of dementia. We’ll see the couple leave afterward, and Jake will mention a number of events that the young woman doesn’t remember. As the bad weather gets worse, they’ll stop for ice cream, encounter a group of sinister employees, and one of them warns the young woman about something indescribable and awful. All the while, she continues to think about ending things.

You can be forgiven for reading the preceding paragraphs and reacting with, “The hell is that all about?” Relax, I’m here to help. I’m Thinking of Ending Things was written and directed by Charlie Kaufman, a filmmaker with a profoundly unique voice. Kaufman has exactly zero interest in pandering to “regular” moviegoers, as evidenced by his involvement in films like Being John Malkovich, Eternal Sunshine of the Spotless Mind, and Synecdoche, New York.

As a director, Kaufman seems to have made exactly the film he wanted and made it with precision. His cinematographer Lukasz Zal shoots in a claustrophobic 4:3 aspect ratio, making the screen shape feel tight and focused. So much so that we have to pay attention to what we’re seeing and consider what’s missing. Carefully chosen edits, from an interrupted sentence to the disappearance of a roomful of people, creates a building sense of unease.

Kaufman based his script on the novel of the same name, and while it’s a fairly faithful adaptation,** he allows his idiosyncrasies to come to the forefront. His script focuses on, among other things, how we perceive time and how we try and fail to make connections. It’s positively drenched in dream logic and surrealism. If you treat it like a puzzle to be solved, you’ll come away from it frustrated. The script doesn’t make it easy, with long conversations, poetry recitations, and a moment where a Pauline Kael film review is quoted verbatim. I found that when I relaxed and let it just wash over me, I got the gist of it. At least, I think I did. 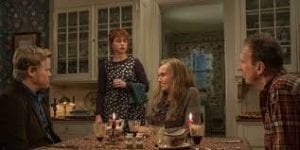 To perform a role in a Kaufman project, you need to be an actor of considerable intelligence, one that can dig through heavy dialogue and seemingly confusing character motivation to bring out something relatable. His cast does outstanding work, and I loved the almost anti-chemistry that Jessie Buckley and Jesse Plemons have as the couple. There’s something severely off about Plemons’ Jake, yet he never plays the character as simply a weirdo or a maniac. There’s a deep wound to Jake, one that never healed as he aged. Buckley does outstanding work as the young woman, and she plays the role with intelligence, humor, and curiosity.

In a just world, Kaufman would receive a few million dollars every couple of years to go off to make something fascinating and stubbornly outside the cinematic mainstream. His work is complex, intelligent, and always funny to a degree. In the end, it doesn’t matter that I didn’t care for I’m Thinking of Ending Things. What matters is that Kaufman made art. He made it his way with skill, intelligence, and no interference from meddling studio executives. How can you not respect that?

*Is it still art if nobody sees it? I didn’t expect to write a Buddhist koan, but there we are.

**Ironic considering the plot of his screenplay Adaptation.

Tim Brennan
Tim has been alarmingly enthusiastic about movies ever since childhood. He grew up in Boulder and, foolishly, left Colorado to study Communications in Washington State. Making matters worse, he moved to Connecticut after meeting his too-good-for-him wife. Drawn by the Rockies and a mild climate, he triumphantly returned and settled down back in Boulder County. He's written numerous screenplays, loves hiking, and embarrassed himself in front of Samuel L. Jackson. True story.
Tagged: charlie kaufmandavid thewlisi’m thinking of ending thingsjesse plemonsjessie buckleytoni colette