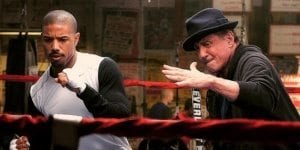 I believe in the concept of parallel universes, alternate dimensions that exist alongside our own. Within these universes, things are largely the same, with a few differences here and there. In one of these universes, a young actor named Sylvester Stallone made some slightly different decisions regarding his budding film career. As a result of his wise choices, he was lauded as one of the greatest actors of his generation, and not, say, as a wildly inconsistent performer content to coast on past victories.

But we do not live in the best of all possible worlds, as our pal Candide would have us believe. Our world is infinitely stranger, where a cretinous tycoon can be a leading presidential candidate, or where people are given access to the sum total of human information and endeavor online, and they use it to post cat videos. Strangest of all, our world has the seventh movie in the venerable Rocky franchise, and not only is it not a total disaster, it’s one of the best films of the year and an honest-to-God Academy Awards contender.

That movie is called Creed, and it would be a good film even if it had no connection to the wider world of Rocky. It’s such a good film that it not only honors the legacy of the original Rocky but even retroactively makes Rocky IV suck less.* It’s a love letter to the highs of the franchise, but it remembers to chart its own path.

We meet young Adonis Johnson in Los Angeles, the product of an affair Apollo Creed had before his death at the hands of Ivan Drago in Rocky IV.  The boy goes by Donnie, and he’s confused, angry, and a hell of a fighter. He spends his time cycling in and out of juvenile hall, seemingly destined for a go-nowhere life. He’s discovered by Mary Anne (Phylicia Rashad), Apollo’s widow, and adopted as her own. Years later, the adult Donnie (Michael B. Jordan) has been raised in luxury and spends his days at a dull finance job. His nights are different, and as a self-taught boxer, he fights and wins in semi-legal matches in Tijuana. Adonis is good and he possesses raw talent, but he’s sloppy and undisciplined. Nobody will train him, and he feels trapped between the drudgery of an office job and the frustration of a boxing career that is over before it’s begun.

As a result, Donnie takes matters into his own hands. He quits his job and journeys to Philadelphia. His best hope is to track down the man who was one of his father’s closest friends and greatest opponents, Rocky Balboa (Stallone), and convince him to become his trainer. Problem is, Rocky’s not interested. He’s not interested in much of anything anymore. His son lives in Canada. His wife Adrian is dead, his friend Paulie is dead. He visits their graves daily, and he runs a small restaurant. He tells Donnie, “I already had my time.” Rocky lives in perpetual exhaustion, and he explains to Donnie that he was in Apollo’s corner in the match that took his life. Returning to the corner of his best friend’s son is not on his to-do list.

Naturally, Donnie wears down Rocky and they begin training. This leads to an offer to fight Pretty Ricky Conlan (Tony Bellew), the world’s top-ranked fighter in his weight class. But there’s a catch. Conlan’s people have discovered who Donnie’s father is and want him to fight under the Creed surname. Along the way, Donnie also falls in love with his neighbor Bianca (Tessa Thompson), a musician who suffers from degenerative hearing loss. She’s just as driven as he is since she wants to create as much music as possible before she goes completely deaf. It’s wonderful to see a role that a lesser film would just treat as the girlfriend, and imbue it with such life and sophistication. Thompson, who was so excellent in Dear White People, creates a fully three-dimensional character that could easily be the star of her own movie.

That’s only one of the many things to love about Creed. Director Ryan Coogler, who previously worked with Michael B. Jordan in Fruitvale Station, has made a deeply exciting and deeply emotional film. He understands that the real theme of the Rocky films is about loss and how people cope with it. Donnie lost the chance to have a relationship with his father. Rocky lost the people in his world that meant the most to him. Coogler shows us these people battered by life’s punches who continue to get back up. Along with his co-writer Aaron Covington,** Coogler has written a perceptive and entertaining screenplay. It doesn’t hurt that he can back it up by being a hell of a director. He uses long takes, clean and close-up camera work, and scenes that are edited with great precision. There’s a boxing match midway through the film that’s shot in a single take. It doesn’t call attention to itself, but it’s a bold choice Coogler makes. He’s quickly becoming one of the great American filmmakers.

Michael B. Jordan is becoming one of the great American actors. You probably first saw him in Chronicle or The Wire. For all of our sakes, you hopefully did not see him in Fantastic Four. The stench of that misbegotten film has washed off him, and he radiates megawatt star power here. As Donnie, he’s driven, despairing, sweet, confused and cocky. Donnie is innately likable, and we want to see him succeed, particularly when he doesn’t want to become rich or famous, but just to prove that he deserves to live up to the Creed name.

For years, Stallone’s career had been in decline. 2006 proved to be an interesting year for him with the release of Rocky Balboa. He followed that up with Rambo*** and The Expendables, clearly mining past hits. For years, he seemed like John Travolta, a great actor who has the superpower of making terrible decisions. Creed reverses that decline, and Stallone delivers a performance that is honestly Oscar worthy. He plays a man that’s marking time until his death, who has no real reason to go on. The arrival of Donnie gives him a reason, and we see real life coming back to Stallone’s craggy features.

We’re lucky to have Creed. With most franchises, the seventh installment wouldn’t even be in theaters, much less worth a damn. It wouldn’t be this smart, this sophisticated, this triumphant. It’s one of the best of the year. Go see it.

*But not much less. Rocky IV is still terrible, mostly because it’s a feature-length montage sequence, with a couple of regular scenes of narrative thrown in.

**This is the first Rocky movie where Stallone has not been involved with the screenplay.

***Say what you will about Stallone, but the original First Blood is a rock-solid film.

Tim Brennan
Tim has been alarmingly enthusiastic about movies ever since childhood. He grew up in Boulder and, foolishly, left Colorado to study Communications in Washington State. Making matters worse, he moved to Connecticut after meeting his too-good-for-him wife. Drawn by the Rockies and a mild climate, he triumphantly returned and settled down back in Boulder County. He's written numerous screenplays, loves hiking, and embarrassed himself in front of Samuel L. Jackson. True story.
Tagged: aaron covingtonmichael b. jordanphylicia rashadryan cooglersylvester stallonetessa thompsontony bellew