The Subtext Has Become Text 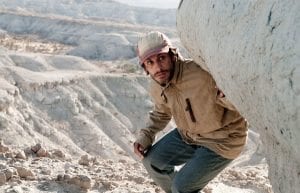 Some of them made the crossing to reunite with family. Some wanted a decent job. Some believed in the promise of America, while others wanted to get the hell away from the cartels. But applying for immigration, whether it was because of time or money, simply wasn’t a realistic option. Phone calls and desperate pleas were made to the coyotes, and they began the risky journey from Mexico to the United States.

They’re called undocumented immigrants, illegal aliens, and names unfit for print. There’s a lot of talk about them, especially now, in an election year. Most people have strong opinions about them, and those opinions vary between compassionate understanding all the way to outright loathing.

The journey that they take and the way these people take it is undeniably cinematic. There are a number of ways you could make a movie about them, from subtle to obvious. Jonas Cuaron saw the potential and made a film called Desierto about them.

We’re introduced to Moises (Gael Garcia Bernal), a man jammed into the back of a pickup.* He’s part of a group of people, maybe a dozen, who have paid three border smugglers, or coyotes, to take them across the U.S./Mexico border. I get the feeling these journeys never go smoothly, and this one is no exception. The truck breaks down in an arid salt flat, not far from the badlands. Moises is a mechanic. He takes a look at the engine, but it cannot be fixed. It’s decided that one of the coyotes will stay with the truck, while the other two will lead the group across the border on foot.

It’s bad enough that the group has to travel across the brutally hot desert on foot. Things get even worse when Moises and a few other stragglers get left behind by the main group. Among them is Adela (Alondra Hidalgo), a young woman who has left her village that has, I assume, fallen under cartel control. Moises, Adela, and the others are far enough behind to safely witness the arrival of a truck. They initially think the driver is a Border Patrol agent. It’s actually Sam (Jeffrey Dean Morgan), a serial killer toting a sniper rifle and accompanied by his faithful German Shepherd Tracker.

Sam sets himself up on a sun-blasted rock, takes a drag from his cigarette, and proceeds to open fire. He coolly guns down the larger group, then sits back, satisfied. That might have been the end of it, but one of the people in Moises’ band panics and runs for it. Now Moises must try to survive the unforgiving desert and the madman hunting him, while his small group is relentlessly picked off.

Perhaps this concept sounds a little familiar to you. Yep, it’s the old riff of “Man is the most dangerous game,” only with an overlaid patina of current events to make it feel more relevant. Fine, I have no problem with that. I have even less problem with the fact that it’s set in the desert, a place that is harsh and unforgiving, which automatically makes every shot feel more dramatic. This is Cuaron’s first feature-length film and, given that his old man is Alfonso Cuaron, one of the world’s most talented directors, you’d expect him to learn a thing or two. He’s a sharp filmmaker, and I love his constant contrasts of the tiny characters against a massive and indifferent landscape.

When I hear about the plot of Desierto, I anticipate it being one of my favorite things, that being a nasty little b-movie with a social conscience. Something that’s a combination of sleazy thrills and an exploitation of whatever neurosis is currently plaguing the country. The Purge films scratched that itch nicely; Desierto doesn’t quite get there. Maybe I’m unreasonable. Maybe I expect too much. Things like character development. I’ll explain.

The character of Moises has crossed the border before. He has a wife and son in Oakland, he was deported back to Mexico, and now he’s making his way back to them. You’ve seen Gael Garcia Bernal before, most likely. He’s a prolific and skilled performer, and we can see that with films like Y Tu Mama Tambien and The Motorcycle Diaries. Despite having a character that’s mot much more than some broad brush strokes, Bernal is solid here. With his expressive eyes, we can tell what he’s thinking and feeling at any given moment. So far, so good.

Then there’s the rest of the cast. Literally none of the other undocs* are fleshed out. They’re just a terrified mass of humanity acting as cannon fodder for Sam. Speaking of Sam, it helps that Jeffrey Dean Morgan is playing him. You might remember Morgan played a violent maniac in Watchmen, a violent maniac on The Walking Dead, and a violent maniac here. He’s a very talented actor with a wide range, but when you put him in a stained tank-top and hand him a rifle, he looks dangerous. When you take him, looking like that, and put him in a big-assed truck with a Confederate flag and a “Don’t Tread on Me” sticker, you have instant right-wing wacko.

Makes sense, but why does Sam love killing undocs? Did he go to a few too many Trump rallies and he’s afraid of them overrunning the country? Did one of them harm a loved one? Is he just generically crazy? The script, by Cuaron and Mateo Garcia, never tells us. It is full of thuddingly obvious symbolism, like the names of the protagonist and antagonist. We never really get inside the heads of our characters, and that’s a real missed opportunity, especially for a film about this particular subject matter.

There’s not a lot of competition at the theaters this weekend for new films. You basically have Ben Affleck as an autistic tough guy in The Accountant, the utterly disposable toy commercial masquerading as a movie Max Steel, and Desierto. I like Affleck; he doesn’t need your help. Despite its total lack of nuance, Desierto is a pretty good little thriller. Give it a shot.

*It also bears mentioning that he’s dressed exactly like Ash from the Pokemon cartoon. There’s a parallel to be drawn there, but I fear I’m not smart enough to draw it.

*Undocumented immigrants takes too long for me to repeatedly type. I’m sorry your humble critic is a lazy man.

Tim Brennan
Tim has been alarmingly enthusiastic about movies ever since childhood. He grew up in Boulder and, foolishly, left Colorado to study Communications in Washington State. Making matters worse, he moved to Connecticut after meeting his too-good-for-him wife. Drawn by the Rockies and a mild climate, he triumphantly returned and settled down back in Boulder County. He's written numerous screenplays, loves hiking, and embarrassed himself in front of Samuel L. Jackson. True story.
Tagged: alondra hidalgogael garcia bernaljeffrey dean morganjonas cuaronmateo garcia