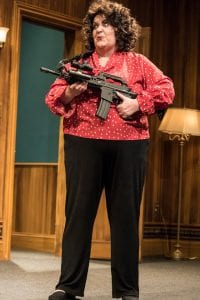 “A story doesn’t have to be real to be true.” One of the opening lines of Kyle John Schmidt’s new play The Secretary could just as easily be flipped around to say, “A true story has many realities.” A dark and darkly funny new play at the Curious Theatre dives deep into the twisted and conflicting meanings of guns in America and how we all are related to the violence and power that they bestow upon us.

The scenario is this: a small town, probably in the South or Midwest, based on the characters’ accents, is slowly dying from economic starvation. The only real moneymaker in town is the local gun manufacturer, run by a widow named Ruby, as played by Kathleen M. Brady, a reasonable facsimile of Ann Richards. The town depends on her economic engine to stave off the post-industrial decline of the modern Heartland. When a shooting happens in the town, the residents trickle into Ruby’s office for various needs that only she can meet. Among those is Shirley (Leslie O’Carroll), the local high school secretary and the person who is the actual shooter, who is both arguably and dubiously guilty; Brandy (Karen Slack), the mother of the slain, in possession of tragic bereavement and practical necessity; April (Adeline Mann), the young woman who had escaped the town’s malaise, but has been driven back by the harsh hand of the larger world; Janelle (Devon James), the absent-minded office manager and half-sister to April; and Lorrie (Emma Messenger, the regional answer to Melissa McCarthy). It’s no accident that all the characters in this play are women. (The only named male characters are a shooting victim and a decrepit repairman, neither of which we ever see.) So often, “women” are given as the reason to own guns (“protect your family” rarely means “protect your 36-year-old son”), but women are rarely given voice to discuss the violence done to them and their children by those same guns. Playwright Schmidt has given us a story that opens that discussion.

There’s a lot to unpack (unload? har har!) in this play about the economics of guns. Guns are big business. Tax revenues have been so catastrophically gutted in some Midwestern states (I’m looking at you, Kansas) that basic amenities for civic institutions have to come from the tax-break-motivated “gifts” of capitalist “philanthropists.” Now, I’m sure some folks, of the type that Ruby seems to represent, genuinely want to give back to their communities. But there’s something here to say about needing school funding to rely on private donations rather than public coffers. When those private donations come from the fear and violence sold by gunmakers, how should we feel about their *tainted* lucre? Can good things come from bad things? The Sackler family gave us the opioid crisis, but they’ve also sponsored some nice art exhibits. 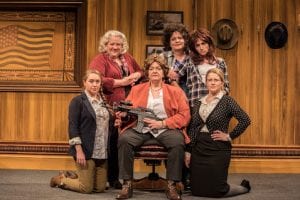 The economics of guns can’t be divorced from the idea of the power that a gun grants an individual. As money and jobs drain out of vast regions of the country, as racial demographics drift away from those who have been accustomed to power…guns can start to seem like the best way to rebalance the lives of those who feel bereft and confused. There’s an old, unattributed quote in the American vernacular: “God made all men; Sam Colt made them equal.” The Freudian and phallic symbolism of guns lands firmly on the idea of male power.

When women hold guns, they can wield the same physical threat to others than men’s larger and stronger bodies inherently possess. It’s a tantalizing temptation. When you no longer have the power of having money, you feel the need to seek out some other kind of power. Holding a gun gives you that. It’s intoxicating. Does it change you? Schmidt says “Yes.” The characters hold guns and do things that they would never do without them.

All the characters in this play are deeply intimate with each other. It’s a small town. They’ve known each other for decades. They know each other’s histories and hurts. There’s the strange intimacy of the relationship between the killer and the killed. Their lives become even more intertwined as they fall under the thrall of Ruby’s product—resulting in both tragedy and perhaps the prevention of more tragedy?

Here is the part where I offer unsolicited advice to the builders of this piece. The play itself is delightfully written and (tiny spoilers alert!) I am sure that the playwright is not unaware of the silent joke he has given us on the idea of “Chekov’s gun.” We see the guns, but never actually hear one fired. I found this to be hilarious. The scene changes are voiced over by gun advertisements, including a holster for use while sitting on the toilet, called the “Toilet Holster.” Why did Schmidt not cash in on the opportunity to call this, “The Magazine”?! 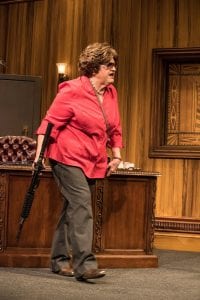 I loved the characters in this play. I found them totally relatable, very much in the vein the friends and family of my rural upbringing. The women working as secretaries in their fifties, with “disabled” husbands who maybe aren’t disabled but just can’t find work. The woman who leaves her office with both a loaded weapon and a purse full of mints and Kleenex. I particularly enjoyed Emma Messenger and Kathleen M. Brady’s performances and their chemistry together. The writing itself is also gorgeous: the names of the models of guns are both hilarious and totally believable. The lyrical and memorable quotes that come from the mouths of the characters are cringe-worthy in their truth (“A gun is a law that you hold in your hands.” “Use whatever story you want to sell whatever story you want.”) The dead boy is named Dustin or Dusty, depending on who is referring to him, an elegant bit of wordplay that reminds of me Jake Gyllenhaal’s character in Nightcrawler. The summary of the whole play is in the phrase “The gun did it.”

And that’s the story we all wrestle with, isn’t it? Did the gun do it? Is it the guns that kill people or is it the people who have the guns? Which story are we using to sell what? Whose story is the *real* one? That’s a question that can’t be answered in 90 minutes, but the perfect ending of this play leaves me it in the front of my mind.

I found this play wonderful and frightening. Don’t miss it. Tickets are on sale now.

Jessie Hanson
Jessie Hanson lives and works in Denver and couldn't be happier about it. Like the best-possible kind of Jekyl-and-Hyde scenario, she splits her life between science and storytelling. During the day, she performs clinical diagnostics and messes around with test tubes. At night, she performs behind the mic as a standup comedienne, in the air as a circus aerialist, and in rhinestones as burlesque dancer. She begrudges the hyper-inflated cost of a decent pair of false eyelashes. When she's not on stage, she sweating it out as an endurance athlete in triathlons and marathons across the West. She begrudges the hyper-inflated cost of a decent pair of running shoes. She's thrilled to be on board with OnDenver and writing about science, comedy, circus, athletics, and general fun on the Front Range!
Tagged: comedygun controlgunstheater