The Secret Ingredient for the Best Bagel Shop in Denver 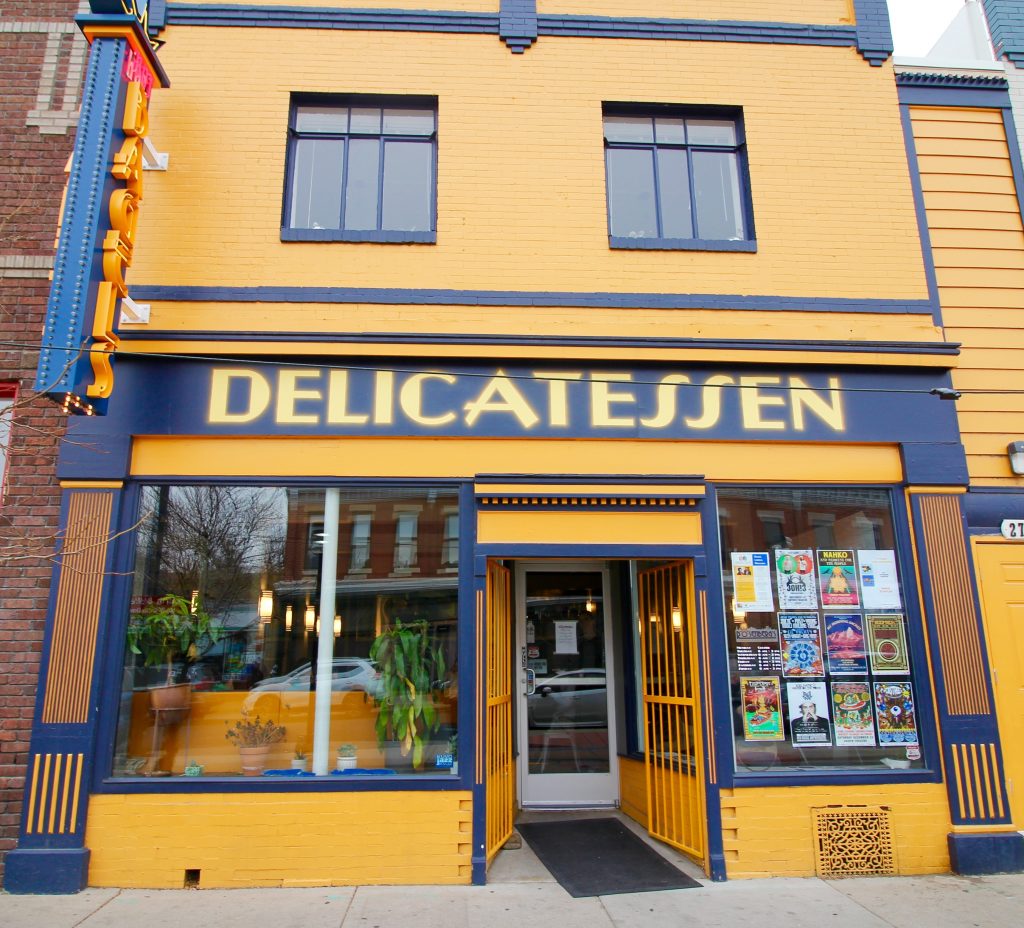 There is a real crisis going on west of the East Coast. Bagels…or the lack thereof. Let’s be honest, there really aren’t many places in the U.S. that are outside of New York and New Jersey that can do bagels right. They just aren’t the same anywhere else. And why is that? Some say it’s the ingredients or the way the bagel is made, which is accurate to some degree, but a lot of it is down to the water! For the more science minded people, there are certain minerals in the water in the New York region that react with the gluten to give the bagels a more dense and gooey structure. As opposed to other bagels everywhere else that tend to be harder with more airy gluten structures. For the the rest of us, the bagels are chewier, more flavorful, and just all around really freaking good. So, where can you get a bagel that good out west? The answer, Rosenberg’s Bagels.

Once again my journey took me to the corner of E 26th Ave. and Welton St. in the historic Five Points neighborhood. The first time I went to Rosenberg’s was on a Sunday afternoon around 1pm. I walked in, and could immediately tell this was an authentic New York style deli. Simple, quick, and loud. Families and friends were congregating at the tables enjoying their meals, while about twenty hungry looking people were lined up waiting to order. This was definitely a well known place that locals and people from all around the Denver area came to enjoy their morning bagels.

I walked over to the deli counter and admired the decent sized selection of bagels staring back at me waiting to be consumed. The menu was very extensive as well, ranging from all kinds of meat sandwiches, variations of egg and cheese, and of course the classic lox bagel. As I waited I watched the men and women in the kitchen shouting orders at each other and hurrying around in the true New York Deli fashion. I felt like they really nailed the atmosphere, so I hoped they would nail the bagels as well.

I ordered “Veggin Out”: *Roasted garlic hummus, cucumber, lettuce, tomato, onion, roasted red pepper, and avocado on an everything bagel* 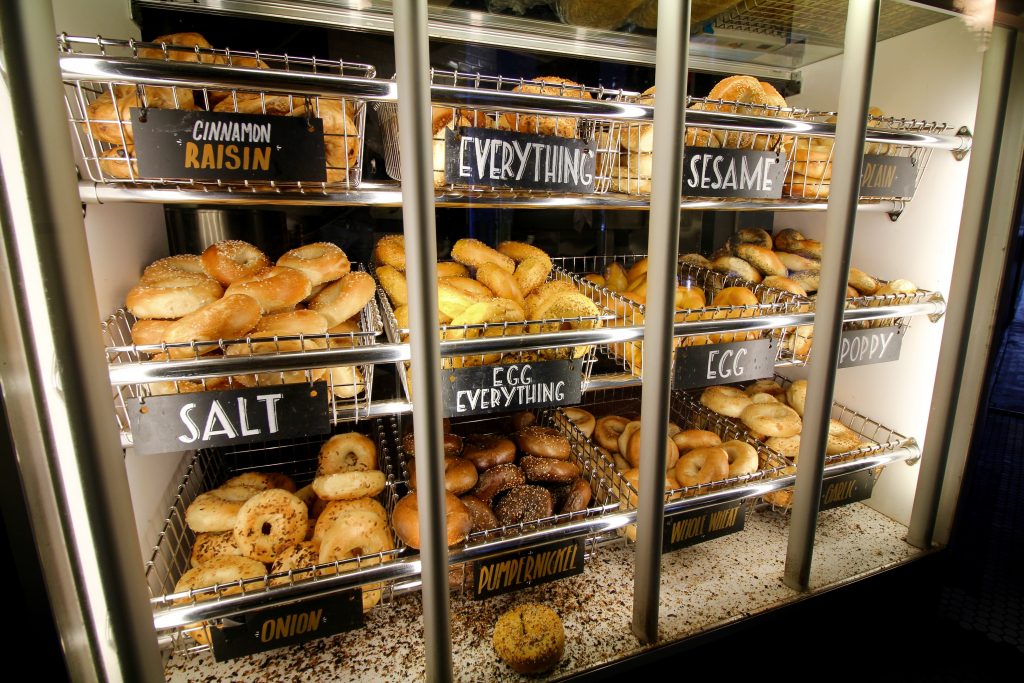 I bit into the bagel, the anticipation rising, and was pleasantly surprised at how spot on it was. It was perfectly toasted with a nice crunch on top, accompanied by a good balance of chewiness from the inside of the bagel. I could have done with a little bit more intensity of the crunch and chewiness, but that’s just how I prefer my bagels. Other than that, the flavor of the everything bagel was great. Sometimes people can make everything bagels with too much garlic or salt, taking away from the flavor of the rest of the ingredients. It’s also common for people to sprinkle the toppings on sparingly. This bagel however, had a solid amount of everything…just how it should be. The innards of the sandwich were also really good, very fresh tasting, and the combination of flavors went well together. The roasted garlic hummus wasn’t too overpowering, and the avocado added a nice bit of creamy spread to seal all of the veggies together.

My Mom said her sandwich overall was, “Really good, not amazing, but really good”. She also mentioned that the Gravlax had really good flavor, and everything went together well with the bagel that she chose. It’s easy to make “decent” Gravlax, but getting it cured just right without making it all too salty is a skill, one that Rosenberg’s has done well. 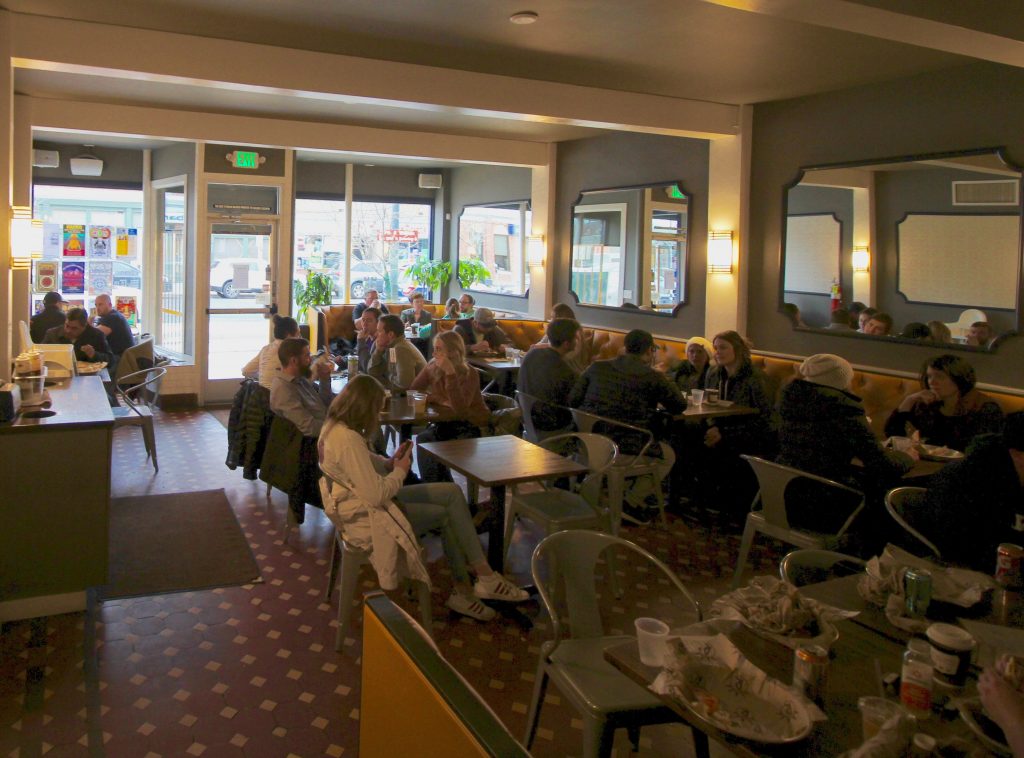 A sandwich by any other name would just be a sandwich, which is why the bagel in this instance is such an important ingredient that cannot be done lackadaisically. The whole reason these bagels in particular are of such good quality over any other ones i’ve tried so far, is because of…you guessed it…the water. The creator of this deli, Joshua Pollack (a New York area native), didn’t want to just ship in water from New York, because that would be too easy. No, he goes so far as to actually make his own water to match the mineral structure of his home state’s. This gives him the ability to have a real New York style bagel all the way across the Mississippi, in Denver. Now that’s dedication and love.

The place: Rosenberg’s-Bagels and Delicatessen