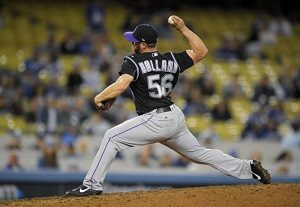 I sat at my laptop looking at all the stats, all the numbers, all the scenarios, and asked myself just why are these Colorado Rockies so much better than last year? At 64-48, 16 games over .500 and charging towards a playoff spot, I was determined to figure out the answer by looking at hitting, pitching, injuries, and even the manager. Finally, it all became clear. The answer was Greg Holland.

1) It was difficult not to credit the powerful Colorado bats as the major factor in the Rockies turn-around from last year’s 75-87 record. Charlie Blackmon, Nolan Arenado, and DJ LeMahieu have been fantastic all year. Mark Reynolds has 23 homers, Gerado Para is hitting .355, and Colorado leads the NL in hitting with a .276 batting average. But the Rockies lead the NL last year in hitting with a .275 batting average, Arenado hit 41 HRs and drove in 133, Blackmon hit .324 with 29 HRs, LeMahieu hit .348, and Carlos Gonzalez and Trevor Story weren’t MIA.

2) The performance of our young starting pitchers seemed like an obvious place to look at next as Kyle Freeland, German Marquez, Jeff Hoffman, and Antonio Senzatela have really stepped up. The four pitchers have combined to win 36 games as their ace, Jon Gray, missed a majority of the season. But only Freeland has an ERA under 4.00 and the Rockies as a team still have an ERA of 4.69. A small improvement over 2016, but only 12th out of 15 teams in the NL.

3) The wear and tear of a long season can take its toll, and a few key injuries can derail any playoff intensions. While it feels like the Rockies were relatively healthy all season as Arenado, Blackmon, and LeMahieu were penciled in each day, Jon Gray missed most the season, and Ian Desmond, and a few other pitchers spent time on the shelf. Trevor Story (.227 batting average) and Cargo (.228 with 7 HRs) may not have been injured, but they are sure hitting like they were.

4) Bud Black could be the answer. He’s bound to get some votes for Manager-of-the-Year with the Rockies becoming playoff contenders. The way Black has handled the young pitching staff while improving the Rockies road record to above .500 at 29-27 is a vast improvement on last year’s Walt Weiss lead team. But Bud Black’s career record is only 713-761 as a manager. While I think he’s been great, the numbers suggest he isn’t the reason.

5) The answer is Greg Holland. The right-handed closer has converted 34 out of 36 save opportunities while posting an ERA of 1.96. The league is batting .182 against him in 43 games. In 2016, Colorado blew 31 save opportunities as their closer-by-committee included Jake McGee (15 saves, 4 blown saves, ERA 4.73) and Carlos Estevez (11 saves, 7 blown saves, ERA 5.24). Holland needs three more saves in the next 50 games to match the entire team total of last year’s Rockies. Closing games, especially close ones, is so vital to winning as last year the Rockies were 12-20 in one run games, this year they are 14-7.

Baseball is a team sport, but the acquisition of Holland has turned a perennial .500 baseball club into a magical playoff contender.

Alan Tapley
Alan Tapley is an educator, author, and blogger who has lived just outside of Boulder for the last twenty years.  His published work includes two novels, two children’s books, a series of cartoons in the Minneapolis Star-Tribune, and multiple sports related articles. His love for family and the state of Colorado is only matched by one thing, his passion for sports.  The first baseball game he ever attended was at Wrigley Field, before there were lights.  At the final Bronco game at the old Mile High, he allegedly cut out a piece of his seat in the South stands.  But regardless of being here for the Avalanche’s last Stanley Cup, the Rockies only World Series appearance, and all the Broncos’ Super Bowl Victories, his wife never fails to remind him that he wasn’t at the University of Colorado in 1990, like she was.  The year the Buffs football team won the National Championship.
Tagged: Bud BlackCarlos GonzalezCharlie BlackmonColorado RockiesGreg HollandJon GrayKyle FreelandMLBNolan ArenadoTrevor Story