You know what my problem with romantic comedies has often been? They’re neither romantic enough nor comedic enough. Is the base problem simply that I’m a straight white guy, someone who gets his cinematic pleasures from seeing people shot in the face repeatedly? Do I simply need to accept that rom-coms are made by and for women, and shut my stupid face? 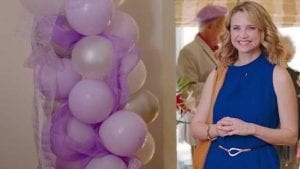 Well…no, I wouldn’t put it quite like that. Remember the old cliché of a straight couple fighting over which movie to watch? The female half wins, naturally having chosen a rom-com, and as she sighs heartily at the onscreen shenanigans, her beau searches frantically for an escape route or a conveniently placed suicide pill. Yeah, that cliché needs to go the way of the dinosaurs.

Done well, a rom-com can and should be a wonderful experience for everyone. If you’re in the mood for a classic, The Princess Bride is unquestionably a rom-com, and it’s unquestionably perfect. Looking for a rom-com with more literary trappings? I give you the charming Much Ado About Nothing.* Feeling like something that’s on the raunchy side of things? Check out The 40-Year-Old Virgin. An argument could even be made that when you strip away the philosophical trappings, Groundhog Day is a rom-com for people too crusty to admit they like rom-coms.

The problem is, rom-coms are very, very difficult to execute. Get too raunchy and you’ll turn off a segment of the audience. Get too saccharine and the folks showing up for laughs will peace out. As a result, the vast majority of rom-coms opt for a middle of the road approach, while the gutsier ones smuggle in a little something extra. Surprise Me!, the new film from writer/director Nancy Goodman, feels like more of the same, but it’s got a unique subplot that deserves your attention. 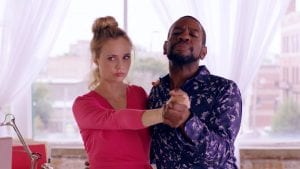 We’re introduced to Genie Burns (Fiona Gubelmann), the owner of Surprise Enterprise. She specializes in surprise parties, ones that are carefully curated for the individuals involved. If your parents are coming up on an important anniversary, or your best friend needs a birthday celebration like no other, you call Genie.** Along with her partner Steven (LaShawn Banks), their job is creating moments that are simply unforgettable.

As you might imagine, doing that ain’t easy. Genie needs to cover all the details, and as a result, she’s not a big fan of surprises. But before you start thinking this is another “uptight career woman needs to learn to live, and a hunky dude*** is just the one to teach her,” you can pump the brakes, Sparky. As a young girl, Genie experienced some serious trauma. Surprises are just another reminder of the universe’s random cruelty, and she can do without them.

So how does she cope? By making her world as predictable as possible. Steven is gay, so there’s never a concern about keeping things platonic. Speaking of which, Danny (Jonathan Bennett) is an old friend of Genie’s from college. While sparks are there between them, she’s taken steps to ensure nothing complicates their relationship. 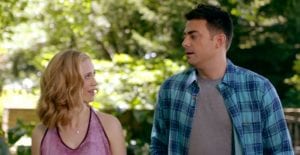 When it comes to relationships, Genie has become an expert in extricating herself from them before they get too serious. That is until she meets the slightly-too-pushy Jeff (Sean Faris). It helps that he’s a good-looking guy with a decent job and no overt mental health issues. Is he the one? Can she make the changes she needs in her life? Will Genie and Steven successfully pull off a tricky project for a big-shot client?

Here’s the thing about Surprise Me—it wants you to love it. Nancy Goodman has made a movie that looks and feels like a Pottery Barn catalog, with lots of warm lighting, comfortable spaces, and pacing that’s content to take its time. Weirdly, the film has something in common with Quentin Tarantino’s Once Upon a Time…in Hollywood. Neither one has a plot where a person must do a thing. Instead, both are content to sit back and watch the characters, and both do so in their own idiosyncratic ways.

Goodman also wrote the script, and it’s very much a good news/bad news scenario. The bad news is that the exterior of the script is Rom-Com 101. We have a gay best friend who’s sassy. We have lots of jokes that are rarely funny. We have characters telling us things when the script should be showing them, and we have characters behaving inconsistently due to the needs of the screenplay.

The good news? Goodman spends a fair amount of time on a subplot involving Genie grappling with emotional eating. When she’s triggered by a moment or dealing with stress, she eats. A lot. Here, Goodman takes the time to drill down into Genie’s psychology. We see why she does it, how food is a source of comfort, and what she can do to work the problem in a healthy way. Not only did I find it fascinating, but also Goodman writes the subplot authoritatively. She’s a strong writer, but too often she leans on rom-com tropes that were tiresome in the 1990s. If her next project has more of that emotional honesty, she’ll become a force to be reckoned with.

The cast is fine, with a couple of standouts. As Genie, Fiona Gubelmann carries the entire film and makes it look easy. She’s likable, charismatic, and can handle bigger emotional moments when needed. I’d like to see her work with Goodman again, and I’d really like to see her dig into material with some bite. Her best scenes are therapy sessions with Ellen (Nicole Sullivan). Along with Goodman’s directing, Sullivan does something very clever here. On first glance, Ellen seems to be your standard-issue “wacky therapist,” making jokes that would put out Hannibal Lecter. Look a little closer, and you’ll see that Ellen uses her goofballery as another therapeutic tool. I love roles where actors play characters that are called upon to act. Sullivan has fun with the role, and she has the skill to shift gears very quickly.

If you’re looking for a reasonably good time at the movies, you could do a lot worse than Surprise Me. The really surprising aspect of the film is that when you get to the center of this cinematic Tootsie-Roll pop, you’ll find some compelling psychological drama and strong character work. While it didn’t light me on fire, I’m very curious to see what Nancy Goodman and her team does next.

*Though you’ll have to get through a legendarily bad Keanu Reeves performance. Not for nothing, but why in God’s name would you hire Keanu to do Shakespeare?

**You have to give her credit for finding a niche in the business world and running with it.

***Sorry, I realize nobody uses the phrase “hunky” any longer. Believe me, if I’d written “thicc” instead, it would have been even more embarrassing for both of us.

Tim Brennan
Tim has been alarmingly enthusiastic about movies ever since childhood. He grew up in Boulder and, foolishly, left Colorado to study Communications in Washington State. Making matters worse, he moved to Connecticut after meeting his too-good-for-him wife. Drawn by the Rockies and a mild climate, he triumphantly returned and settled down back in Boulder County. He's written numerous screenplays, loves hiking, and embarrassed himself in front of Samuel L. Jackson. True story.
Tagged: fiona gubelmannjonathan bennettlashawn banksnancy goodmannicole sullivansean farissurprise me