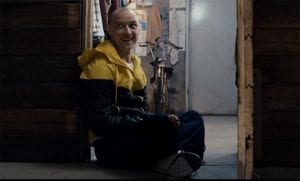 When I was in high school and college, I fancied myself a bit of an actor. During that time, I learned two things.

So I learned acting wasn’t really one of my skill sets. Instead, I found other talents and focused on them, to my happiness. Our boy M. Night Shyamalan was in the same boat. He made The Sixth Sense, Unbreakable, and Signs, all very good movies. Then people, lots of people, started calling him the next Spielberg. Foolishly, he believed them, and he set out to show the world that he could combine fantasy with a probing look at the human condition. It didn’t work out too well since he proceeded to make 5 more films that ranged from “terrible” to “awful.”

For a while there, it looked as if Shyamalan’s career as a filmmaker was over. It’s okay to have hubris in Hollywood, you just need the talent to back it up. But in 2015, he made The Visit, an entertaining and fun horror movie about insane senior citizens. Were the rumors true? Was Shyamalan really mounting a for-realsies comeback? His newest film, Split, suggests that, and it also suggests he learned a valuable lesson.

We’re introduced to high schooler Casey (Anya Taylor-Joy), attending a birthday party at the mall. She’s quiet, withdrawn, and intelligent. She knows that Claire (Haley Lu Richardson) invited her out of pity. Casey’s clearly having a bad day, but it gets worse. She, Claire, and Marcia (Jessica Sula) are efficiently abducted from the mall parking lot. They awaken in an underground lair. But who has done this?

The girls meet their captor. This is Kevin (James McAvoy). Sometimes. Other times he’s the proper Patricia…or the goofy 9-year-old Hedwig…or the take-charge Dennis…or the fashion forward Barry. Kevin has dissociative identity disorder, which used to be called multiple personality disorder. He’s got 23 distinct personalities, all with their own thoughts, voices, non-verbal tics. Each personality has a turn in “the light,” and has dominance over Kevin’s physical body for a time. But, as with all groups, there are disagreements.

A 24th personality, ominously known as The Beast, may be emerging with the help of Patricia, Dennis, and Hedwig. They have plans for the girls. We learn more about Kevin’s complex mental state from his therapist. Dr. Fletcher (Betty Buckley) is compassionate, canny, and smart.* She has a theory that DID isn’t a mental illness, but it’s actually a means of unlocking the potential of the body and mind. One of Kevin’s personalities is clearly sounding the alarm by emailing Dr. Fletcher to set up emergency therapy sessions. The good doctor must get to the bottom of her client’s issues,** while the girls must figure out a way to fight back and escape.

If you’re any kind of film nerd, you know there are certain things you’ll get with an M. Night Shyamalan joint. You can expect dialogue that’s a little bit wooden, expertly paced scenes of suspense and some kind of a “gotcha” at the end.  You have all of that here, sort of. Shyamalan still needs help with making his characters a little less ponderous, but he’s getting better as a writer. Like The Visit, there are scenes here that are genuinely funny. There’s also a recurring theme about childhood trauma creating damaged adults, and Shyamalan shows the effects of this on Casey and Kevin through efficient flashbacks.

He’s also getting his mojo back as a director, with one important change. Split has terrific pacing and feels extremely confident. It also feels a little sleazy and a little exploitative. On the one hand, Shyamalan seems to have found a niche as an auteur of mid-budget thrillers. There’s a place in the cinematic landscape for feature-length Twilight Zone episodes, proven by last year’s excellent 10 Cloverfield Lane. If Shyamalan stays in his newfound comfort zone and cranks out well-made and modest horror movies mixing grime, stupidity, and competence, I’m all for it.

On the other hand…yeah, it’s kinda sleazy. Shyamalan wastes no time in putting Richardson and Sula’s characters into minimum amounts of clothing. I get it, ogling comely teens is one of the foundations of American cinema. More troubling is Shyamalan’s approach to mental illness. My good friend Devila joined me for the film. She’s a mental health professional with two decades of experience under her belt, so she knows a thing or two about a thing or two. She informed me that, while Shyamalan’s portrayal of how DID operates was perhaps 25% accurate, it was unsettling how the film seemed to suggest that the mentally ill are inherently dangerous. While I’m sure Shyamalan didn’t intend that, the impression can’t help but linger.

Yet, the film has some powerhouse performances to recommend it. Some of the best scenes involve interactions between Kevin and Dr. Fletcher. It’s always nice to see a competent professional in a movie, and it’s even nicer to see a therapist who isn’t secretly manipulative, evil, a cannibal, or all of the above. Buckley shows us a woman who is ambitious but maintains an endless reservoir of compassion.

While Richardson and Sula don’t do much beyond looking frightened in their underwear, Anya Taylor-Joy continues to prove that she’s an undeniable talent. Just like in last year’s excellent The Witch, she provides her characters with intelligence and empathy. Better yet, she’s comfortable with stillness. It’s not an easy thing, but she’s able to communicate a great deal without seeming to do much at all.

Her minimalism is a great counterpoint to McAvoy’s more theatrical performance. Believe me, I don’t mean that as a criticism as his work here is absolutely transcendent. He needs to show us multiple personalities, sometimes within the same scene, and he does so in large and small ways. He’s alternately funny, dramatic, heartbreaking, and creepy. McAvoy is an actor that always goes for it, whether he’s playing Charles Xavier in the X-Men blockbusters, or in independent films like The Last King of Scotland. His work here is fearless, and if there were any justice in this cruel world, it would be the stuff of awards.

While Split isn’t exactly a thoughtful look at the struggle of a man plagued by mental illness, it’s not really trying to be that. It sets out to be an entertaining genre exercise and a fun time at the movies, and it succeeds. I’m hoping that the presumed success of this film, combined with some hard-won humility, gives us a better Shyamalan. He doesn’t need to be the next Spielberg. Being the first M. Night Shyamalan is certainly good enough.

*Yet she appears to see clients in her home, so maybe she’s not that smart.

** Kevin doesn’t have issues, he has subscriptions.

Tim Brennan
Tim has been alarmingly enthusiastic about movies ever since childhood. He grew up in Boulder and, foolishly, left Colorado to study Communications in Washington State. Making matters worse, he moved to Connecticut after meeting his too-good-for-him wife. Drawn by the Rockies and a mild climate, he triumphantly returned and settled down back in Boulder County. He's written numerous screenplays, loves hiking, and embarrassed himself in front of Samuel L. Jackson. True story.
Tagged: anya taylor-joybetty buckleyhaley lu richardsonjames mcavoyjessica sulam night shyamalansplit