The Cat Came Back

Zana died early in the morning. She was an Abyssinian, a breed of cat known for their small bodies and hilariously large ears. Our family has had mostly good luck with long-lived pets, and Zana was no exception. She made it to 17 years old, and even in the last years of her life when she committed to being a cranky old lady, she would still frequently clamber into my lap and purr softly as I petted her.

The morning she passed, she was in bed with my wife and me. It was early when she started meowing, loudly and urgently. I remember picking her up and taking her into the bathroom, then laying her on the counter. She turned her head a little to look at us, and then she quietly died. While it might be a case of anthropomorphizing, we think she woke us up to say good-bye. 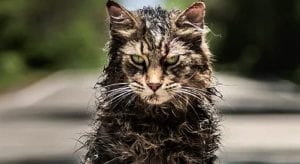 For those of us who have pets in our lives, an emotional bond forms that I think is legitimately real. I’ve told my son that when we adopt a dog or cat, we’re making a deal with them. We’re providing them with two square meals a day, a warm place to sleep, and a home that’s kind and where they’re loved. We also provide them with a death that’s painless, if circumstances manage it. Sometimes we’re not so lucky.

In movies, that bond demands to be taken seriously. When John Wick’s puppy is killed, we want to see him achieve retribution, and it’s all because of the bond. However, when a movie pays lip service to that bond but never commits to it, that’s when I get a little pissed off. And, guys? The remake of Pet Sematary pissed me off.

You probably know the film is based on the novel by Stephen King, and like the vast majority of King’s work, it’s set in the state of Maine.* The Creed family has relocated from Boston to the seemingly peaceful town of Ludlow. Louis (Jason Clarke) is a former ER doctor, and he’s taking a job as a medical professional at the local college. We get the sense that his wife Rachel (Amy Seimetz) is a little fragile. You can’t blame her since during childhood, her sister Zelda had a particularly nasty case of spinal meningitis and died in a tragic accident.

But everything is going to be just ducky for the Creed family now! Yes, they have bought a charmingly rustic house that’s located unnervingly close to a highway.** Yes, their neighbor Jud (John Lithgow) is a kindly old dude who might be withholding important information about the town. And yes, there might be unfathomable evil located on their property, which is something their realtor really should have covered at the showing. Otherwise, everything is peachy.

Okay, maybe less than peachy, because while unpacking is taking place, their eight-year-old daughter Ellie (Jete Laurence) sees a procession outside. A group of children wearing preposterously creepy animal masks is making their way through a wooded path. One of them has a dead dog in a wheelbarrow. While her two-year-old brother Gage (Hugo and Lucas Lavoie) could care less about this, Ellie’s curiosity gets the best of her. She follows them.***

Ellie discovers the infuriatingly misspelled Pet Sematary, a place used by the locals for generations. She’s understandably unnerved. She should be, because soon after, their beloved cat Church is killed on the road. Louis and Rachel don’t know how to break the news to Ellie, but Jud makes Louis an offer. In the dead of night, the two men take Church’s body beyond the graveyard, beyond the deadfall that was built decades earlier, and reach the real cemetery. Church is buried there. Soon after, he returns, and he comes back wrong.**** Then, things really start to suck for the Creeds. 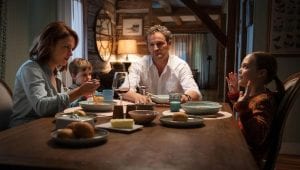 When you see a movie based on Stephen King’s work, you’re rolling the quality dice big time. While he strikes me as a legitimately good guy, and he is a solid storyteller, there’s no guarantee of quality when his books are adapted. We saw that recently with both the fun spook-a-blast adaptation of It and the godawful The Dark Tower. While the 1989 adaptation of Pet Sematary has gained a cult following, did I enjoy it? No. Was I more partial to this new iteration, perhaps? Also no.

Directors Kevin Kolsch and Dennis Widmyer have made a thuddingly obvious horror movie that leans into ominous portents and jump scares and leans far away from the emotional ass-kicking in King’s novel. This story is fundamentally a tragedy, and we should want the Creed family to be safe. But there are too many scenes of a THING JUMPING OUT or a REALLY LOUD NOISE. I like horror, particularly when it’s executed with style and wit. Here, I was constantly reminded I was watching a horror movie instead of experiencing the horror with the characters.

The screenplay by Matt Greenberg and Jeff Buhler makes some major changes to the source material. That’s okay, and I get their reasoning why. What this story needs to rival the power of the novel is strong characters and strong relationships between them. We don’t always get that. We’re told how much Ellie loves Church, yet there aren’t too many scenes allowing us to feel that. Since the film is all about grappling with the death of a loved one, the relationship between this little girl and her fluffball cat should be palpable, considering it’s the key to the whole story. King’s book drops us into the disorienting process of grief, and we understand why otherwise rational people would behave so idiotically. Here, we have little more than gore and booga-booga scares. 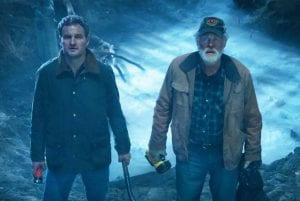 The cast does their best. It’s always a treat for me to see an old war-horse like John Lithgow, and while he doesn’t have the thick Maine accent good old Fred Gwynne had in the ‘89 film, he’s still charming. I liked Amy Seimetz as Rachel. She’s an intelligent performer, and with a better script, she would have had a launching pad for a shattering performance. The same goes for Jason Clarke, a talented performer who hasn’t quite gotten his due yet. He acts like crazy here, and it feels like he’s trying to make the film work through sheer force of will.

In closing, I should mention that Zana was partial to horror and very partial to Hannibal Lecter. Whenever she would hear Anthony Hopkins’ demonic voice, she would run into the room, leap on my lap, and purr enthusiastically. A movie about an undead cat helping to slaughter a family would have been right up her alley, but Zana deserved a hell of a lot better than Pet Sematary.

*It greatly amuses me that in King’s novel The Stand, the survivors of a national pandemic are all drawn to two locales. Those who lean selfish or evil head for Las Vegas. Those who are pure-ish of heart go to our beloved Boulder.

**Would it kill the town of Ludlow to put up some speed limit signs?

***I asked my son if he were confronted with this macabre sight, would he follow them to see what the deal was? His response was straight and to the point. “God, no! That’s stupid.”

****Want to learn how Hollywood professionals train cats? Check out this fascinating article.

Tim Brennan
Tim has been alarmingly enthusiastic about movies ever since childhood. He grew up in Boulder and, foolishly, left Colorado to study Communications in Washington State. Making matters worse, he moved to Connecticut after meeting his too-good-for-him wife. Drawn by the Rockies and a mild climate, he triumphantly returned and settled down back in Boulder County. He's written numerous screenplays, loves hiking, and embarrassed himself in front of Samuel L. Jackson. True story.
Tagged: amy seimetzdennis widmyerjason clarkejeff buhlerjete lawrencejohn lithgowkevin kolschmatt greenbergpet semetary