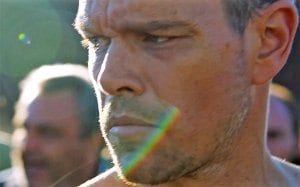 During a press conference in 2007, Matt Damon figured that he was all done playing amnesiac badass Jason Bourne. He said, “So all of that internal propulsive mechanism that drives the character is not there, so if there was to be another one then it would have to be a complete reconfiguration, you know, where do you go from there? For me, I kind of feel like the story that we set out to tell has now been told.”

Damon said this while promoting The Bourne Ultimatum. It was something of a rarity in the world of franchise filmmaking, an ending. The third film in the Bourne series, it showed the black-ops killer regaining his memories, his given name of David Webb, and most importantly, his humanity. One of the themes of the series is about a man designed to be a weapon who ultimately decides he doesn’t want to be fired. That’s superb, and that’s why I hold the Bourne films in such high esteem.*

Yet, things changed. Universal Pictures chairwoman Donna Langley recently said, “Even though Matt and Paul had been very definitive about not wanting to come back, we weren’t really willing to submit to that…Look, here’s what I think the goal is: to keep Matt Damon and Paul Greengrass doing Bourne movies till they can’t do them anymore.” Is that why Damon and wildly talented director Paul Greengrass returned to make the entirely unnecessary Jason Bourne? Did they have dreams of sliding down a mountain of money, Scrooge McDuck style? I don’t think so. Rather, I think it was one of those Road to Hell being paved with good intentions type of scenarios. I’ll explain, but let’s talk about the plot first.

We meet up with Bourne, now eking out a meager existence as a bare-knuckle boxer in Greece. He’s taken great pains to get off the grid, and now he just wants to be left alone to brood manfully. If you thought to yourself, “Jeepers, that sounds awfully generic,” you’d be right. I’m not saying I wanted Bourne to be pursuing a career as an ice dancer or anything, but the trope of the Sad Assassin is one that’s tough to get excited about. These films should never take the easy way out.

Anyway, things get rolling with the return of Nicky (Julia Stiles), formerly a CIA analyst in the previous films. Presumably due to guilt over her involvement in the shadowy Treadstone program, Nicky is now a freelance hacker. She’s working for Dassault (Vinzenz Kiefer), a Julian Assange type who is motivated to expose all of the CIA’s dirty laundry. While breaking into the CIA’s Black Ops files, which are helpfully labeled “Black Ops,” Nicky discovers A Shocking Secret. Bourne’s father Richard Webb (the great Gregg Henry) was secretly involved with Treadstone all along. Being a pal, Nicky loads the info onto an encrypted thumb drive, helpfully labeled “Encrypted,” and heads off to give Bourne the news.

But computer specialist Heather Lee (Alicia Vikander) has noticed the intrusion. She’s the protege of CIA Director Robert Dewey (Tommy Lee Jones), and she gives her boss a heads-up. He’s secretly working with Aaron Kalloor (Riz Ahmed), the head of sprawling social media company Deep Dream. Dewey plans to gain back-door access to their new platform, which will enable the CIA to have unprecedented surveillance upon their users. This puts the CIA on a collision course with Bourne. Again. Dewey sends an unnamed asset (the also great Vincent Cassel) to eliminate Bourne and Nicky, and the hunt is on.

Look, here’s the thing. Jason Bourne is fine, I guess. It’s got four decent action sequences, one of which is a car chase of such wanton destruction that it rivals the legendary chase in The Blues Brothers. It’s got a bunch of talented actors doing good work, and a director committed to making a film that’s of the moment in its examination of digital privacy. This is not a bad movie, it’s simply a movie that mostly feels like a retread.

Like the previous films, there are lots of scenes of Bourne staring pensively into the distance, walking rapidly through European locales, and rearranging the faces of hapless goons. However, the previous films raised the bar in the action genre to dizzying heights. Each film combined efficient character work with highly creative set pieces. Remember the scene in The Bourne Ultimatum, where Bourne helps a reporter to evade killers through a radio comm? That scene crackled with energy. We’d never seen anything quite like it. This film, however, is like a Greatest Hits album. Want a speeding car chase through narrow alleys? Check. Want Bourne beating the crap out of people in seconds? Check. Want scenes of CIA operatives yelling lines like, “Alpha team, sitrep!” in gleaming command centers? Check. There’s a lot of what you want, but not much of what you don’t know you want, and that’s a problem.

The script, written by Greengrass and Christopher Rouse, is two parallel stories, consisting of the Treadstone revelations and the social media stuff. Problem is, the first story is a dusty cliche, where the hero must grapple with the discovery of a secret about his father. Does this information fundamentally change Bourne or his world? Ah…not really. Plus, we’ve never seen Bourne’s father before now and, as much as I dig seeing Gregg Henry, why should we care about him as a character. The second story has nothing whatsoever to do with Bourne, and it feels like it was shoehorned into the plot instead of being allowed to develop naturally.

Matt Damon is not an actor who sleepwalks through roles, he has never been. As usual, he throws himself into the role of Bourne and shows us a new side of the character. Here, Bourne is pissed. He suggests an engine of enormous rage that powers Bourne, and Damon is such an exceptional actor that he’s able to provide aspects of the character that probably weren’t intended in the script.

His supporting cast is good, but they mostly represent missed opportunities. Vincent Cassel’s Asset is great in terms of the physical stuff, but he’s playing a hollowed-out killer. What are these guys like when they’re not on mission? What do they do? How do they feel? Cassel’s character could have been a great glimpse into what Bourne could have been, but instead he’s just a guy looking through a sniper scope. Same goes for Tommy Lee Jones’ crusty director. Like Albert Finney, Brian Cox, David Strathairn, and Chris Cooper in the previous films, Jones is yet another wily bureaucrat who disregards ethics and embraces brutality in the name of freedom.

However, two actors stand out  and are worth watching. Riz Ahmed’s Kalloor is fascinating. As a successful businessman who entered into a devil’s bargain with the CIA, he knows it’s just a matter of time before everything falls apart. Ahmed doesn’t have much to work with, but it’s interesting watching him wait for the other shoe to drop. As Heather, Alicia Vikander is a CIA officer with potentially shifting loyalties. Does she want to help Bourne? Does she want to support her boss, or is she positioning herself to take his job? We’re never quite sure what her ulterior motives are, and that’s what makes her compelling.

So why did Damon and Greengrass return to the well? Was it the hefty payday? Was it the fact that, other than last year’s excellent The Martian, Damon hasn’t really been in too many films lately that have connected with audiences? Was it because Damon and Greengrass did some of the best work of their careers on The Bourne Supremacy and The Bourne Ultimatum, and they thought they could make lightning strike again? Probably all of those reasons, plus the demand audiences have for more adventures with Jason Bourne, and Universal’s need for its own long-running franchise. All of that pressure was probably too much to resist, and rather than creating a new installment that pushed things in an exciting and unexpected new direction, they were compelled to give the fans what they wanted. That’s a shame, because with a character this good, and filmmakers this talented, the end result should be a hell of a lot better.

*Excepting, of course, The Bourne Legacy. Not even a jaw-dropping cast can keep that movie from being week-old garbage.

Tim Brennan
Tim has been alarmingly enthusiastic about movies ever since childhood. He grew up in Boulder and, foolishly, left Colorado to study Communications in Washington State. Making matters worse, he moved to Connecticut after meeting his too-good-for-him wife. Drawn by the Rockies and a mild climate, he triumphantly returned and settled down back in Boulder County. He's written numerous screenplays, loves hiking, and embarrassed himself in front of Samuel L. Jackson. True story.
Tagged: alicia vikandergregg henryjason bournejulia stilesmatt damonpaul greengrassriz ahmedtommy lee jonesvincent casselvinzenz kiefer