The Boarding House Is Burning

Let’s take a moment to consider just how much it must suck to be an actor of Middle-Eastern ethnicity in Hollywood. You’ve spent a fortune on headshots, spent even more on acting classes, and you’re ready to tackle the big time. There’s just one problem, and I know you know what it is.

Everybody wants you to play a terrorist.

Maybe you’re apolitical, and you simply want to tackle some challenging material or star in a Marvel movie. Maybe you believe in representation, and you want to show that a person that originally has roots in the Middle East can play…well…anyone.* But you get that offer, and you can imagine what happens on screen. A zooming overhead shot over a war torn city, while the adhan, the call to prayer, plays ominously. A jittery camera shows a throng of humanity crammed into narrow streets and then…there’s you! Holding an AK-47 while crammed into the back of a battered van, looking like a member of the Osama bin Laden Glee Club.

You can’t even with that.

Here’s where it gets tricky. On the one hand, Middle Eastern folks can join black people, Asian people, Hispanic people, LGBT people, women, and everyone else that isn’t straight, white, and male as being grotesquely caricatured in films. It’s the 21st century, for heaven’s sake, and it wouldn’t kill filmmakers to have an iota of nuance and respect.

On the other hand, do filmmakers always have a responsibility to be respectful, especially if the point of their movie, which is a period piece, is a cynical lack of respect? The new film Beirut lives uneasily in a gray area between those points of view. 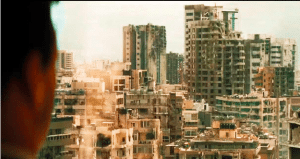 We’re dropped into Lebanon’s capital city in 1972, a time of horrendous fashion and intimidatingly large sideburns. One of the owners of said sideburns is Mason Skiles (Jon Hamm), a rakish American diplomat. He loves the city, but recognizes its complexity. Mason and his wife Nadia (Leila Bekhti) have taken Karim, an orphaned 13-year-old Lebanese boy, under their wing. They’re hosting a party and everything is going swimmingly until Mason is breathlessly confronted by his CIA officer buddy Cal Riley (Mark Pellegrino). The CIA has found out that Karim’s big brother Rami (Ben Affan) is actually a big terrorist, having been involved with the 1972 Munich massacre.

Cal’s CIA colleagues want to take Karim into custody and sweat him for Rami’s whereabouts. While Mason attempts to negotiate with them, Rami and his people arrive and start shooting up the place. They toss Karim into a van and, during the chaos, Nadia is shot and killed. Needless to say, the party is not a success.

Flash forward to 1982, and Mason is now in Boston arbitrating labor disputes. We know he’s depressed because he 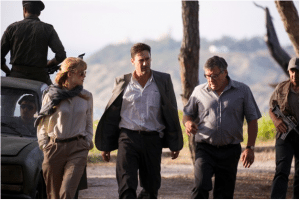 drinks and he’s shaved off his sideburns. He’s contacted by the U.S. Government and asked to return to Beirut urgently. The bad news is that Cal has been abducted and the kidnappers demand that Mason negotiate Cal’s release. The worse news is that Beirut is in the midst of a civil war and has been blown six ways to Sunday.

Mason is forced to work with shady State Department officials Gaines (Dean Norris), Ruzak (Shea Whigham), and Shalen (Larry Pine). CIA officer Sandy Crowder (Rosamund Pike) is assigned to be his minder. Together, they must navigate a labyrinth of shifting loyalties, ethical gray areas, and the omnipresent threat of violence to rescue Cal. 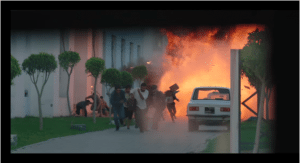 Guys, Beirut is not what I would call a bundle of laughs. It’s an enthusiastically po-faced movie, with lots of scenes of sweaty people barking orders into phones. It’s also a throwback to the paranoid political thrillers of the ‘70’s and ‘80’s, the kind of films we don’t see in theaters much anymore.

Brad Anderson directed, and he’s a filmmaker with a strong sense of place and how characters relate to those places.** His Beirut is a once-elegant metropolis that’s become a war zone. Rival factions plot to take control, and everyone seems to have forgotten the people trapped in the middle. As I watched the film, I kept thinking of it as a modern-day version of Casablanca, where a cynical American must learn to care again against the backdrop of an exotic locale. If you remove the romantic aspects from Casablanca, you’ll have a pretty good idea of how Beirut feels.

The script was written by Tony Gilroy, whom you know as the writer of the Jason Bourne franchise, Rogue One, and the very good Michael Clayton. He excels at stories about people who are morally compromised, who don’t have time for heroism as they’re simply trying to get a job done. While his screenplay gets into surface level details about the Lebanese civil war, it never takes sides and cheers the Americans or boos the Israelis or PLO. There’s plenty of blame to go around, but the story is more about creating a particular vibe of immorality intertwined with duty.

His characters can be thinly sketched, but at least we have a solid cast playing them. Solid professionals like Dean Norris and Shea Whigham do their thing and do it well. After her jaw-dropping performance in Gone Girl, I expected Rosamund Pike to become a massive star.*** Since we live in the darkest timeline, that didn’t happen. Still, Pike’s CIA officer Crowder is a smart professional, and Pike plays her as a woman who doesn’t miss much.

At the end of the day, this film is a vehicle for Jon Hamm, and I’m very okay with that. Look at his performances in 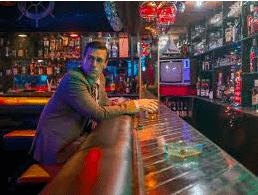 Mad Men, The Town, and Baby Driver. Hamm should also be a massive star, but again, darkest timeline. As Mason, Hamm doesn’t overdo it as a world-weary alcoholic. Other actors would go for a bedraggled look, like a thoroughly kicked puppy. Hamm is more subtle, and he plays the majority of his scenes with a dimmed light in his eyes, as if he’s been diminished by trauma.

We know that Beirut was not actually filmed in Beirut. It was shot in Morocco, with drone shots of demolished neighborhoods in Syria added to portray devastation. Does all that add to a narrative that the Middle East is little more than a smoking crater populated by terrorists? Honestly, I don’t know. Anderson and his cast and crew certainly have the right to make an artistic statement, and the cynicism of the characters toward the region is kind of the point.

***I also expected Hillary to win, so it shows what I know.

Tim Brennan
Tim has been alarmingly enthusiastic about movies ever since childhood. He grew up in Boulder and, foolishly, left Colorado to study Communications in Washington State. Making matters worse, he moved to Connecticut after meeting his too-good-for-him wife. Drawn by the Rockies and a mild climate, he triumphantly returned and settled down back in Boulder County. He's written numerous screenplays, loves hiking, and embarrassed himself in front of Samuel L. Jackson. True story.
Tagged: beirutben affanbrad andersondean norrisidir chenderjon hammmark pellegrinorosamund pikeshea whighamtony gilroy