The Avs and the NHL – Skating on Thin Ice 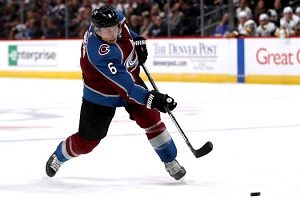 In case you missed it, and most of us did, the Colorado Avalanche and the NHL season has begun. The truth is that I really haven’t paid attention to the Avalanche since they won the Stanley Cup back in 2001, but that doesn’t mean that I don’t love the sport. Hockey players blend the perfect amount of blue-collar toughness with graceful athleticism. It’s the ultimate team sport in which an assist is as good as a goal, and sacrificing a tooth in the process is well worth it. But the sport that brought us Gordie Howe, Wayne Gretzky, the movie Slapshot, and the single greatest sporting event in history with USA’s victory over the Soviets in the 1980 Winter Olympics, has recently let me down. Here are ten reasons why hockey and the Avalanche are skating on thin ice.

1) Has anyone mentioned to the NHL that starting the season while the NFL, College football season, and MLB baseball playoffs are all happening is rather questionable? What’s next? Are you planning to schedule the Stanley Cup finals during the Victoria’s Secret Fashion Show?

2) The regular season means next-to-nothing. Sixteen teams, more than half of the NHL, makes the playoffs. You would have to be an awful team to miss the playoffs, and really lose your fan base if you missed it six-of-the last-seven years….Oh, sorry Avs.

3) You can name 50 baseball players, every starting quarterback, and most of the NBA, but you struggle naming a hockey player after Sidney Crosby and Alex Ovechkin. Long gone are the days of Peter Forsberg, Joe Sakic, and Patrick Roy. Our big name is Gabriel Landeskog.

4) There are NHL hockey teams in Nashville, Tampa Bay, and Las Vegas. Meaning that somewhere there’s a kid in New Mexico standing in a puddle of hose water with his blades on, assuming that the water will freeze and an expansion team will come his way.

5) I used to know the entire third line of the Stanley Cup winning 1996 Avalanche squad. Now I have to google to find out that the coach’s name is Jared Bednar, and the mascot is a Saint Bernard named Bernie.

6) Do you remember when the NHL season was cancelled due to a lock out back in 2012? Neither does anyone.

7) I’m confident that the Avs will fix their playoff draught, and improve on their 22-56-4 record. Just like I’m sure that the commissioner will fix the all-star game, the overtime issue, and lower the NHL dental plan premiums.

8) What if overtime was decided by a fight between your two biggest enforcers instead of a shootout? Yes, it’s barbaric, but imagine the ratings.

9) Rivals like Darren McCarty and the Red Wings or Scott Bertuzzi and the Canucks are long gone. Being mad at the Columbus Blue Jackets just doesn’t seem natural.

10) I’ll go to a Nuggets game to see Lebron James, a Rockies game to see Clayton Kershaw, but unless you’re a huge Dion Phaneuf fan, the league is lacking star power.

Pencil me in for a game or two at the Pepsi Center as I always appreciate the talent on the ice and a cold brew. But unless the Avalanche stay relevant for much of the season, wake me up when the playoffs start. And text me if the Avs finally make it in.

Alan Tapley
Alan Tapley is an educator, author, and blogger who has lived just outside of Boulder for the last twenty years.  His published work includes two novels, two children’s books, a series of cartoons in the Minneapolis Star-Tribune, and multiple sports related articles. His love for family and the state of Colorado is only matched by one thing, his passion for sports.  The first baseball game he ever attended was at Wrigley Field, before there were lights.  At the final Bronco game at the old Mile High, he allegedly cut out a piece of his seat in the South stands.  But regardless of being here for the Avalanche’s last Stanley Cup, the Rockies only World Series appearance, and all the Broncos’ Super Bowl Victories, his wife never fails to remind him that he wasn’t at the University of Colorado in 1990, like she was.  The year the Buffs football team won the National Championship.
Tagged: Alex OvechkinColorado AvalancheGabriel LandeskogJoe SakicNHLPatrick RoyPeter ForsbergSidney CrosbyStanley Cup