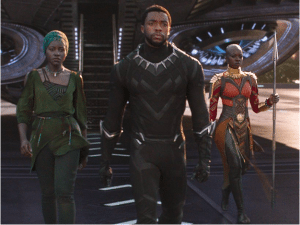 My kid’s favorite superhero is the Black Panther. Not Spider-Man. Not Captain America. Not Batman. Not even Blue Beetle. He’s a gigantic fan of Marvel’s T’Challa, the ruler of the fictional African nation of Wakanda. But why is he a fan of that guy? Well, let’s hear it from the horse’s….ah….10-year-old’s mouth.

“He’s smarter than Iron Man and Batman. He’s sneaky, He fights battles he knows he can’t win for honor and to help. He held the Infinity Gauntlet, for crying out loud! He must be a great hero!”

Now, there are a couple of details you need to keep in mind. First, my boy had the great misfortune to have a father that’s an unrepentant nerd. Other dads play catch with their kids and lovingly recite football stats, or work on restoring a ‘67 Mustang together. My kid knows nearly every hero that’s been on the Avengers, and can tell you precisely how many people have been Robin. All I’m saying is, I’m not Ward Cleaver.

Second, my kid is lily white. Big surprise there, since his mother and I are also white. Let’s not forget that the vast majority of superheroes are white dudes. My kid is lucky, you might even say privileged, to have a galaxy of superheroes to be into, that look like him. Using that logic, you would expect a white kid to adopt a white hero, right? Nope, my boy looks up to a strong, smart, proud black man. Skin color doesn’t occur to my son. He just thinks T’Challa is awesome.

Take it a step further and, for a moment, pretend you’re black.* You’re used to seeing films in the Marvel Cinematic Universe, used to seeing a few people that look like you, but they’re not usually the hero, more a hero. It sucks, but you’ll take what you can get. But then a movie comes out written and directed by black people. The vast majority of the cast looks like you, and instead of being treated as noble martyrs, thugs, or goofballs, they embody the wide range of human experience. The hero? He’s awesome. The film? Also awesome. That’s why diversity matters, and that’s why the latest film in the MCU, Black Panther, matters.

The good news is, you don’t have to have seen everything else Marvel has done up until now to know what’s going on. 2016’s Captain America: Civil War introduced T’Challa (Chadwick Boseman) in the midst of a gigantic superhero slugfest. His father, T’Chaka (John Kani), was the king of Wakanda and was killed. Now, T’Challa is ascending to the throne, and he’s returned home.

To outsiders, Wakanda is a desperately poor country with little influence. It’s a useful fiction, since Wakanda sits on a mountainful of vibranium. This indestructible metal isn’t just what Captain America’s famous shield is made from. Rather, it’s allowed Wakanda to become the world’s most technologically advanced nation, and they choose to hide the truth of their country from the rest of the world.

Why? People would kill to possess vibranium, people like Ulysses Klaue (Andy Serkis), a South African mercenary. He’s stolen some of the metal. T’Challa wants it back, and Nakia (Lupita Nyong’o) a Wakandan spy and an old flame of T’Challa’s, knows where to find Klaue. Sound simple? Not quite, since bigger problems exist in the form of Killmonger (Michael B. Jordan). He knows about Wakanda’s cultural supremacy, and knows that technology could be used to bring justice to black people all around the world. If he has to set the world on fire to get justice, well, tough break.

I watched Black Panther next to a white couple on a date. As the credits were rolling, they looked at each other, smiling. “That was really good,” they said to each other in a kind of shocked wonder. I get it, because by and large, Marvel Studios output has been characterized by a zippy sense of humor, strong characterization, mediocre villains, and a commitment to making solidly pretty good movies. Marvel isn’t out to reinvent the wheel, they’re all about quality and consistency, a fun time out at the movies. 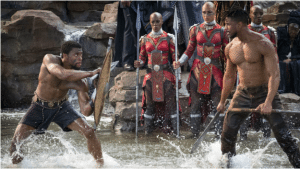 Done right, though, superheroes are our modern mythology.** They utilize metaphor and outsized characters to comment on the human condition. Director Ryan Coogler mines this rich vein, and he’s made a sprawling operatic epic that embraces themes of social responsibility and the pulpy fun of a dude in a cat suit kicking people with equal enthusiasm. Too many filmmakers, like Christopher Nolan, reflexively shy away from comic book tropes when telling a story involving costumed heroes. Not Coogler. He worked with a wide variety of experts on African culture, politics, and history to create a Wakanda that feels like a real place, then added a layer of Afrofuturism for flavor. His action scenes are solid. There’s one, however, a car chase set in South Korea, that stands out from the rest. While it would have been nice for all of the action to have had the propulsive energy of this scene, Coogler isn’t quite making that kind of movie.

Coogler wrote the screenplay along with Joe Robert Cole, and there’s more of a focus on ideas here as opposed to elaborate fight sequences. One of the mantras of Marvel has always been, “With great power comes great responsibility.” The script examines the responsibility that Wakanda and T’Challa have to the rest of the global community. What do those wielding power owe to everyone else? Are the Wakandans obliged to do more than stand up for themselves? This is smart screenwriting that confidently balances character, themes, and action.

As the titular Panther, Chadwick Boseman takes the strength and nobility he began with in Captain America: Civil War, and adds a suave layer. There are definite echoes of James Bond in his performance. Boseman frequently gets pushed to the background by other members of the cast, and when you’ve got heavy hitters like Angela Bassett, Forest Whitaker, Daniel Kaluuya, Winston Duke, and Martin Freeman, it’s not surprising. 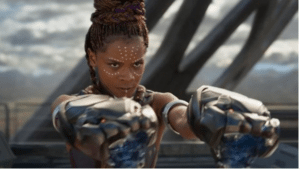 Letitia Wright is a standout, playing T’Challa’s sister Shuri and the Q to his Bond. She supplies her bro with a ton of cool gadgets, and she steals every scene she’s in by supplying the majority of comic relief. I’m reasonably confident that when you see this film, you’ll miss a chunk of her jokes due to the audience laughing at other jokes.

The MCU has developed a reputation for having a villain problem. For every charismatic sleazeball like Loki or Alexander Pierce, there’s also a deeply dull Ronan the Accuser or Malekith. Michael B. Jordan’s Killmonger is easily one of Marvel’s best antagonists. To be sure, he’s hissable. But Killmonger also has a distinct point of view and a reason he’s doing what he’s doing. It’s a strong and sympathetic performance, and considering this is Coogler and Jordan’s third collaboration and they complement each other beautifully, it’s not hyperbole to compare their work to the partnership of Martin Scorsese and Robert De Niro.

My kid hasn’t seen Black Panther just yet. Due to my wife being a confident introvert, we’ll likely give it time for the crowds to thin out before the Brennans make the family trek to the theater. I know he’ll be into the effects, the tactile feeling of the world of Wakanda, the in-jokes for Marvel nerds like us. Consciously or not, another thought will burrow into his cerebral cortex. To quote another movie from the MCU, he’ll learn that, “It’s not about you.” He’ll be cool with that.

*I know that’s hard considering we’re in the Front Range, not exactly known for its racial diversity. Give it a shot.

**If you were into Black Panther and want to dig into the source material and the world of the characters, I’m happy to help. Start by reading Black Panther by Christopher Priest, which introduces Everett Ross and portrays the Panther as Marvel’s answer to Batman. Move on to Black Panther: A Nation Under Our Feet by Ta-Nehisi Coates, which dives into the politics, culture, and mythos of Wakanda.

Tim Brennan
Tim has been alarmingly enthusiastic about movies ever since childhood. He grew up in Boulder and, foolishly, left Colorado to study Communications in Washington State. Making matters worse, he moved to Connecticut after meeting his too-good-for-him wife. Drawn by the Rockies and a mild climate, he triumphantly returned and settled down back in Boulder County. He's written numerous screenplays, loves hiking, and embarrassed himself in front of Samuel L. Jackson. True story.
Tagged: andy serkisblack pantherchadwick bosemandanai gurirajoe robert coleletitia wrightlupita nyong'omartin freemanmichael b. jordanryan coogler