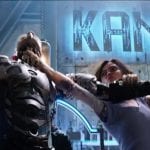 As much as we love to bellyache about Hollywood failing to come up with new ideas, there are two irrefutable facts we have to contend with. The first is that, frequently, when something blazingly original is released theatrically, audiences shun it. Speed Racer was a failure. Cloud Atlas was a failure. Mortal Engines was a failure. The second fact? As long as there have been movies, there have been adaptations. It’s hardly a new phenomenon. George De Maurier’s 1895 novel Trilby, which I’m sure you all have read, was adapted into a silent film way back in 1915. This kind of thing has been... Read More