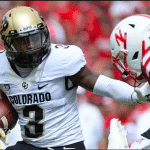 In a sea of scarlet, the Colorado Buffaloes renewed their longtime rivalry with the Nebraska Cornhuskers and exited Lincoln with a dramatic 33-28 victory.  Wide receiver Laviska Shenault Jr. continued his heroic play as his touchdown reception with just over a minute left spoiled the coaching debut of local quarterback legend, Scott Frost. Nebraska dominated the first half with a retro game plan from the early 90’s of running the ball and stout defensive line play, but two early turnovers kept the Buffaloes within range trailing only 21-17 at halftime.  The Buffs made a few adjustments in the... Read More