Can Sleeping In Improve Your Health? 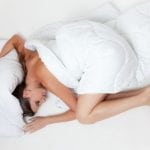 New research suggests people who get too little sleep during the week can make up for it on the weekends. According to a study published in the Journal of Sleep Research, people who slept less than five hours each night throughout the week had an increased risk of early death compared to those who slept six to seven hours every night. People who get less than five hours during the week, but who catch up on some of that lost sleep on the weekend, do not have the same risk. These results suggest that sleep is not a risk factor for mortality if it is combined with a medium or long weekend sleep. Some... Read More