Love Or The Lack Of It 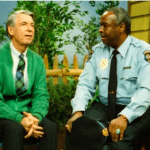 These days, it seems like we Americans spend the majority of our time screaming at each other. There’s been a lot of talk about a lack of civility, a lack of respect. There’s a feeling of a yawning chasm that, every day, gets a little wider. There’s a feeling that we’ll eventually be swallowed by it. You know what? I’m part of the problem. I wish it weren’t so, but it is. Just this last May, President Donald Trump referred to some undocumented immigrants as “animals” who would be removed from the United States “at a rate that’s never happened before.” My first mistake? Deciding... Read More