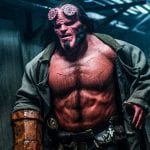 Some characters lend themselves to endless interpretations. Batman is one of them. Let’s say you’re planning to make a Batman movie, and by some miracle, you don’t have to attach it to an expanded universe or follow up on threads from a previous installment. Warner Brothers gives you a $90 million budget and sends you on your merry way. What kind of film should you make? Lucky you, because you have options! Just a few of them might be:   A goofy comedy that’s tonally similar to the 1966 Batman television series A horror movie where Batman is trapped within Arkham Asylum A procedural... Read More