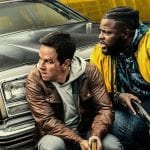 Spenser Confidential is streaming on Netflix.   Gather round, children, and let Graybeard Tim regale you with tales of the Long Ago Times! Back in the day, there were three tiers of screened entertainment. The first was theatrical films. This was where the Scorseses, Spielbergs, and Coppolas of the world lived, and actors like Harrison Ford and Tom Cruise strode the world like a colossus. In short, it was the big time. The second tier was television, and at the time it was looked at as a decidedly lesser art form.* You had formulaic cop shows with lawmen (and they were almost always men) who... Read More