Posts Tagged With ‘ how to stop procrastinating now ’

Procrastination May Be Hardwired into Your Brain: But Here’s 3 Tips! 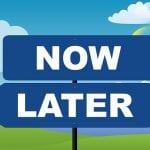 Are you putting off until tomorrow what you could be doing today? If that’s you, it might not be just a personality trait. A study of over 250 men’s and women’s brain scans revealed that a brain region involved in motivation tends to be larger among people who put things off, while communication between that part of the brain and another involved in taking action appeared to be weaker. This study is the first to scan the brain to identify a neural basis for procrastination. Participants in the study were between the ages of 18 and 35 with no history of neurological or psychiatric disorders.... Read More