Nikola Jokic and the Youth Movement 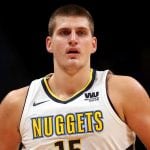 The Denver Nuggets had a busy week as they inked Nikola Jokic to a five-year/$147 million max contract, and then lured Will Barton back to the team with a four-year/$50 million deal.  So, I hope that you were entertained by last year’s team that barely missed the playoffs, because they’re not going anywhere soon. Jokic, only 23 years old, was due to make a mere $1.6 million this season but the Nuggets aggressively signed the former second-round pick to a long-term deal to keep him off the market.  Combine the existing contract of 23-year-old Gary Harris (four-year/$84 million) and the probable... Read More