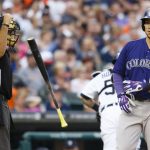 With the Colorado Rockies off to a 20-15 record behind solid pitching and the bats of Charlie Blackmon and Nolan Arenado, we should be relatively satisfied.  After all, the Rockies have already played more road games (23) than any other team in the league, and the assumption is that the slumping bats will come alive once the thin air and short fences do their thing.  But after a team batting average of just .228 and some early struggles that may not correct themselves, here are four moves that Colorado may want to look at…sooner than later.   Find a veteran hitter to plug at first base.... Read More