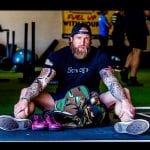 I recently had the honor of speaking with Blake Cook about his experience with the military and how he is crushing his goals while using CBD. Blake is 30 years old and was born and raised in West Virginia. He joined the military in 2010 to join the Army to be in the infantry and was sent to Fort Bragg NC. “I wanted to serve my country because of watching 9/11. I enjoyed the Army and the strong bond between a group of guys that became family.” Blake said. “In 2012 I was blown up by an IED and spent the next 25 months learning to walk and talk again. For years I lived in pain because I refused... Read More