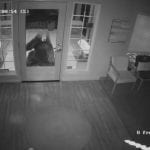 An elderly couple living in Jefferson County was met with a shock as they investigated a noise downstairs Monday night. The couple found a bear in their kitchen which had broken through the screen door with her cub and was eating a loaf of bread. The bear panicked and attacked the man to protect her cub, at which point the main punched the bear and his wife beat it with a baseball bat. Both mama bear and cub fled back through the screen door, leaving the man with a few scratches and bruises, but nothing major. His wife was unharmed. Colorado Parks and Wildlife was notified of the incident and went... Read More