CPW Says Do Not Put Bobcats in Car with Children 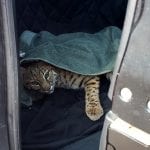 A Colorado Springs woman is being chastised by Colorado Parks and Wildlife for placing an injured bobcat in her vehicle with her child. When the woman saw the animal and initially picked it up, the animal was dazed and unresponsive to the movement. The bobcat had been hit by a car and was injured. The woman called CPW to come retrieve the animal. When CPW removed the bobcat from the car, it was hissing, growling, and clawing in an effort to protect itself. CPW ended up euthanizing the animal due to the extent of its injuries. “It could have been a very dangerous situation for this woman if... Read More