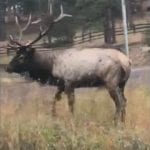 In Evergreen Colorado, a mother and daughter were suddenly attacked by a bull elk while driving through the area. The daughter was recording some elk that were in the surrounding area they were driving through when a bull elk decided they were too close. The camera turns away as the elk charges the car with its horns. There was significant damage to the passenger side of the vehicle.  Read More

Woman Attacked By Elk in Estes Park Caught on Camera 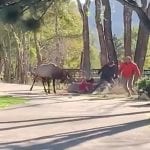 Two people were injured after an elk charged a woman in Estes Park earlier this week. Jason Clay, a spokesman for Colorado Parks and Wildlife, said, “She miraculously came out unharmed. She had some scrapes. She was not transported and did not require medical attention.” An employee got in between the woman and the elk with his vehicle, causing the elk to attack the vehicle and giving the woman time to escape. A man was also injured after jumping out of the way of the elk, though he did not make contact with the animal. He slipped on a rock while jumping away and has been hospitalized. The... Read More